To those who celebrate, I hope you had a lovely Christmas. 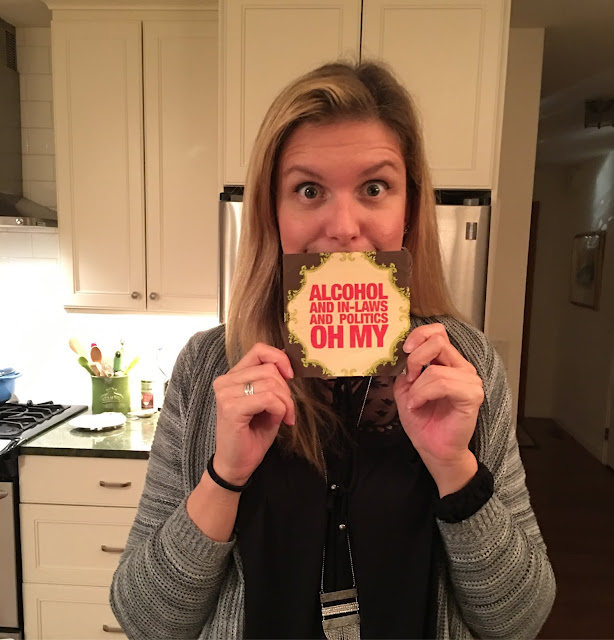 When I woke up, I found that Santa was very good to me. Who knew he was a blockhead? 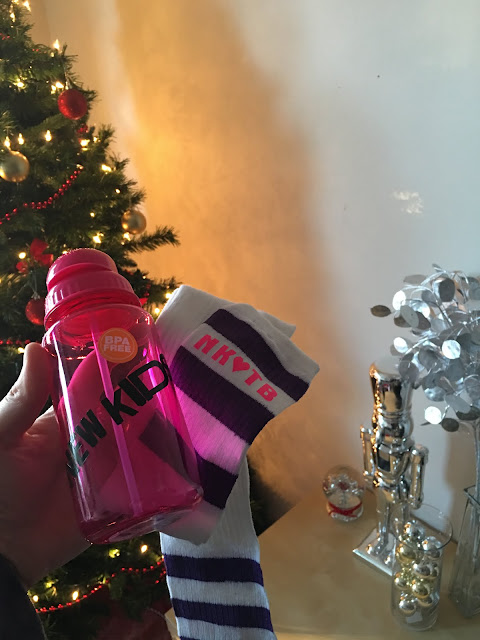 My favorite drag queen even gave me a gift. 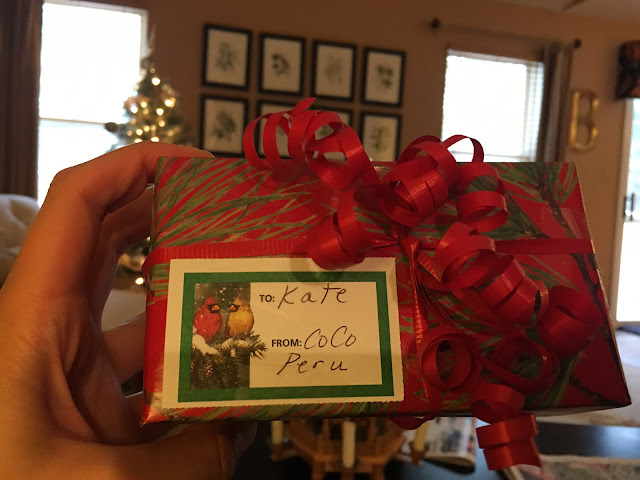 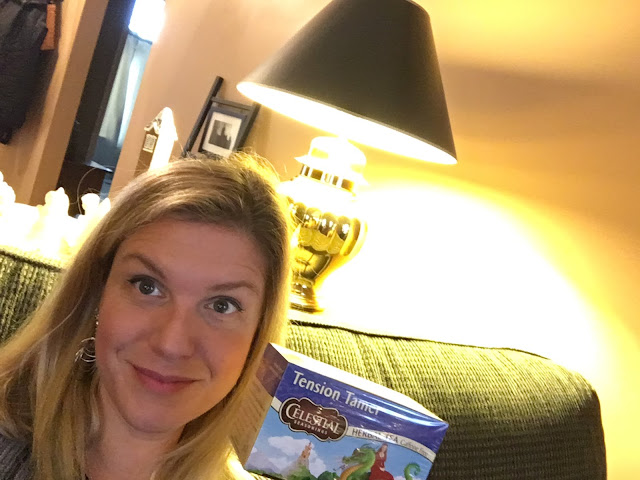 If you don't know Coco, I highly recommend that you go ahead and watch this:


The morning then progressed to me eating my weight in these:
I then posed for more pictures of this ball of cuteness than I care to admit. 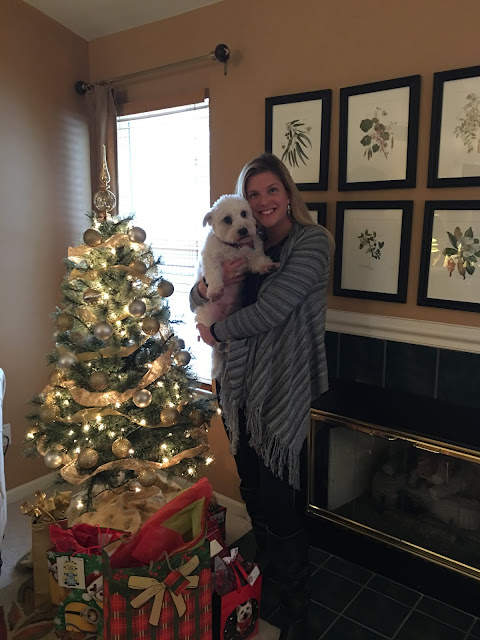 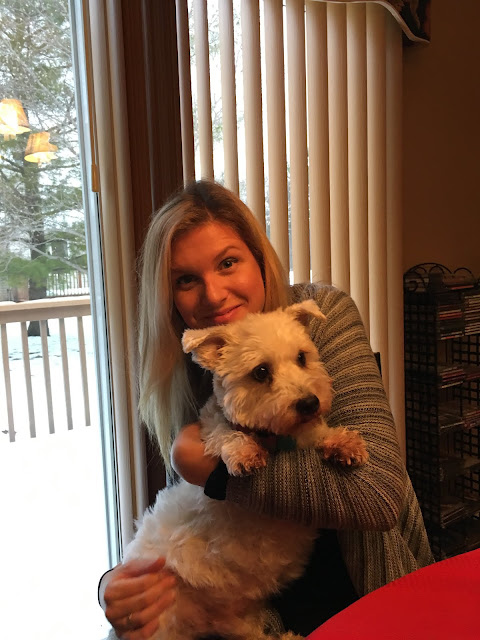 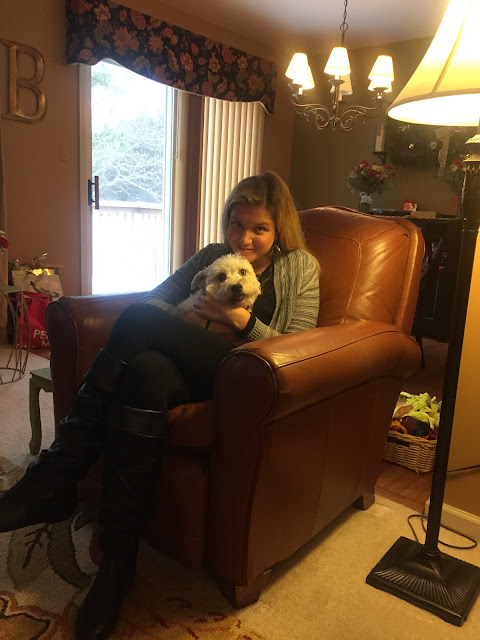 Oh, how he humors me.

And, I did pose for some pictures with humans as well. 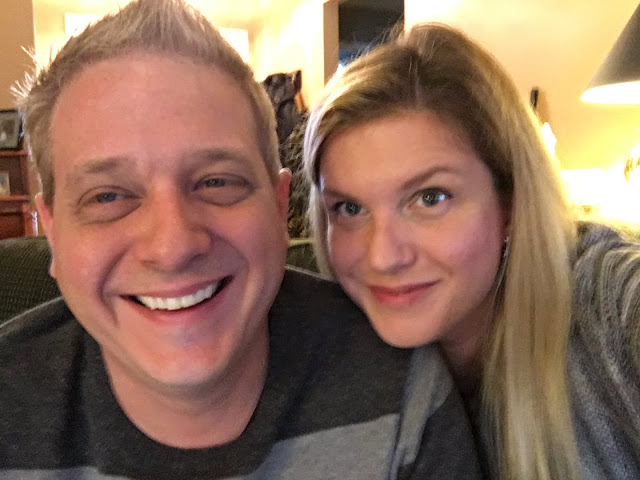 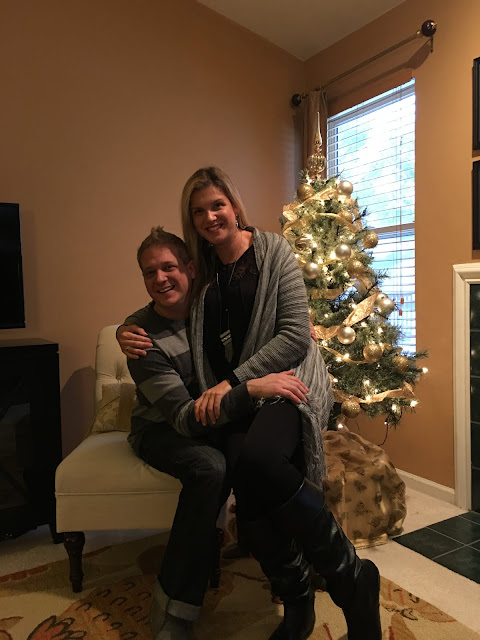 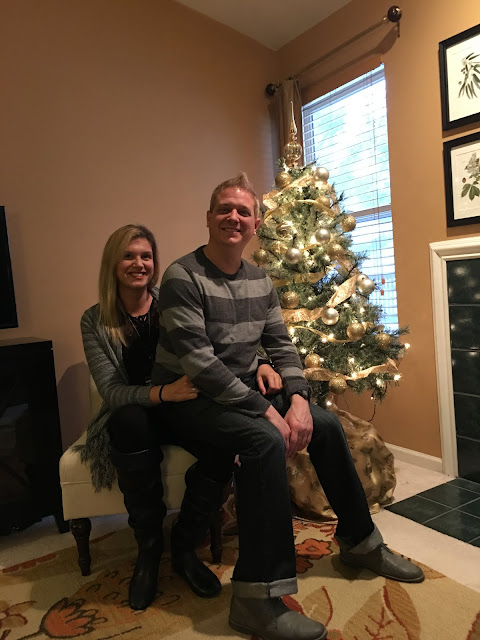 Matching outfits and musical laps for the win.
Posted by Kate Brindle at 1:52 PM No comments:

Vegan maple cookies are good. Really good. Want to know how I know this?

Because they cause car accidents.

On Thursday, Keith Lenart, and I started on a run of Michigan's upper peninsula, Wisconsin, and Minnesota. We were about two hours into our drive when the weather started to get bad.

After driving through some fairly heavy snow, we pulled off into a rest area. As we were leaving, we were discussing said cookies, and Keith tried to grab one out of the box I was holding. Unfortunately, he took his eyes off the road just long enough to veer into a snowbank.

We laughed about the accident, and counted our lucky stars because the car ended up right between a tree and a road sign stake.

Then, we realized how badly we were stuck. We also realized that the bumper was lying in the snowbank.

So, we attempted to rock and push the car out. We had a bit of luck at first, but then it wouldn't budge.

At this point, two guys, who clearly took pity on the pathetic downstate residents who were walking around in two feet of snow in Converse, began to help us. For forty-five minutes, we pushed, swore, pushed, swore, pushed, got mud kicked up on us, and swore some more before finally giving up and admitting that we needed to call a tow truck.

Not wanting to spend the money on a truck, we decided to give it one last go.

I closed my eyes and cross my fingers, and Keith gunned it!

I couldn't believe, but the plan worked. We were in the clear!

Or, so we thought.

During our cheers, one of our helpers quickly pointed out that Keith now had a flat tire. Since we hadn't seen much civilization behind us, we feared we were in the middle of no were.

Thankfully, when I checked my phone, we ended up being right near the town of Grayling. Even better? We were a mile away from the exit.

Here's where we were stuck: 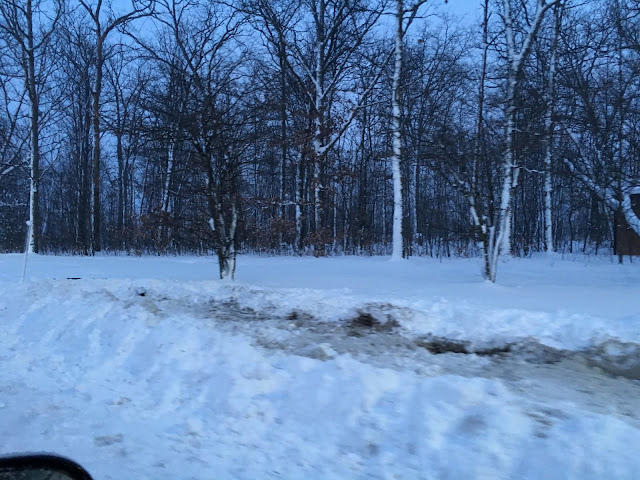 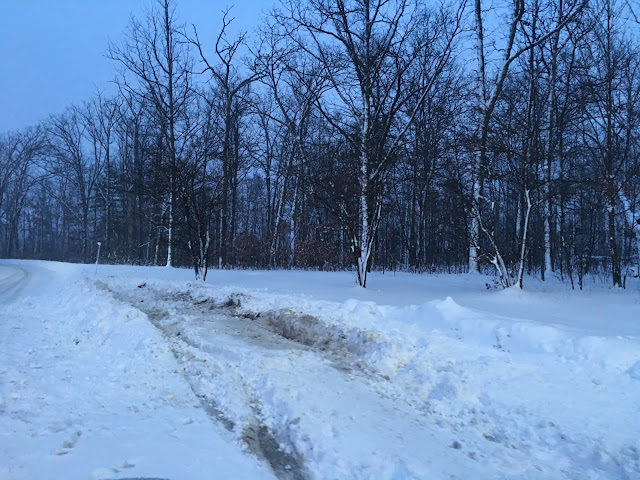 When we pulled off in Grayling, Keith popped into a gas station, and the employee told us there was a tire place right on the corner.

Just as we turned into the tire place, they were closing. We quickly got out of the car. and begged them to stay open just a bit longer so they could look at our tire.

Thankfully, they obliged. While they fixed the tire, we tied Keith's bumper back on.
They ended up fixing the tire for $15, and we were on our way.

We drove in near white out conditions all the way to Sault Ste. Marie, and I don't think I've ever been so afraid in my entire life. I had truly never driven in such awful conditions.

Somehow, as if the stars aligned from the universe, we made it to the show with five minutes to spare.

The show was a lot of fun, but I was too tired from being flustered all day to get any pictures.

The next day, we drove to La Crosse in equal amounts of blizzards.

Thus, a black bean burger with avocado was in order to combat the stress of driving for eight hours in such conditions.
After La Crosse, we drove to Sauk Rapids where the temperature was -15! I felt pain in parts of my body that I didn't even know existed. 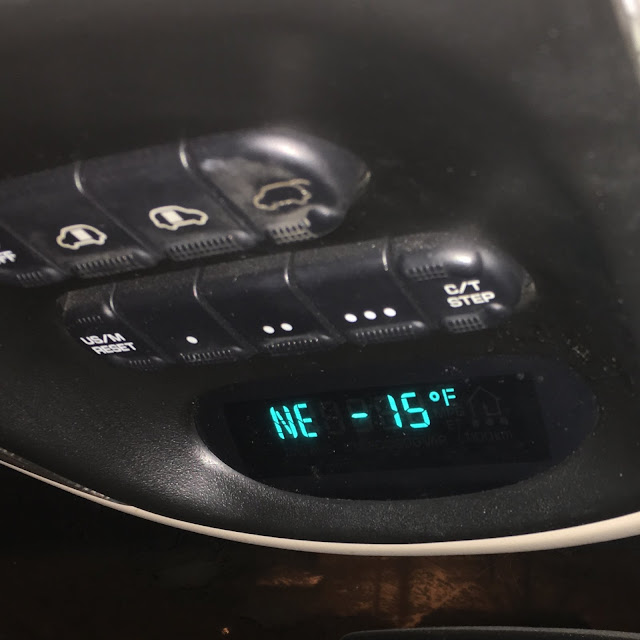 After the show (where I saw a woman, who was wearing a short-sleeve t-shirt, outside smoking - now, that's a commitment to nicotine!), I thought the weather couldn't get much colder. But, nope, I was wrong! In the morning, we woke up to this:

On Wednesday, I had another show in Minnesota (this time in Windom). And I experienced a first:

I've been on the road for quite some time, and I've experienced everything from ultra fancy hotel rooms (complete with mini-bars and robes) to crappy motel rooms that don't even have deadbolts.

At first, the idea seemed kind of bizarre, and then I realized, it was brilliant! Unloading my car without having to deal with the cold? Yes, please! 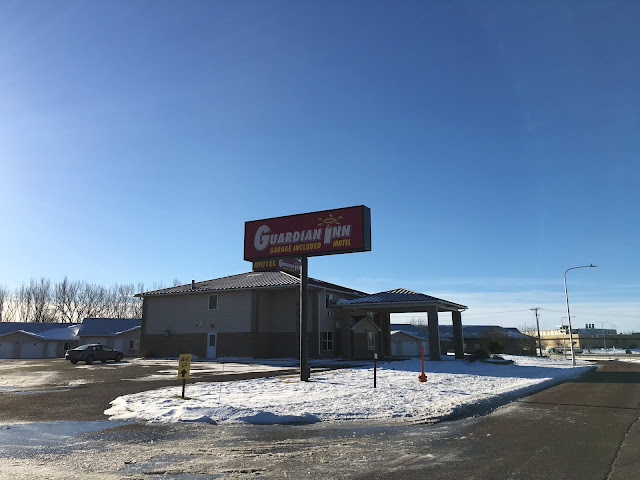 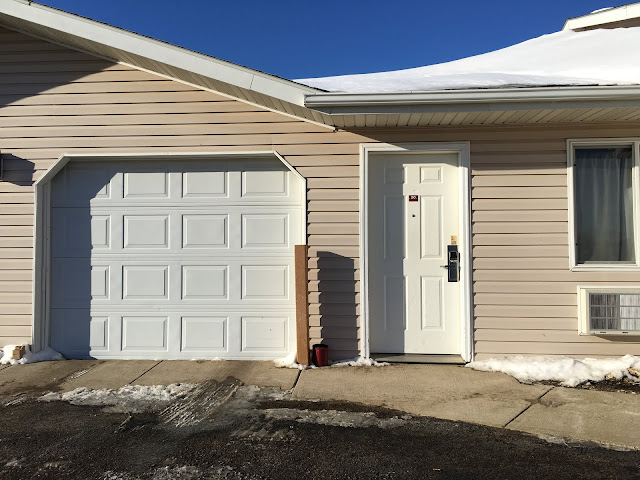 In Windom, I got to work with Rob Brackenridge, who is an absolute delight! 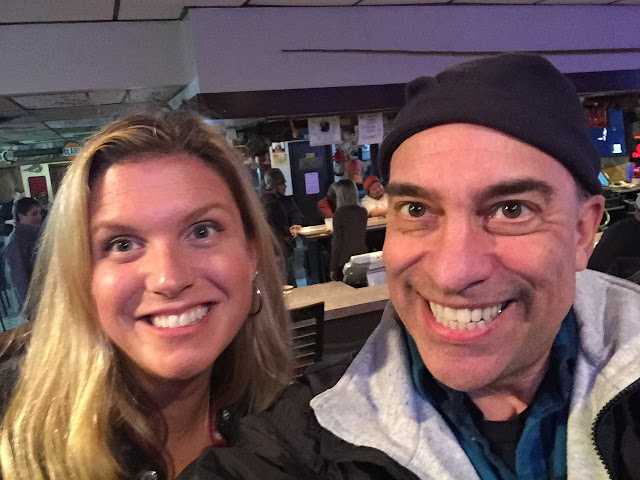 The first time I met him, we worked together in the Outer Banks, North Carolina. During our week-long gig, we spent the first couple days paddling around in kayaks, and the last couple days dodging a hurricane.

After this trip, I think I much prefer hurricanes to blizzards. At least, they're warm!