Mike Sorrentino (better known as “The Situation” on MTV’s Jersey Shore) has been offered a “substantial” sum of cash by fashion retailer Abercrombie & Fitch to stop wearing their clothes. Earlier this week, an Abercrombie spokesperson announced, “We are deeply concerned that Mr. Sorrentino’s association with our brand could cause significant damage to our image. We have therefore offered a substantial payment to Michael ‘The Situation’ Sorrentino and the producers of MTV’s Jersey Shore to have the character wear an alternate brand…and are urgently waiting a response.”

The spokesperson went on to say that The Situation’s regular habits of creeping on chicks, avoiding grenades and getting in his GTL (as his published book Here’s the Situation is subtitled), combined with his regimen of boozing and fighting, are harming its “aspiration” brand image and “may be distressing to many of our fans.” Translation: he’s worried about The Situation acting like a douchebag, and wearing Abercrombie clothes while doing so. 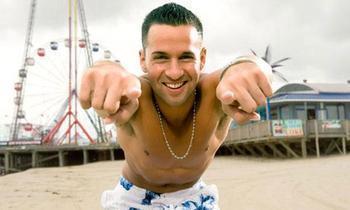 However, what the spokesperson fails to realize is the type of people who actually do wear Abercrombie & Fitch - douchebags. When is the last time you saw a lawyer doing pro bono work in the courtroom sporting an A&F logo polo shirt with its collar popped? Or how often do you see a doctor engaged in saving children’s lives wearing tight, clingy pants with “Abercrombie” spelled out across her butt? But, go to any bar anywhere in the US, and I guarantee you’ll find people clad in Abercrombie gear doing one of the following: obnoxiously screaming, obnoxiously fighting, obnoxiously grinding on the dance floor and/or obnoxiously puking from drinking too many Jägerbombs.

If I were The Situation, I would take the money and gladly never wear another stitch of Abercrombie & Fitch. Not only is the brand associated with the aforementioned douchebaggery, but as Dwight A. McBride argues in his book, Why I Hate Abercrombie & Fitch: Essays on Race and Sexuality, the company has discriminatory hiring practices (In fact, they recently paid out $40 million in a class action lawsuit where they were accused of favoring white employees and discouraging people of color from even applying for jobs) and racist advertisement campaigns.

I am fully aware that the cast of the Jersey Shore might want to support douchebaggery, but they hopefully don’t want to support a racist corporation by wearing its clothing. So I say, take the money and run! After all, that “substantial” sum could probably buy a lot of hair gel and fake tanning memberships.
Posted by Kate Brindle at 7:53 PM No comments:

Value World (AKA my favorite thrift store in Ann Arbor) was having a 50% off sale this weekend. So I scored a ton of great (read: horribly bubblegum) music on cassette for under a buck. I know what you're thinking: who in the world still has a cassette player? If you answered "Kate Brindle," you would be correct. You see, once upon a time, my CD player got stolen from my car, and as a future theft deterrent, I decided to install a tape player. It's worked like a charm, and it also allows me to completely indulge in my love for 80's/90's pop music.

An added bonus to toady's purchase? My boyfriend is seven years younger than I (I know, I know, cougar-schmougar), so I doubt he's heard any of these songs since he was around three when they were released. Wow, I can't wait to torture him, ahem, I mean share this beautiful music together.

Without further ado, here's a sample of what I picked up:

How badly does this song make you want to dance on a desk?

Posted by Kate Brindle at 11:19 AM No comments:

Some pictures of my shows at Joey's Comedy Club in Livonia, Michigan (where I worked last week with Bryan McCree and Jeff Arcuri). Photo credit: Garri Madera. Check out his work here.

Why, yes, I always color coordinate my clothes to match the stage backdrop.
Posted by Kate Brindle at 11:00 AM No comments: