My review of the NKOTB cruise

On May 14, 2010, I went on the official New Kids on the Block cruise. This is also the anniversary of the day that Danny Wood first graced the world with his presence. I wrote a review of my time on the ship that was originally posted on Zoiks Online, but I figured I'd post it here too.

If you'd like to see all of my pictures from the trip, they're on facebook. Normally, I would post them all on here, but frankly, I'm way too lazy. Plus, I'm a bit of a friend whore, and I enjoy collecting e-pals. For those of you who need some immediate boy band eye-candy, I did include a few pictures at the end.

At last, the review everyone has been waiting for is finally complete. I know the masses out there have been holding their collective breath and anticipating a summary of my trip on the second annual New Kids on the Block cruise. And by masses, I mean 22 people. Well, I have finally stopped hyperventilating, and I am happy to share a full report from the S.S. Squealing Like a 12-Year-Old.

For those of you pondering if the New Kids on the Block (NKOTB, if you’re nasty) are even still around, allow me to provide some background information. Danny Wood, Donnie Wahlberg, Joe McIntyre, Jon and Jordan Knight were members of the most well-known boy band in the late 80’s/early 90’s. They broke up in 1994, reunited in 2008, released another album (appropriately titled “The Block”) and have been touring ever since. If you’d like more information about them (including birthdates, middle names, height/weight, etc.), email me directly. And in case you’re wondering, they definitely still have “The Right Stuff” (Sorry, I couldn’t resist). After all, they did sell out the O2 Arena in London and they can still do the running man with the best of them. So please, save the Old Men on the Block jokes for at least another 15 years.

The cruise featured concerts, meet and greet opportunities, themed deck parties (by the way, mixing Bud Light with all white clothing will turn a white party into a beige party very quickly), beach and trivia games hosted by the Kids and 2,000 screaming women. Ahem, make that 1,990 screaming women, 5 screaming men and another 5 bored men (who I presume were husbands along for the ride). While I have been a fan for more than twenty years, the other cruise attendees’ fandom made mine pale in comparison. I may have followed them around the country, but my obsession stops at knowing all of their bodyguards’ social security numbers and shoe sizes.

I was shocked by how accessible all of the Kids were. They strolled the Lido deck, grabbed snacks from the ship’s cafeteria and swam in the ocean (once we were docked, of course) without getting harassed. I’m sure there were some women who had slight heart attacks upon seeing them, but everyone managed to keep their cool and nobody mobbed them or attempted to grab them in their no-no spots. One of my favorite moments of the cruise was when I was on the glass elevator and spotted Joe McIntyre (my favorite New Kid). I immediately got off at the next floor, raced down the stairs to find him and asked him for a picture. My mom, who was also along for the boy band extravaganza, immediately became a fan upon meeting Joe. “He rubbed my back while we were taking the picture!” she screamed. And then we shared a beautiful (read: slightly pathetic) mother-daughter bonding moment of gushing over a pop singer.

Since there is another one booked for next year, you might be asking yourself, “who should go on a New Kids on the Block cruise?“ Or you might just be pondering when the cast of “The Jersey Shore” is finally going to go away. Well, I can’t help you with the latter, but I can certainly provide you a list of the former.

1. Straight (or hetero-curious), single men who are attracted to obsessive women. Bonus points if you look like Donnie.

2. Anyone who enjoys the song “Shots” by Lil Jon, as it was played nearly on repeat and was the cruise’s unofficial anthem.

3. Members of other has-been boy bands. After all, the New Kids don’t have time to hook up with every passenger. So if you’re from Take That, Five or the Guys Next Door, there’s a pretty good chance you might score on board.

4. People who love the 80’s. If you’re looking for a place to bust out some shoulder pads and over-permed hair, the New Kids cruise is for you!

6. Generous people who would like to finance Kate Brindle’s trip. Said people also receive the high privilege and distinct honor of watching me fist pump to “Shots.”

When I disembarked from the ship, I almost immediately began having withdrawals from singing “Oh, oh, oh, oh, oh, Hangin’ Tough” (while waving my hands in the air like I just don’t care, of course). While waiting for my flight, I overheard a woman talking about “texting Jordan.” I nearly gasped. She was texting the Jordan Knight? I quickly tapped her on the shoulder and said, “Oh my God! You know Jordan Knight? Were you on the New Kids cruise?” She burst into a grin and said, “no, no, my son’s name is Jordan. I was talking to him.”

Ah! Apparently not everyone is nearly as obsessed with the New Kids on the Block as I am. Something tells me my mother might be now though. 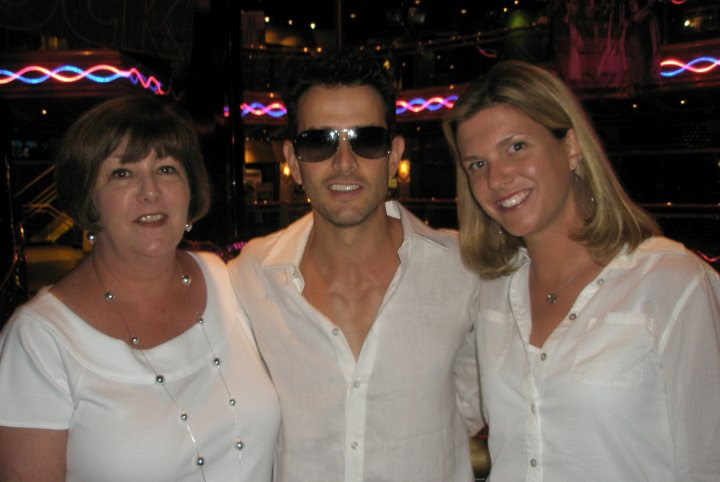 My mom and me with Joseph Mulrey McIntyre. AKA The man I've loved for twenty-one years. AKA Perfection. Okay, so I'm *slightly* gushing and I'm a bit obsessed, but you must admit, the man does have some amazing clavicles... 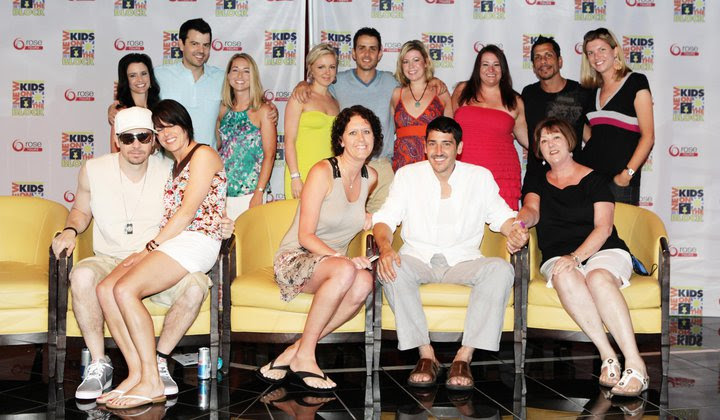 Meeting them for the second time. I didn't get to stand next to Joe as he was already "claimed." 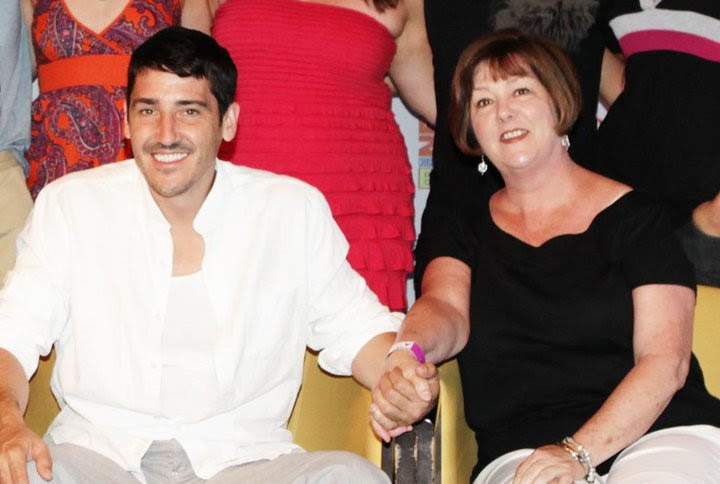 Count on receiving a formal wedding announcement by July. 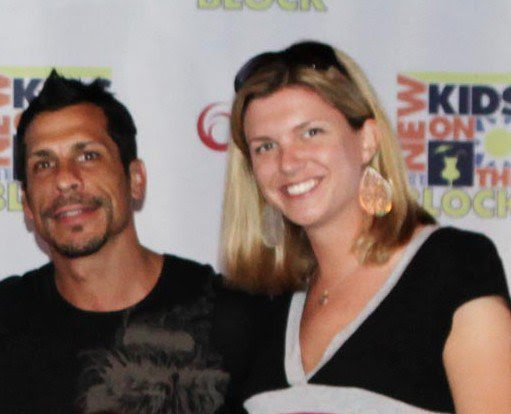 I'm quite the expert at cropping photos to make them look like the person I'm pictured with actually knows me. Not trying to brag, but Danny Wood did make brief eye contact with me...and he didn't seem nearly as put off by my sweat as he did when I met him last year.

Count on receiving a formal wedding announcement by July.
Posted by Kate Brindle at 6:29 AM No comments:

My most recent road adventure took me to four states in two different time zones and featured performing in a comedy contest, traveling to Amish country for the first time, prank calling and needing a translator to understand hecklers in the deep South.

My first stop was a comedy contest in Columbus, Ohio. Well, to be fair, it was slightly outside of Columbus, Ohio, but I can't remember the name of the town right now (much like a lot of the places I perform), and I'm pretty sure they root for Ohio State, so Columbus will have to suffice. I didn't get a chance to take any pictures of the actual contest, but I did snap a quick picture of the facade of the venue: 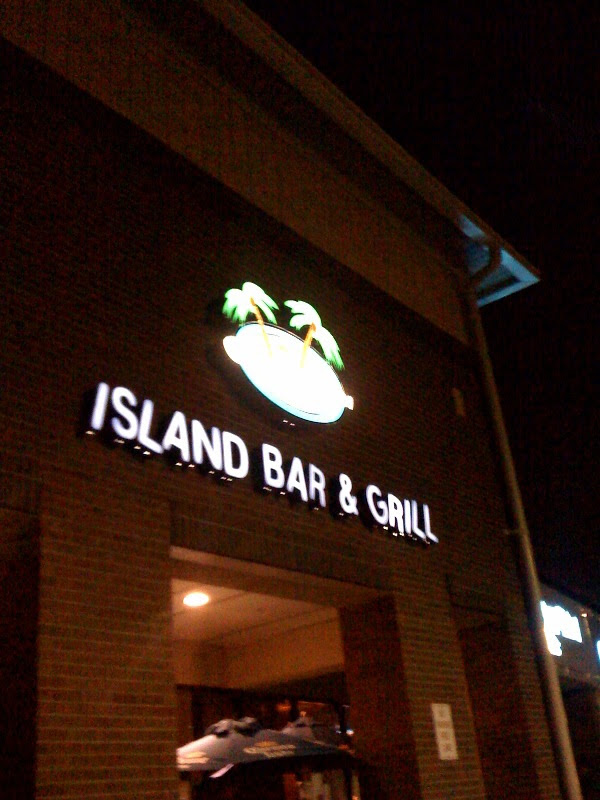 See? Proof that I was there.

I advanced to the semi-finals in the contest, however, I had to withdraw due to being out of town and having other gigs on the nights of the semis. Boo, hiss. Oh well, here's hopin' I can do the contest next year and win over some Buckeyes. 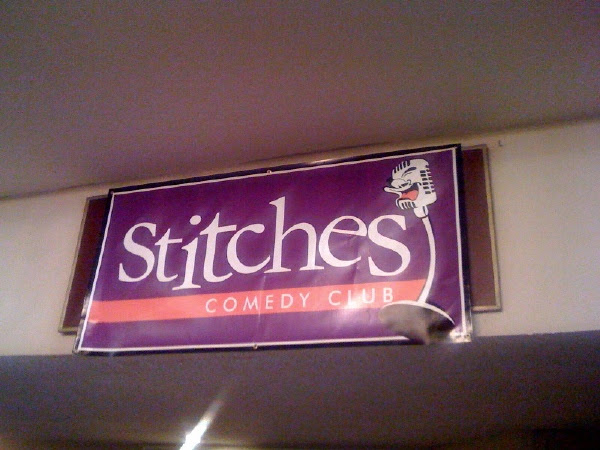 On Friday and Saturday, I performed at Stitches Comedy Club in Lancaster, Pennsylvania for the first time. The club is located in the heart of Amish country. Amish stuff, as seen here, is all the rage: 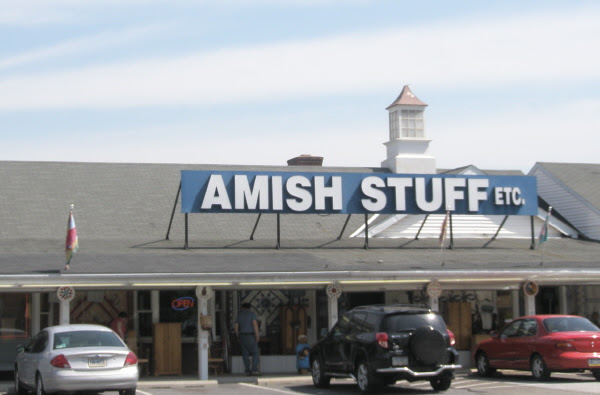 Stitches is located in a hotel that has a golf course and walking trail, which I took advantage of during my stay. These are some shots from my Saturday morning walk: 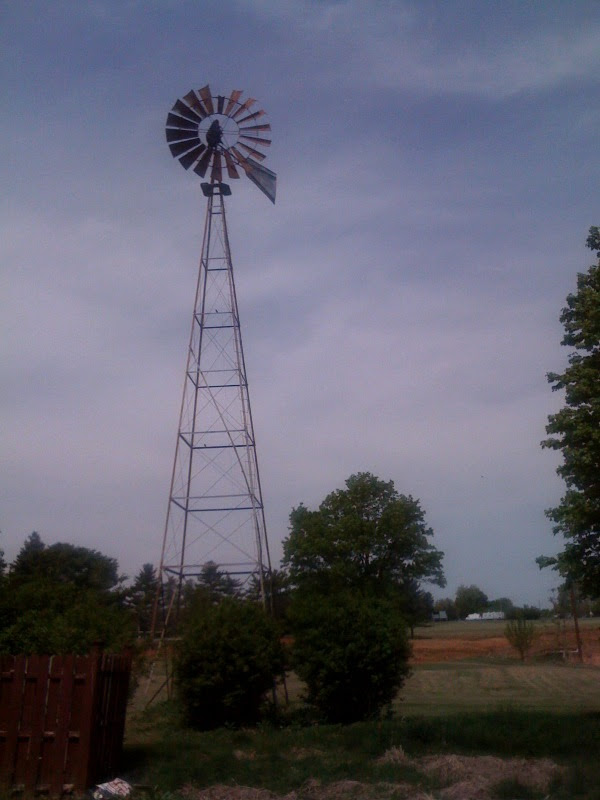 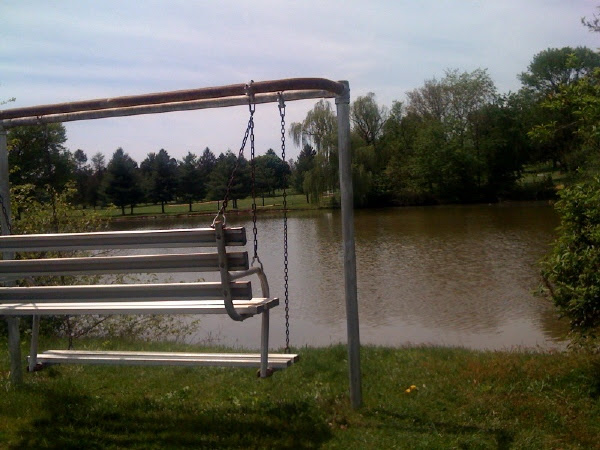 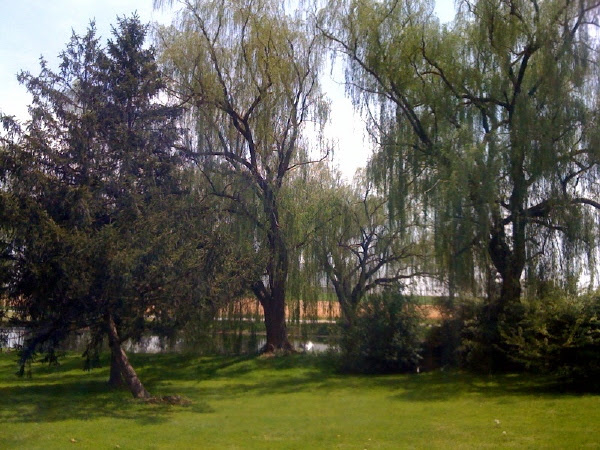 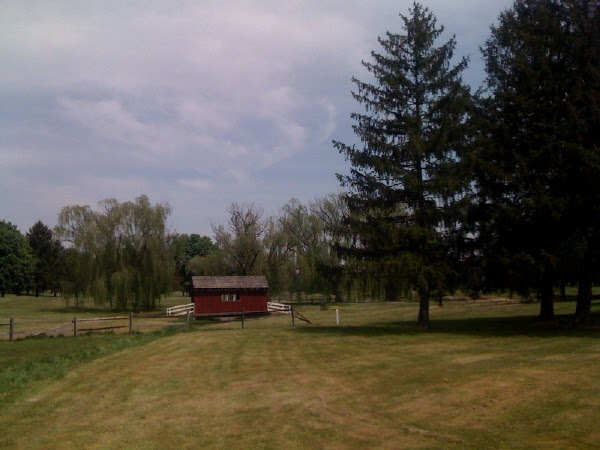 Also staying at the hotel during the weekend were drum and bugle core convention attendees and Great Pyrenees show dogs. So during my walk, I felt like I was on set of both "Best in Show" and "Stripes."

After Lancaster, I headed down to my ol' stomping grounds of Norfolk, Virginia. While I was in town, I got to do an open mic at the New Belmont. It was great to catch up with old friends and see the funny peeps of Hampton Roads. It was in Norfolk that some pretty kick-ass prank calling happened too. I don't think I've ever mentioned it on this blog, but if there's one thing I love nearly as much as the New Kids on the Block, it's prank calling. And I'm happy to report that three prank calls were successfully pulled off. I'm shocked anyone answers unrecognized numbers any more, but I am so very glad they do. Perhaps if stand-up doesn't take off, I might have a future as a Jerky Girl.

I also got a chance to walk the beach, which was most enjoyable. 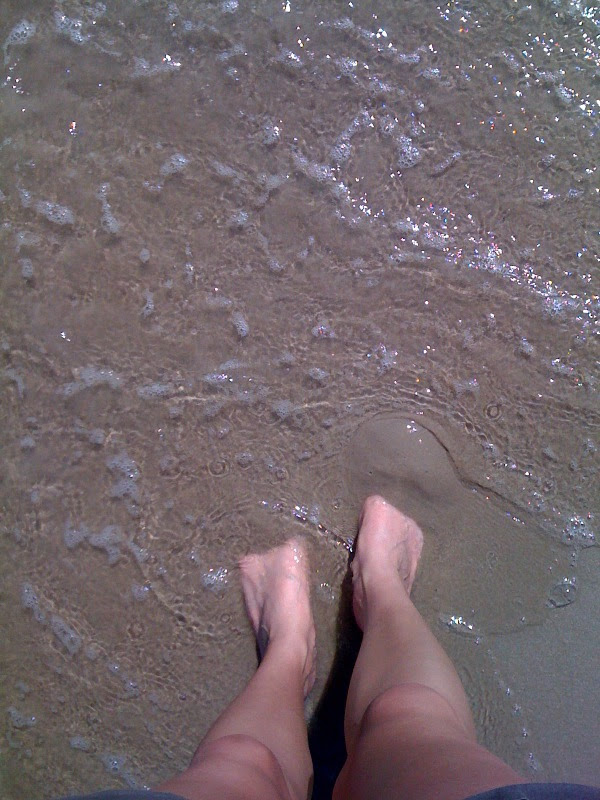 I do have toes, they're just very shy.

After Norfolk, I headed to Alabama to perform at the Del Ranch. 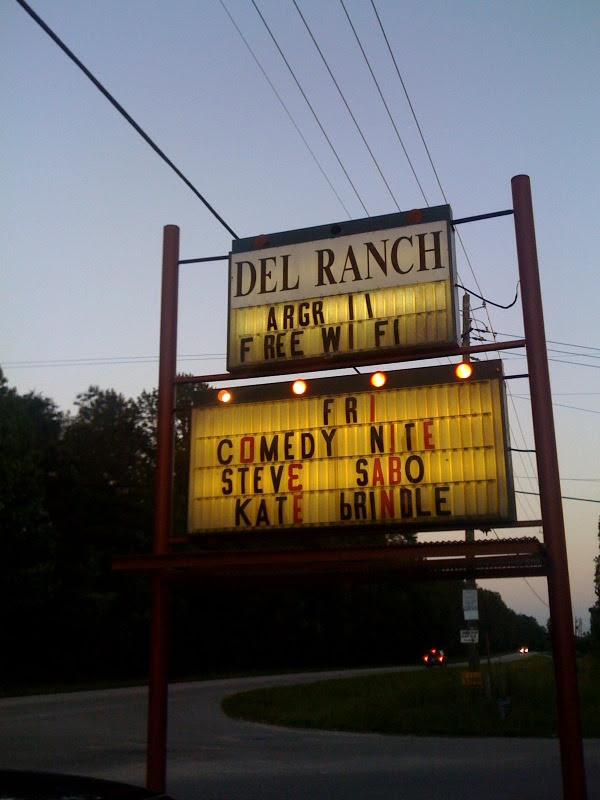 My name in fancy lights. Not sure how I feel about wifi getting billing over my name, but still, something tells me I have arrived!

Not only that, but Steve Sabo and I got to sign boobages. 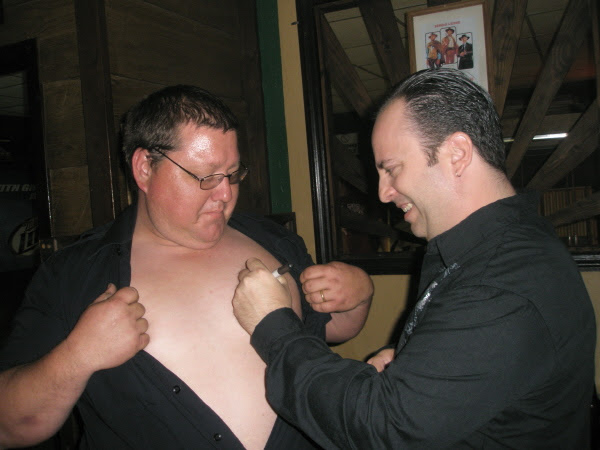 Allow me to repeat myself, I have arrived!

Audience members were also treated to me modeling the thong underwear Steve sells after shows. 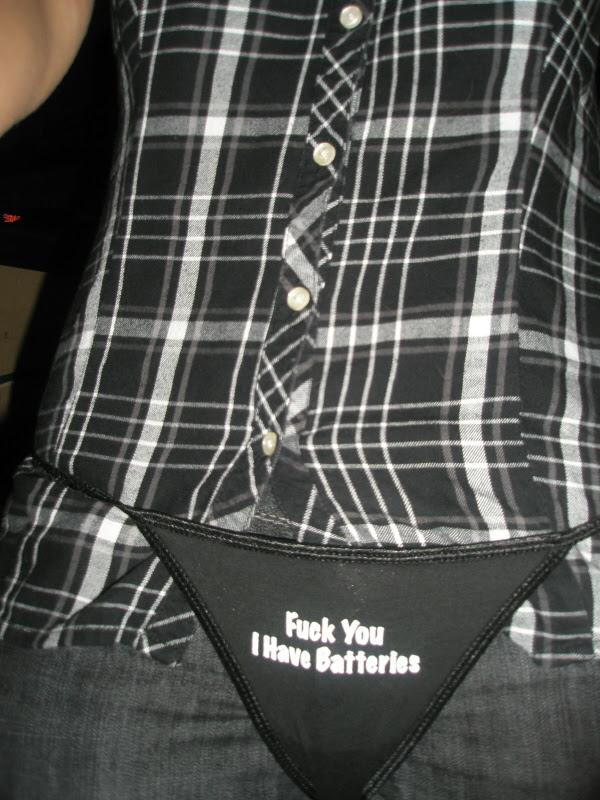 In case you're wondering, yes, I have a matching pair underneath. If you're looking to pick-up a pair (they make great presents for grandma), you can go visit SteveSabo.com.

After performing at the Del Ranch, Steve and I drove to Huntsville to hang out with friends, Scott, Jaci, Eric and Spencer. This is also where we watched Iron Man 2 and UFC 113...and consumed too much alcohol. Oh yeah, and I kicked some major booty at trivia: 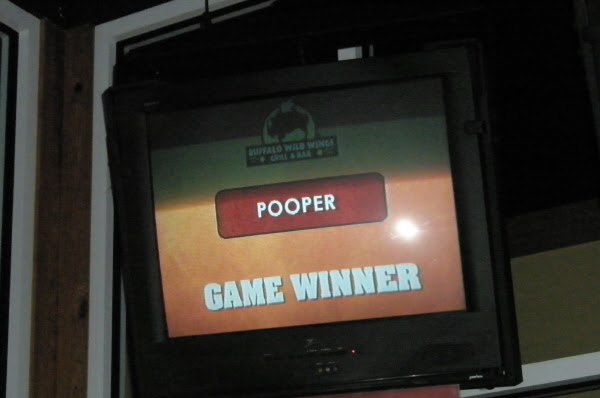 If you're curious about why that's my name, stop by one of my one-nighter shows. You’ll be treated to a riveting story about cross-country travel, sexy devil Halloween costumes and lack of bowel control.

I’m not quite sure how to conclude this post, or if a conclusion is even necessary, so I will once again say, I have arrived! This time, as a trivia master.
Posted by Kate Brindle at 3:59 AM No comments: