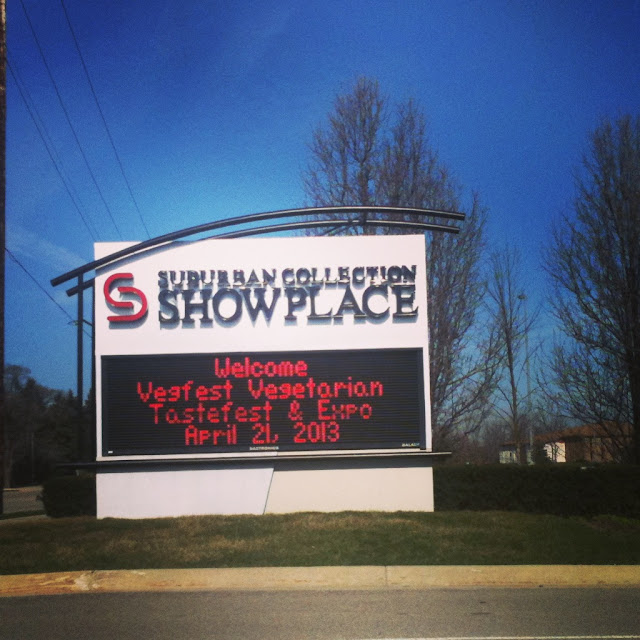 On Sunday, I headed to VegFest!  If you haven't been, VegFest is an annual plant-based extravaganza!  It features speakers, food samples, non-profit organizations, famous vegans and auh-mazing food (vegan ice cream sandwiches for the win).

I started the day off by volunteering for the Animals and Society Institute. 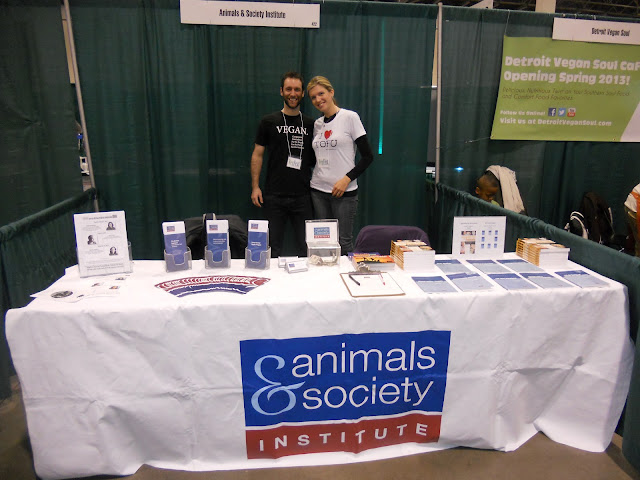 I then went to a speech by ultramarathoner Scott Jurek.  I can barely get through a 10K, and this guy does 100+ milers?  Holy How-the-hell-are-his-knees-not-blow-out (oh, yeah, because he's a super healthy vegan), Batman! 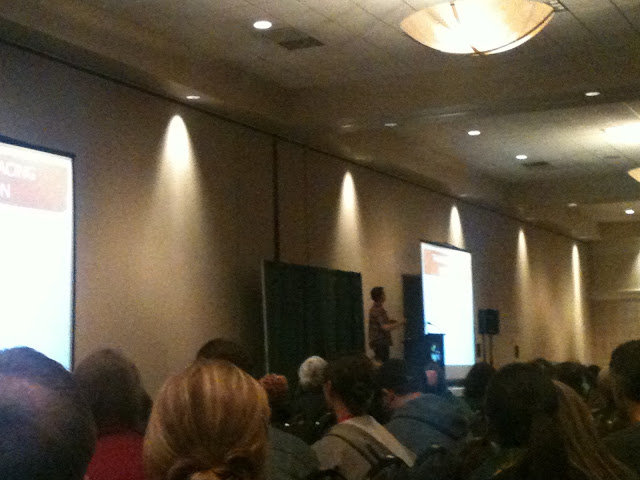 After Scott spoke, I went to a presentation called "Compassion and Comedy" by stand-up comic Carol Leifer.  I was so inspired by her speech.  She gave a charming and heart-warming account of her transition to veganism, filled with many punchlines and cute stories. 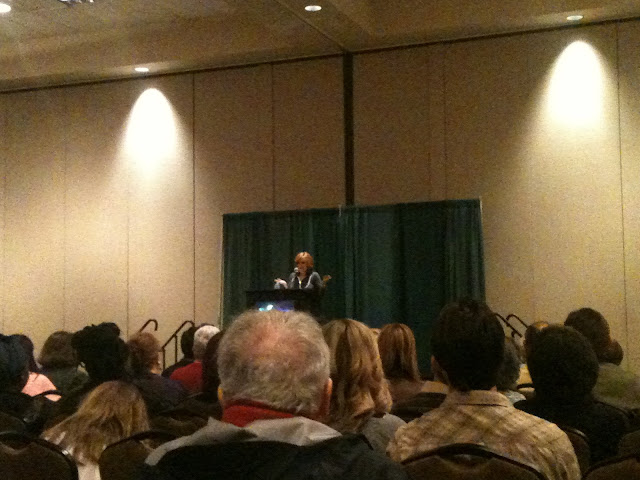 Despite Carol and Scott looking like indistinguishable blobs, I promise that really is them.

Drew and I then met up with my mom 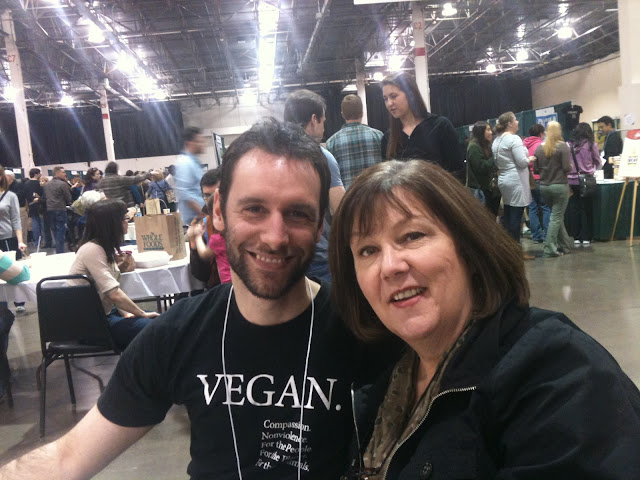 and these nachos (which were nothing short of heavenly) happened: 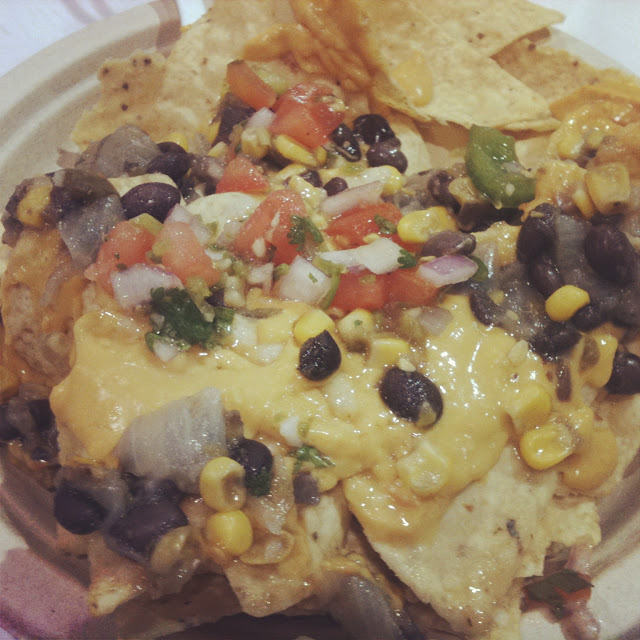 As with previous VegFests, the day was absolutely excellent!  It's so wonderful to see thousands of people (quite literally) interested in a diet that not only promotes health, but helps stop animal cruelty.  I saw many familiar faces, and as I mentioned before, the food was incredible.  I definitely left with a happy heart and full belly. 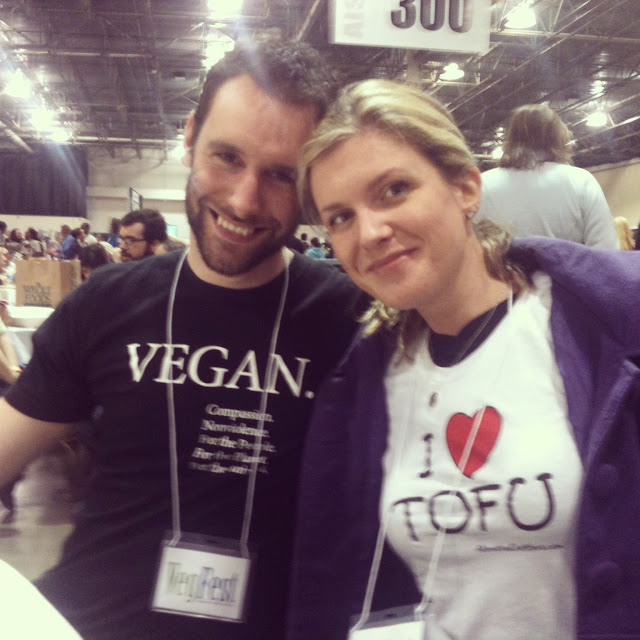 Posted by Kate Brindle at 6:14 PM No comments:

So...I'm moving.  Again.  Despite me telling myself that I won't pack up everything I own and attempt to squeeze it into my Honda Civic every couple of years, I'm doing just that (although this time I had the assistance of a U-Haul truck).  I'll be taking the summer to do a ton of shows (with trips to Las Vegas, Los Angeles, Alaska, Norway and Denmark thrown in for good measure) and be a nomad before I start law school in August.  As I've mentioned before, I'll be attending Michigan State University, so at the end of the summer, I'll make the move up to East Lansing. 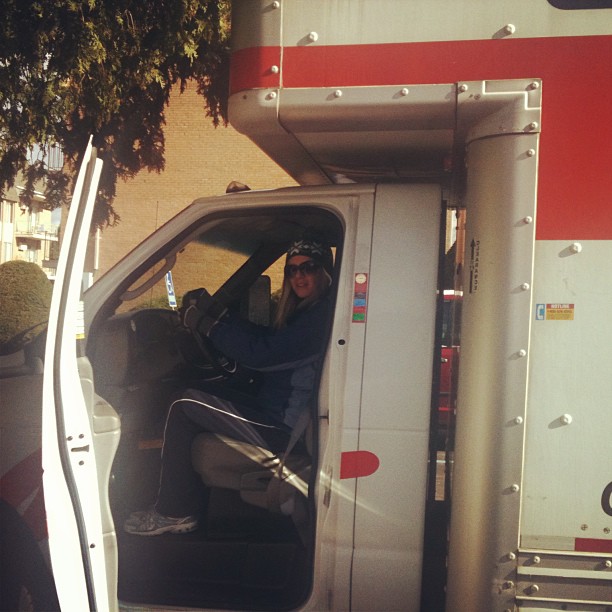 Moving when it's thirty-something degrees and you have to dress like you're in Siberia = no fun.

I also realized this: nobody in the history of ever has been happy at the U-Haul store.  Seriously, everyone in there looks like they just had to remove their grandmother from life support.

And they try to charge you for EVERYTHING.  When I returned the truck, the manager looked legitimately disappointed that I hadn't gone over my mileage or returned it with one-seventeenth less air pressure.

Oh, and a  little tip from me to you: spend the extra fourteen bucks and spring for the insurance coverage. If you're anything like me, everything will go smoothly throughout the day until you're gassing it up 300 yards from the return location and a giant cement pole jumps out at you. 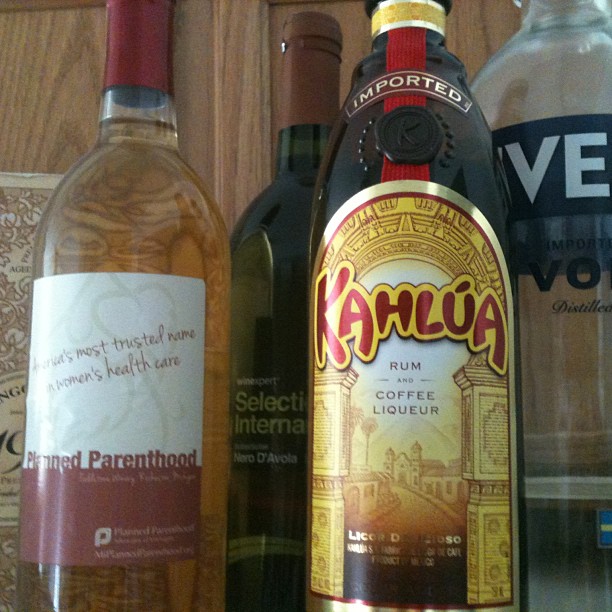 Best way to move alcohol? Drink it all so you don't have to pack it! Note: this may be exactly why the giant pole jumped out at me.

I also learned a lot about myself during this move:

-Apparently, having twenty-three plants and five bottles of conditioner is a necessity, but a dresser isn't one (I got rid of mine just because I was too lazy to pick it up and haul it down several flights of stairs).

-I have no idea what people mean when they say "lift with your legs."  Everything hurts, my back and legs included.

-I just might be a hoarder, especially when it comes to gum wrappers.

-I don't want to do this again for three years.

-But, I most certainly will.
Posted by Kate Brindle at 11:26 AM No comments:

Wearing a race shirt for Boston on my 10 mile run today. Still feeling so very shocked and sad. 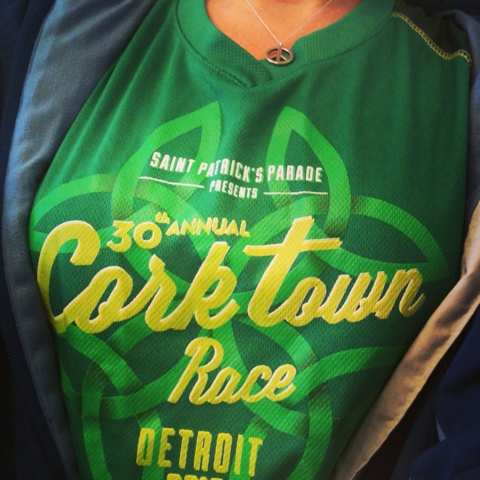 Posted by Kate Brindle at 1:17 PM No comments:

I played in Rhode Island this weekend. I love it here, mostly because I can't get enough of the accents. Everyone sounds like New Kids on the Block; it's amazing! PS Is it weird that I asked the Taco Bell cashier to repeat the price of my order just so I could hear him say $4.42 twice? He's just lucky that I didn't ask him to bust out a rendition of "Please Don't Go Girl." 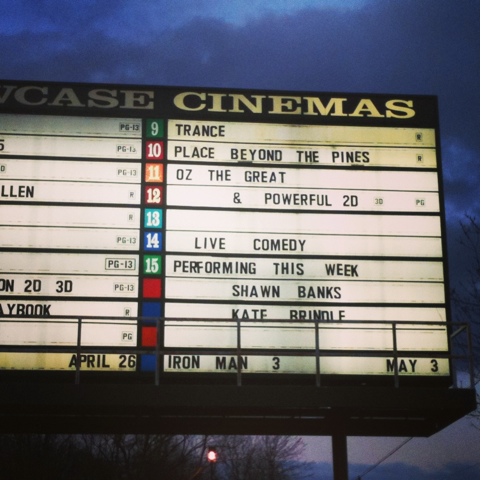 Posted by Kate Brindle at 2:16 PM No comments:

This past weekend, I headed to Jeremiah Bullfrogs in Topeka, Kansas.  Bullfrogs has quickly become one of my favorite places to perform.  The staff is nice, the venue is a cute little theater and the crowds are fun.  Plus, they have giant beer, which I always love.

I had the pleasure of working with the very funny Tim Pulnik. 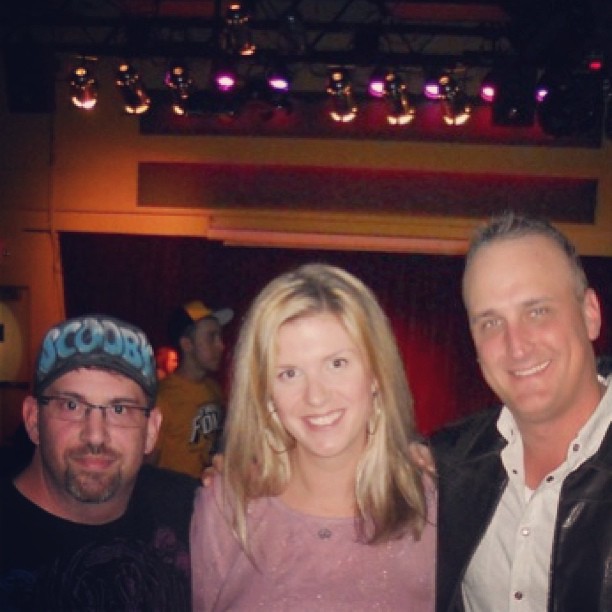 That's us with DJ Scobby, who came on after the show.

During the day, I was supposed to fill my time with training for my half marathon (it's only 3 weeks away - eek!), but instead, I went shopping (something I rarely do, as evidenced by my repetitive, wardrobe that significantly lacks style) and to a Japanese/Chinese buffet (all-you-can-eat vegan sushi rolls?  Um, yes, please.).  I also went to see the Equality House.  If you're not familiar with the Equality House (and its famous neighbor), you can learn more here.

I think it's so important to show Fred Phelps that his message of hate will not be tolerated.  I was quite pleased to learn that the Equality House has turned into a bit of a tourist destination.  When I pulled up, there was already a group of women taking pictures.  They were really nice and happily indulged my picture-taking obsession.

To support the Equality House, you can do so here. 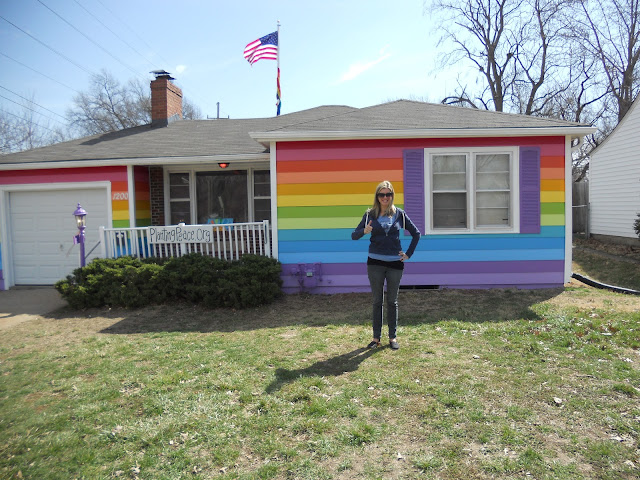 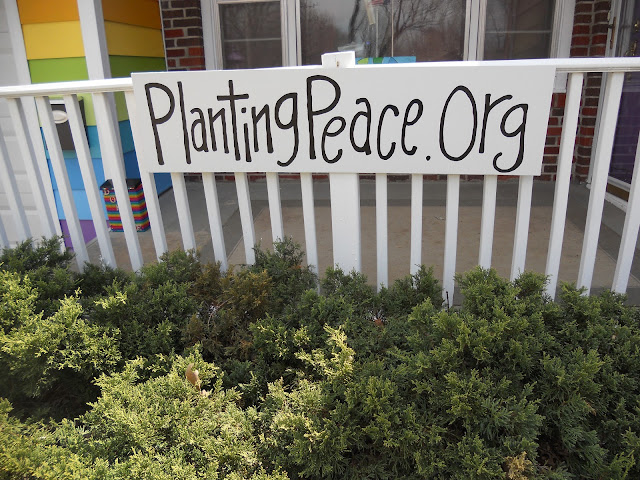 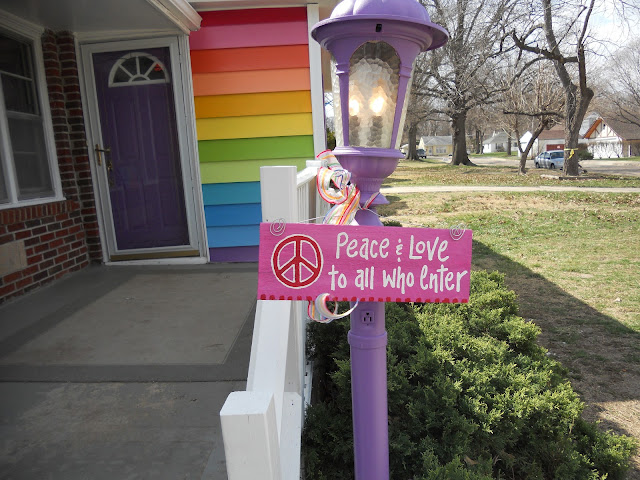 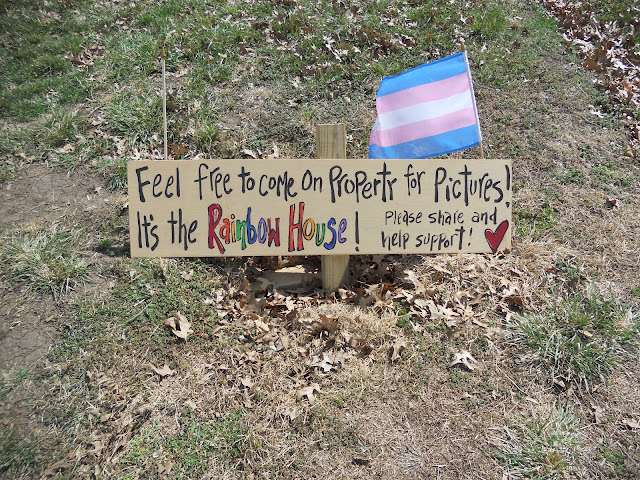 Posted by Kate Brindle at 8:25 AM No comments: