Before I worked full-time as a stand-up comic, I used to be employed in the Campaigns department of People for the Ethical Treatment of Animals (PETA). I used to travel extensively with PETA, and I've often missed my time with them. So I was delighted when I got the opportunity to volunteer with their Animal Liberation Project at the University of Milwaukee Wisconsin. I was excited about sharing information about animal rights with the students there, and I was also quite psyched to eat at the veg-friendly restaurants in Milwaukee.

If you're unfamiliar with the Animal Liberation Project, you can check it out here. In short, it's an exhibit that looks back at history to show how we justified the abuse of humans in the past and continue to justify cruelty to animals today.

Drew (who used to work at PETA as well) and I made the six-hour trek to Milwaukee, where we were greeted by the co-president of the University of Wisconsin Milwaukee animal rights/vegan student group, Amy. She couldn't have been sweeter and gave us both gifts and hugs upon meeting us. 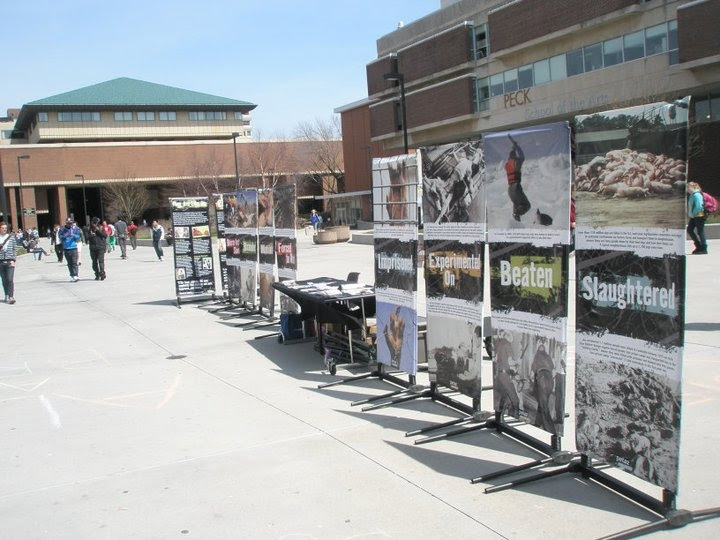 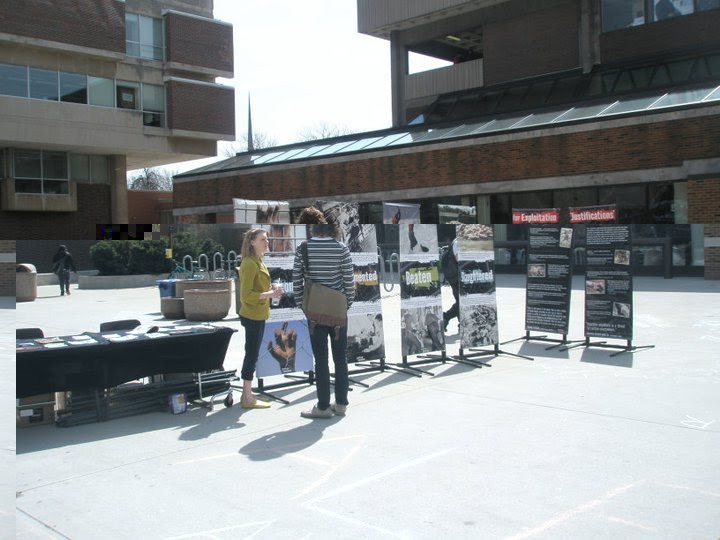 For the following three days, we then staffed the display (pictured above) and talked to campus community members about the connections between human and animal oppression and suffering. We met a lot of receptive folks, and I even ran into a former PETA intern (Arizona) who I went on the road with two years ago. As I was handing out leaflets, I heard someone shouting my last name really loudly. I looked up, and it was Arizona! I was shocked seeing as she didn't go to UWM when I knew her. But, she explained that she had recently transferred there. It was a pleasant surprise to see her, and it was great to catch up! 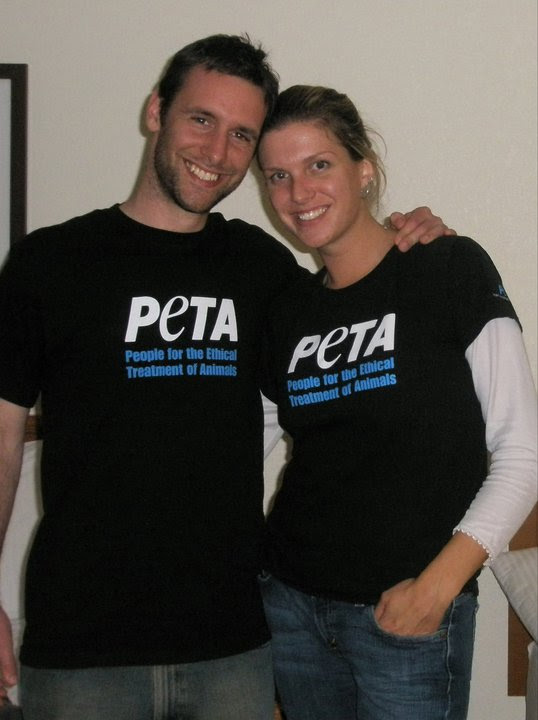 Our uniform all week.

After a busy first day in which we acquired sunburns, Drew and I headed to Beans and Barley where we had the most delicious sweet potato/black bean burritos and some locally brewed beer. 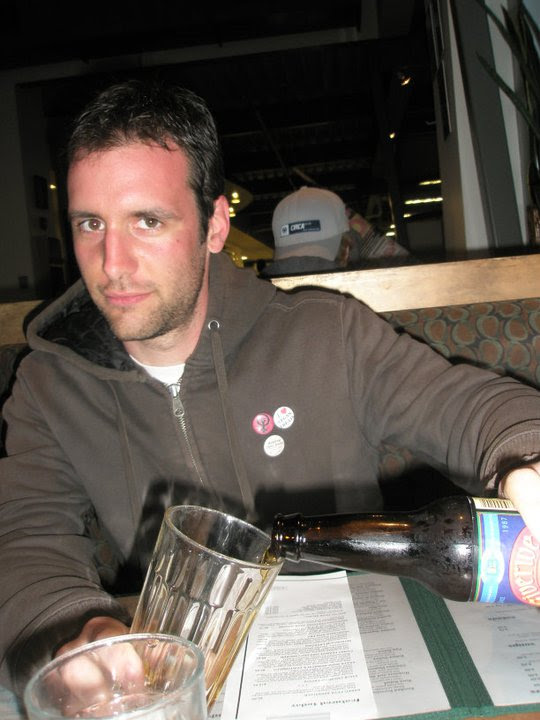 The following day, the Wisconsin weather dropped at least thirty degrees and decided to start raining (grr!). Only in the Midwest can one get a sunburn one day and frostbite the next. We braved the cold and handed out leaflets as we attempted to stay warm in the frigid air. In the morning, Amy showed up with not only warm tea for us, but also vegan candy bars, scarves and hats. Could she be more awesome? I think not.

This day also marked my favorite person-on-the-street story. When you're leafleting, you never know who you're going to speak with. A lot of times people are very supportive. Sometimes they just want to take your information and not be spoken to. And other times, they want to tell you their life stories (complete with multiple quirky facts about themselves).

I certainly experienced all three during my time with the ALP. But, the story that made me crack up the most is as follows:

The ALP features pictures of humans and cows being branded to show the inherent cruelty in burning another being's skin simply to show ownership over her/him. Well, out of the blue, this woman walked up to me and flatly stated, "I was branded on my forehead. And I have a third nipple."

So I paused, thinking she was going to crack a smile or indicate that she was making some sort of joke.

Nope. She just stared at me until I said something. It was like we were at a stalemate, both waiting for the other to speak.

Frankly, I have no idea how to respond to someone disclosing that they not only have a branding, but a third nipple. So I simply said, "that's nice. Um, all of the literature on the table is free, so please take some if you'd like. And if you have any questions, just let me know."

She paused again, and then actually took a pamphlet.

In the evening, we warmed our bodies (and souls) by getting a fix of vegan junk food at Comet Cafe. 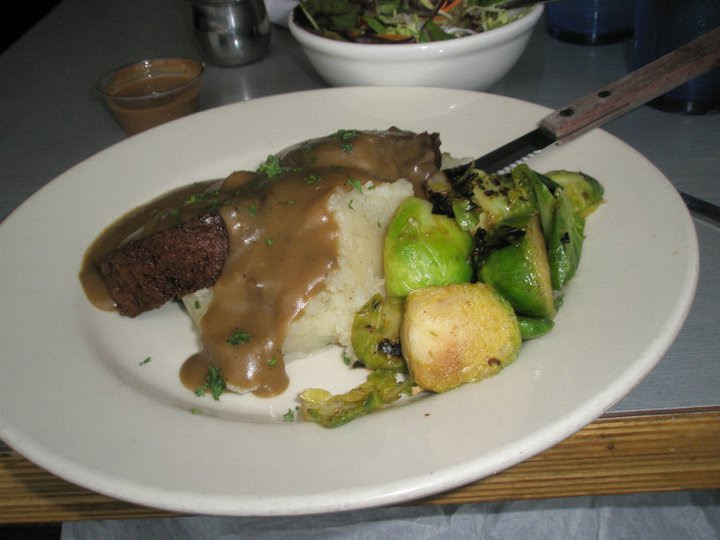 My yumlicious vegan meatloaf from Comet. 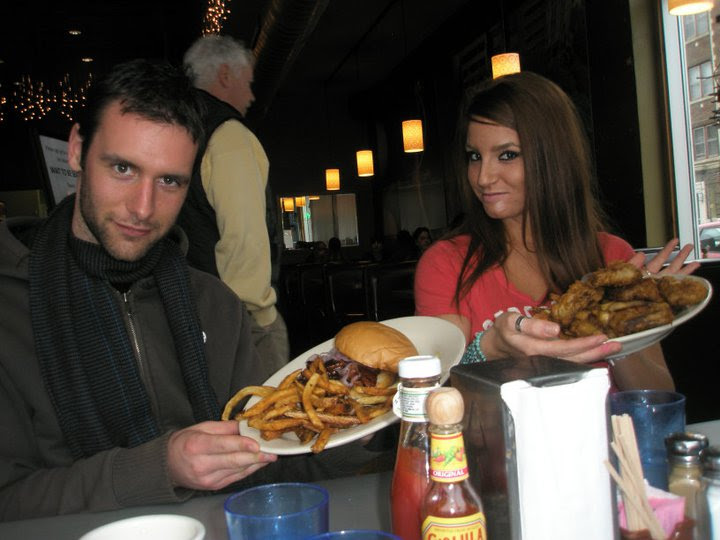 Arizona and Drew displaying the awesome food there. 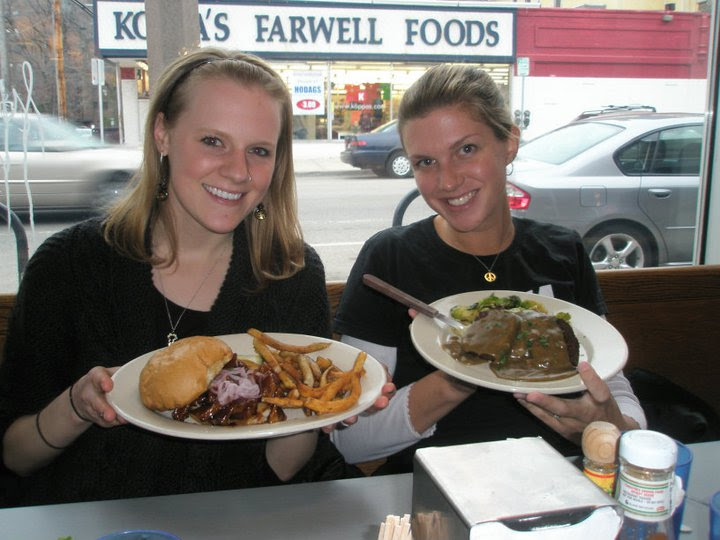 Amy and me with more awesomeness. 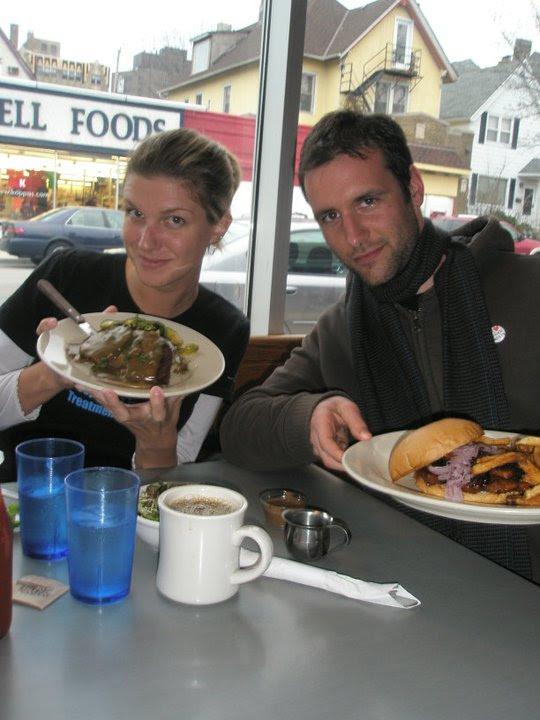 And even more awesomeness. 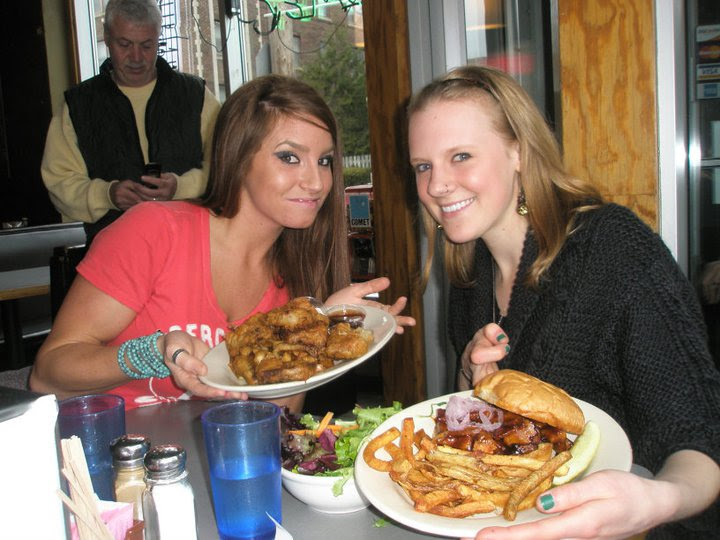 On Friday, we said goodbye to the cold weather and moved the display inside. I think we reached even more people as folks didn't have to risk catching a cold in order to engage in conversations with us. I left Milwaukee feeling really hopeful and inspired. The work the UWM student group does is incredible, and we talked to so many supportive people and folks who want to make changes in their lives to help animals. Plus, Amy (who plans to open a vegan bakery after graduation) filled Drew and me up with the most delightful vegan baked goods for the road. So my heart and belly definitely felt full!
Posted by Kate Brindle at 4:14 PM No comments: