Halloween is my favorite holiday of the year. It's a great time to get together with friends, eat candy…and look like a total skank. That's the trifecta of fun, right there. In honor of the holiday, I have put together a list of my favorite ten songs:

1. "Freaks Come Out at Night" by Whodini – Not only is this song quite danceable, but the lead singer's leather cowboy hat (and open leather shirt ensemble) is sure to send chills down anyone's spine.

2. "Nightmare on My Street" by DJ Jazzy Jeff and the Fresh Prince – Who doesn't like a circa-1980's hip hop beat thrown over some scary horror movie theme music?

3. "Tubular Bells Pt. 1" by Mike Oldfield – Honestly, I had no idea this song was even in The Exorcist. I just remember enjoying it on my Pure Moods complication CD, which was in constant rotation during my first year of college. So, I've included it for nostalgia purposes. Lucky for you readers, I've left all of the other music I listened to in the late 90's off the list.

4. "Thriller" by Michael Jackson – Alas, what Halloween list would be complete without this little gem?

5. "Pour Some Sugar on Me" by Def Leppard – Okay, this one might be a bit of a stretch. But, I figured nearly everyone eats candy on Halloween (my apologies to the diabetics of the world). Candy contains sugar, hence the song.

6. "Somebody's Watching Me" by Rockwell – Never has getting stalked sounded so good.

7. "Spiderwebs" by No Doubt – If you jump around enough while listening to this tune, you might even get abs like those belonging to Gwen Stefani.

8. "The Time Warp" from The Rocky Horror Picture Show – I dare you not to dance to this one (or, have an unexplainable urge to wear black garters and fishnet stockings)!

9. "Monster Mash" by Bobby "Boris" Picket – Of course I had to include this classic. I'm still partial to the original, but since its first recording, several bands have covered it, including the Smashing Pumpkins and the Misfits.

10. "Ghostbusters" by Ray Parker, Jr. – This song still makes me long to have a proton pack.
Posted by Kate Brindle at 5:29 AM 1 comment: 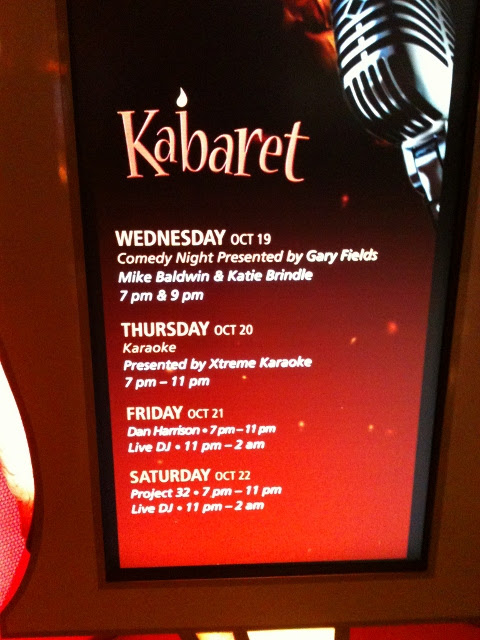 Fun, but uneventful shows last week, which is exactly how I like it seeing as "eventful" usually means a tale of an audience member hurling something on stage or throwing up in their seat. On Wednesday, I worked at the Firekeepers Casino in Battle Creek, Michigan. Mike Baldwin, who I think is absolutely hilarious, was the headliner. 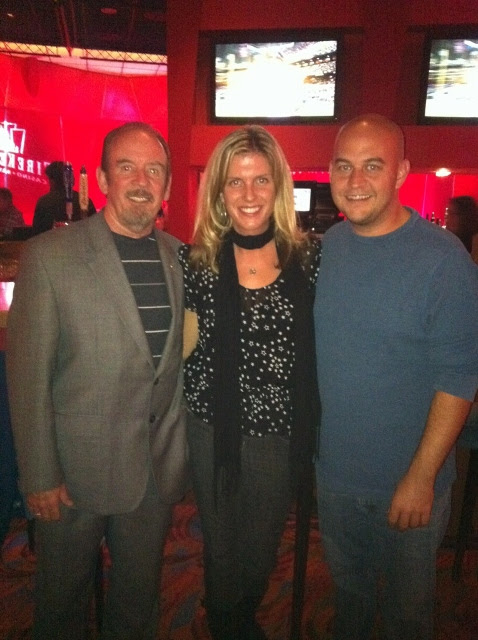 That's me, Mike and Gary Fields, who runs the room.

It was nice to catch up with them both, since I hadn't seen Gary in a year, and the last time I saw Mike was at Laugh Detroit in March. In fact, my last memory with him was talking and shoveling hummus into our faces while the cops showed up at the after-party.

I'll let it be a mystery whether anyone got arrested and hauled off, bare-chested, television COPS-style.

But, I will say that if you're thinking of applying to the Laugh Detroit festival (plug alert!), you should. In what other cities do cops come bust up hummus-eating chatfests? 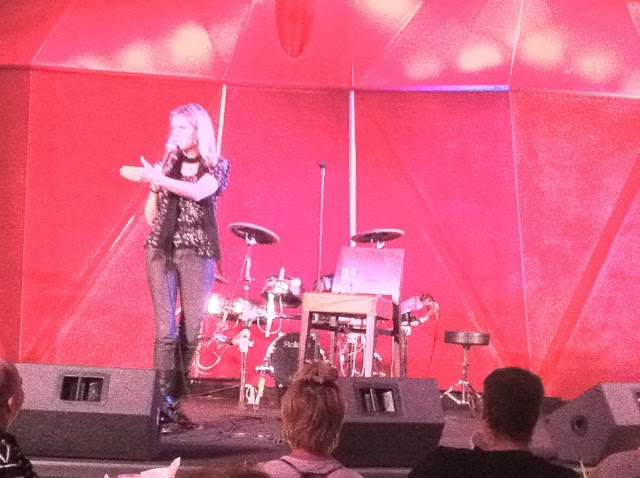 After the shows, I managed to actually pocket my money and stay the heck off the slot machines. Sorry, Firekeepers, but I'm not helping you build your new hotel...at least not this time anyway. I'm sure I'll be contributing to the chandeliers in the lobby the next time I decide to play Black Jack though.

On Saturday, I played at the Treehouse Lounge in Bloomington, Illinois. I was in for another treat with the headliner because at this show I worked with Mike Stanley. Not only is he mega-funny and super nice, but he's originally from Michigan and writes like a fiend! I always get so inspired by people who are constantly creating and trying new material.

Unfortunately, we had a pretty light crowd. But, the people who were at the show were really awesome. They laughed like crazy and even tagged jokes when appropriate. Plus, I sold two bumper stickers, which translates to selling to 25% of the crowd.

If only I could have those odds at shows where there are 3,000 people in the crowd.
Posted by Kate Brindle at 5:08 AM No comments: 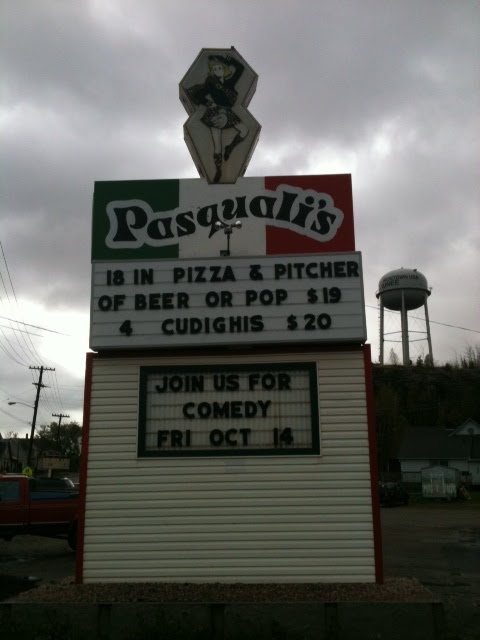 This weekend, I traveled to the Upper Peninsula of Michigan and Wisconsin to perform. It was quite the adventure getting up there. I purposely planned my trip so I could arrive at the hotel with a couple hours to spare before my show. Normally when I do out-of-town shows, I like to allow myself time to check out the town, go over my notes and, of course, take advantage of the hotel's free cable.

I had planned to cross the Mackinac Bridge from the lower peninsula to the upper at around 2 pm. Unfortunately, right before I was about to cross, several police officers made everyone exit the highway and told us that they were closing the bridge.

I tried to remain calm.

"How long will it be closed for?" I asked.

"Oh, at least four hours," was his response.

I immediately began to have a slight heart attack as four hours meant I would cross at 6 pm, and I still had nearly four more hours of driving to reach my destination.

But, instead, I used the time to pull into a Burger King parking lot, steal their wifi and get some much needed work done (namely: checking various facebook status updates).

While in the parking lot, I heard stories being tossed around that the closure was due to a huge accident where a semi was actually hanging over the bridge.

I never found out exactly what happened, but they finally opened the bridge right before 6 pm. I then drove like a bat out of hell to the gig, and I quickly changed in a Taco Bell parking lot. Modesty be damned when the masses need to be entertained (and when I say masses, I mean 50 or so people)!

I arrived at the show (at Pasquali's in Neguanee, Michigan) with ten minutes to spare. Phew! I tried to calm my nerves and give my stomach a pep talk so she wouldn't continue to do flip-flops (thinking I was going to miss the show had me quite worked up).

The show was a lot of fun (I worked with headliner Mike Mercury, who is hilarious!), and we had a huge turn-out! After the show, I sold quite a few bumper stickers, and enjoyed some vegan pizza and beer with audience members (a big thank you to Clark, the owner, and his family for making me food and taking such good care of me).

Since I was in such a rush pre-show, I wasn't able to check into the hotel until after the show. Well, by that time, the hotel owners had gone home so I wasn't able to do so. Instead, I got to stay with Clark's parents, who were so very kind and hospitable to offer their home to me. I got to stay in the "grandkid room" (complete with stuffed animals and Dallas Cowboy sheets), which made me miss staying with my own grandmother.

On Saturday, I headed to Sheboygan Falls, Wisconsin. I had some time to kill during the day, so I did some fun, touristy things like taking a nap in the Walmart parking lot and charging my iphone in the Kwik Trip gas station. The outlet was conveniently located near the ATM. You truly haven't lived until you've spent several hours smelling the liquor on the breath of random strangers who are withdrawing money to buy more alcohol.

The show was a lot of fun. The audience was nice, and they indulged my jokes about Sweetest Day (which I only bust out once per year). Unfortunately, Mike Mercury got sick and wasn't able to do the show. But, instead, I got the chance to work with my friend, Mike Marvell. So it was nice to catch up with him.

Looksy what I found when I arrived at the gig: 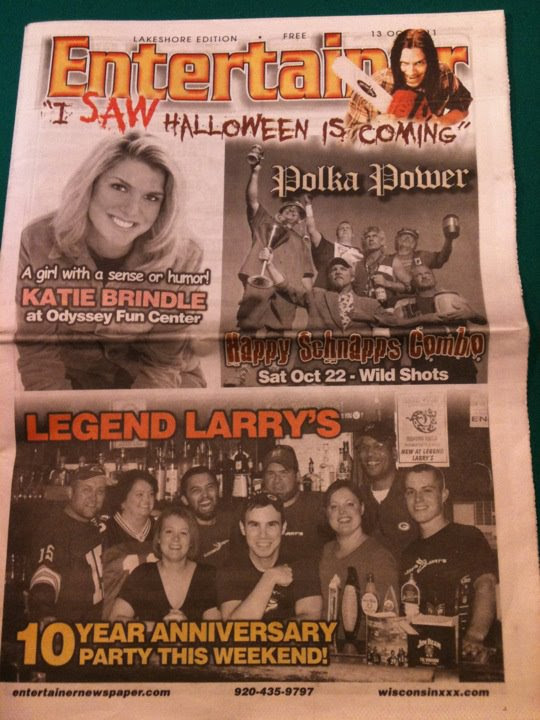 That's right, I graced the cover of the Lakeshore Entertainer. The cover is kind of like the hidden pictures game in Highlights magazine, only instead of trying to spot a teacup or a ring, you have to spot what's wrong. For starters, it says sense or humor. Um...me thinks they might need to fire their proofreader(if they even have one).

There are a couple other things that crack me up, namely that being a girl with a sense of humor (er, make that sense or humor) is so rare that it's cover story worthy.

But, hey, I'm still pretty excited that I got to share top billing with a polka act. Only in Wisconsin.
Posted by Kate Brindle at 8:33 PM No comments:

Ode to my various neighbors - in haiku form

TV, music, talk
I hear everything you do
Oh, I miss silence

Really loud music
I like Lady GaGa, too
Not at 1 a.m.

Bulls in china shop
is what you sound like daily
Please lose some weight now
Posted by Kate Brindle at 6:47 PM No comments: