What a fun weekend in Minnesota! Unlike the east coast, which got pummeled with snow, the upper Midwest got nada, which made for a great drive there and back. It's always nice when the most eventful part of a drive is discovering a gas station where you've stopped for fuel also sells chocolate milk (shout out to the Kwik Trip!).

I performed at Dangerfield's with my good buddy, Steve Sabo, for the weekend. Another road friend of mine (and not to mention, super funny dude) Shannon Thompson stopped by on Friday night. It was great to see him (as it had been years) and meet his wife, Kim.

Unfortunately, we didn't get a picture of the four of us, but I may or may not have done this face at least 20 times. 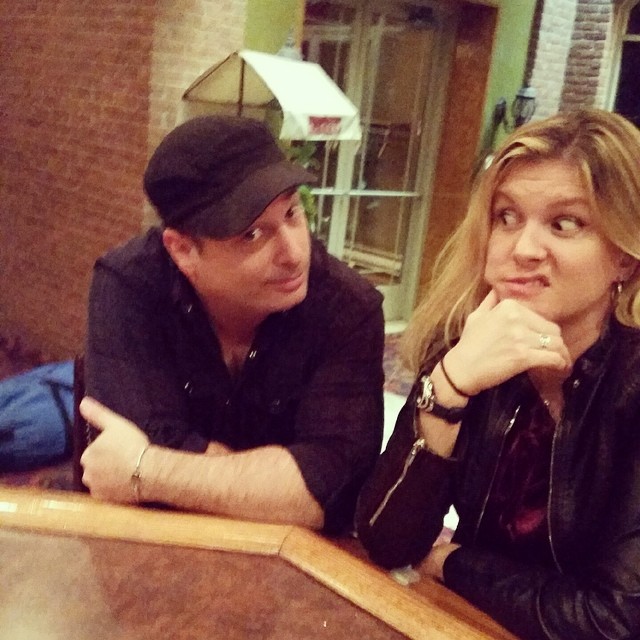 Back at the hotel:
The hotel was memorable for another reason, too. Friday night marked a first for me: I called in my first noise complaint on other guests. Yep, I'm officially old. I guess my thirty-something year-old self can no longer handle screaming teenagers repeatedly proclaiming "they call me the jack hammer" at 85 decibel levels at 4 a.m.

Anyway, this entry is short and sweet, but that's kind of how my trip was, so we'll leave it at that.
Posted by Kate Brindle at 9:15 PM No comments:

Made it through my last first day! 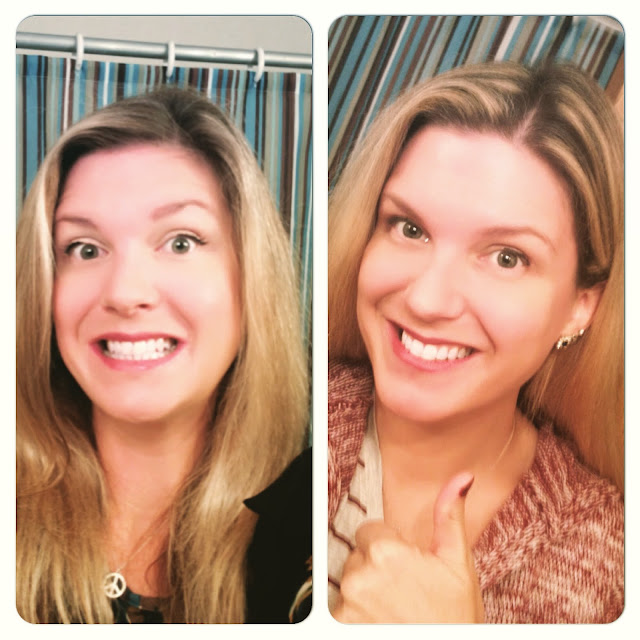 On the right: first day of my first semester of law school.

20 stress-gained pounds and countless wrinkles later, on the right: first day of my last semester of law school.
Still smiling because I'm almost done.
Posted by Kate Brindle at 6:45 PM No comments:

On Wednesday, I got up bright and early to drive 13 hours to Florence, South Carolina. People will occasionally ask me how I can do such a long drive and then perform at night without being exhausted. My answer: the promise of getting out of Michigan's 10 degree weather is pretty good motivation.

After last week's debacle, this drive was completely painless and uneventful!

I didn't get any pictures of my show at the Southern Hops Brewing Company, but it was a good time. I even met an audience member who had been to Peru a couple months ago, and we traveled the exact same itinerary! So, we chatted about tuk-tuks and "the road of death" quite a bit.

On Thursday, I made my way over to Myrtle Beach for the weekend. 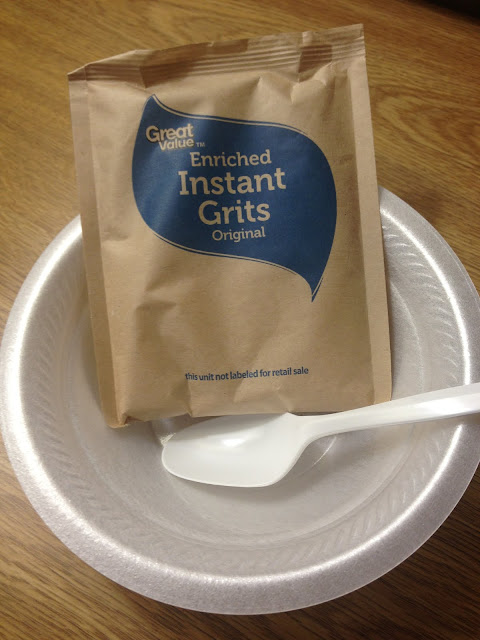 You know you're in the South when this is the continental breakfast.

But first, I stopped by the Conway public library to get some homework done. 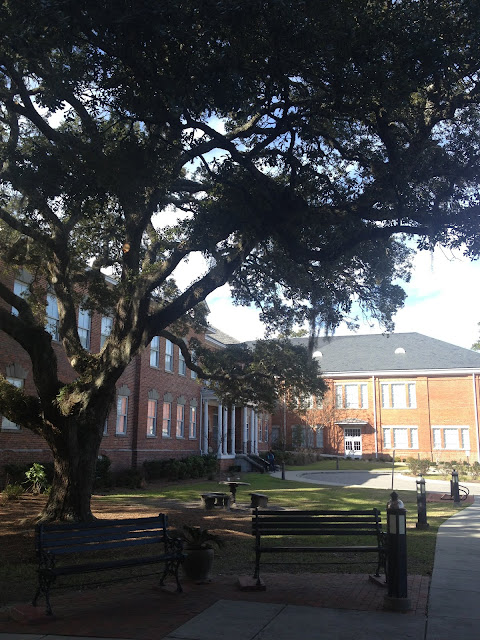 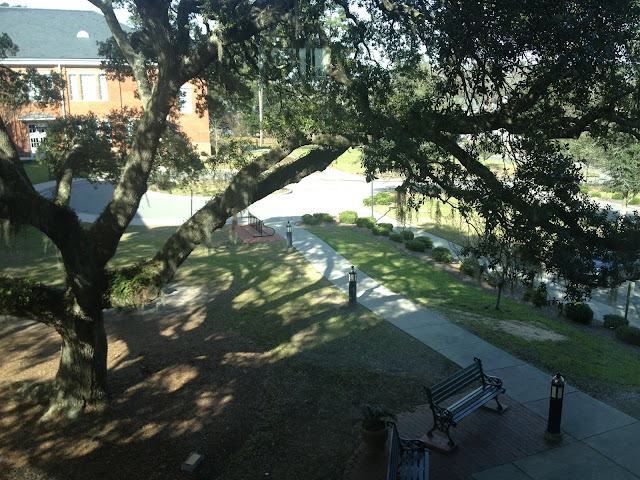 Not a bad view for brief-writing. I always have a blast when I work the Carolina Comedy Club! The staff is so much fun; although much to my disappointment, I had too much homework to go out with them after the shows like I usually do.

The weather was rainy and in the 50s, but that did not stop me from wearing flip-flops the entire week. As you can imagine, I was stared at quite a bit by the locals.

This shows were fun, and I had a really good time working and hanging out with Todd Johnson (along with all the other comics who swung by). 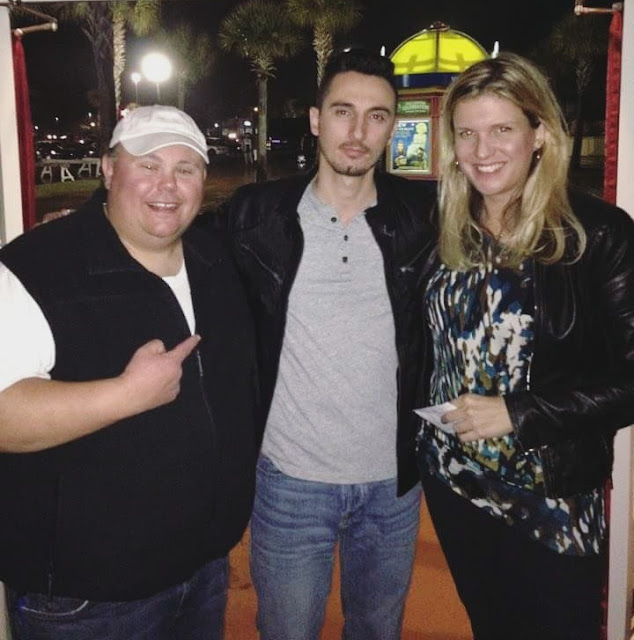 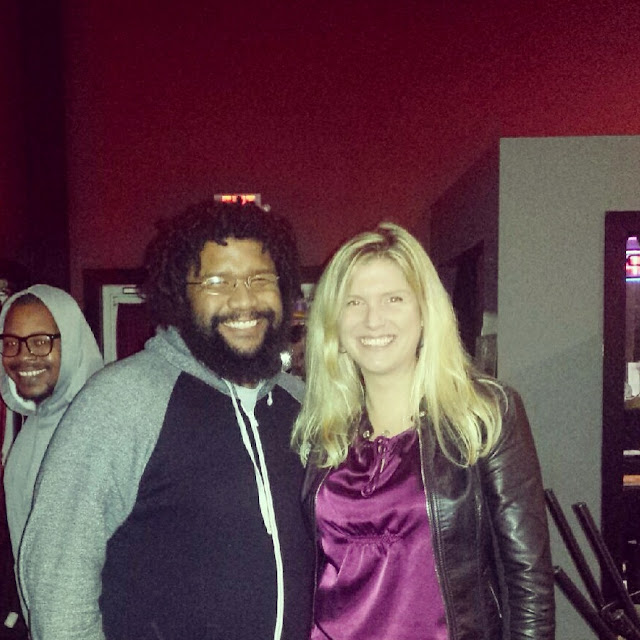 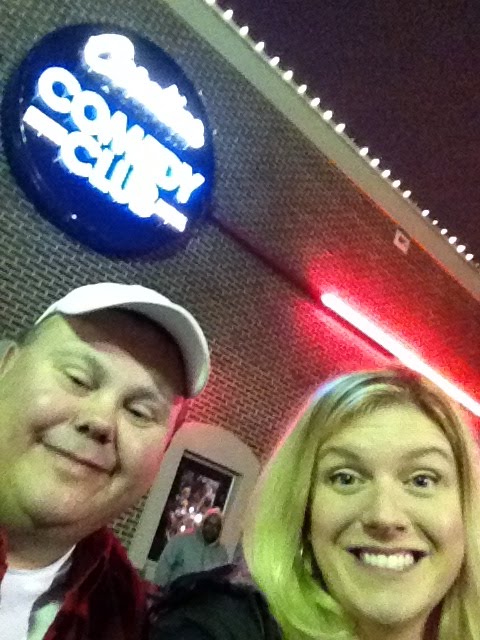 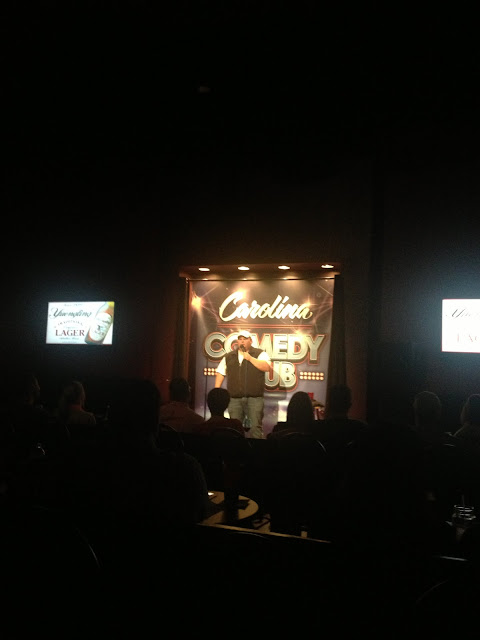 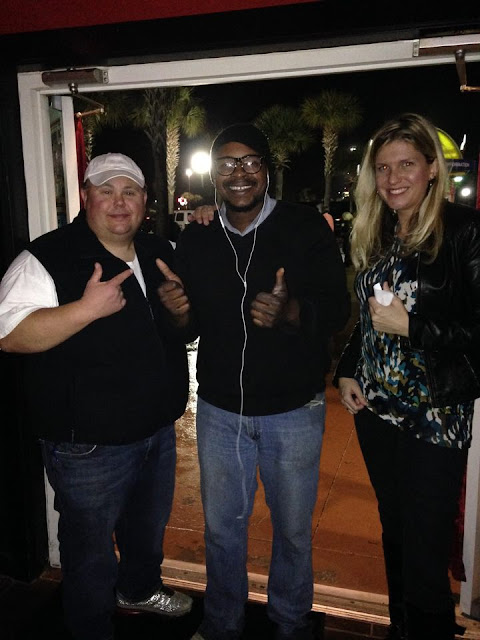 This weekend also marked a first for me. Right as I was finishing up my set at the Saturday late show, a guy, who wasn't an audience member, walked into the club, asked for directions to a restaurant, then proceeded to walk on stage during my set and give me $20. It was the easiest and weirdest money I've ever made in my life.

The drive home was long, but I busied myself by binge-watching Making a Murderer, calling everyone I know who has seen it, and picking my jaw up off the floor. It was so shocking and outrageous. But watching the lawyers from the Innocence Project (and being inspired by their work) was good motivation to start my classes again on Monday.
Posted by Kate Brindle at 7:00 PM No comments:

So this is happening...

As a graduation (fingers crossed) present to myself, I bought myself a ticket to Iceland. Ever since visiting in 2014, I had vowed to return.

And as a form of torture gift to my body, I decided to run there, too. 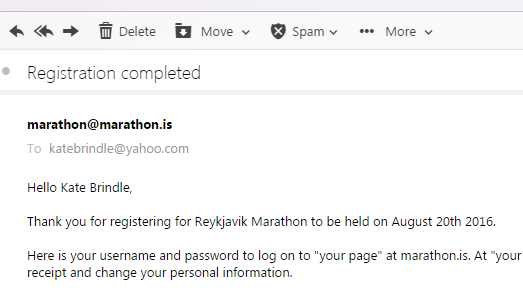 I guess it's time to put down the Swedish Fish and actually get off my behind.
Posted by Kate Brindle at 5:56 AM No comments:

Ringing in the new year with...mildew and flat tires

After celebrating Christmas, spending a day at the Board Art Museum, and stuffing my face at Mongolian BBQ (among other places), I made my way to Minnesota to perform for New Year's Eve.
I was so excited that Dan could join me for the trip. We decided to turn my run into a little vacation.

The first stop was Rockford, Illinois. We were basically just planning to spend the night there to break up the drive.

However, on the way there, on I-94, I noticed three or four cars pulled over to the shoulder, along with two police cars. Right as I was looking at them, a semi-truck cut into my lane as to avoid the cars on the shoulder. Being quite startled, I completely missed the reason that the cars were pulled over: the biggest pothole I had ever seen in my life.

And, yes, I ended up driving directly through it.

A few miles later, my tire pressure light came on. We pulled over, and to my horror, I saw a really bent up rim and a quickly deflating front tire.

Not off to a good start.

Luckily, I have AAA, so I called them, and I completely freaked out and cried about not being able to replace the tire since it was late at night and I knew I wouldn't make it to Minnesota on the spare calmly assessed the situation.

I had planned on waiting for at least an hour, but I was pleasantly surprised when after five minutes, a biker-looking Santa Claus-type in a an old Lumina mini-van informed us he was there from AAA.

He suggested attempting to pound the rim back into place by using a giant mallet.

Figuring I had nothing to lose, I gave him the go ahead.

After looking like he was beating the living day lights out of my Honda, he finally got the rim looking circular again, and we were on our way.

Much to my delight, the tire made it all the way to Rockford, where we spent the night. And, it even managed to make it to Minnesota, too.

Once we made it to Andover, Minnesota, I got ready for my show and headed over to the Courtyards, where I was to perform in front of 350 people.

I opened for Michael Thorne, and we had an absolute blast! Not only was the crowd cool, but I got to duet on "Friends in Low Places" during the karaoke portion of the show, and I also had champagne at midnight.

Some pictures from the evening: 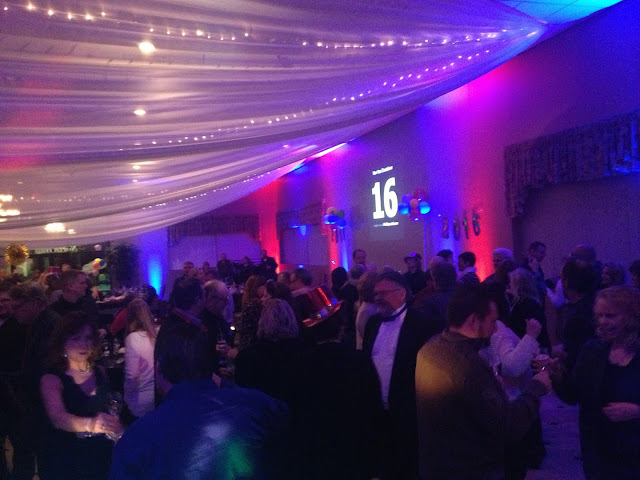 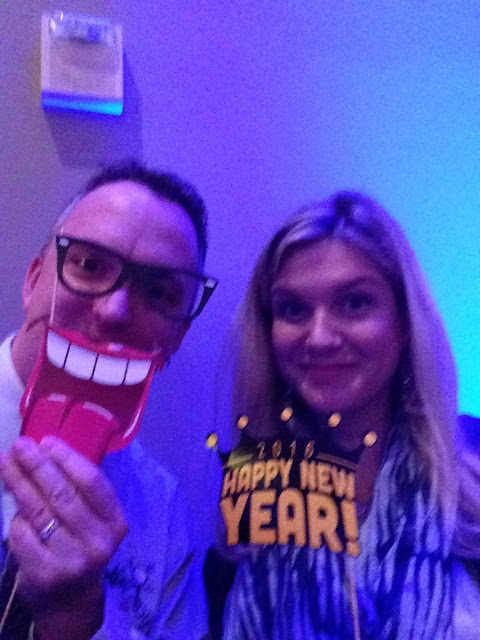 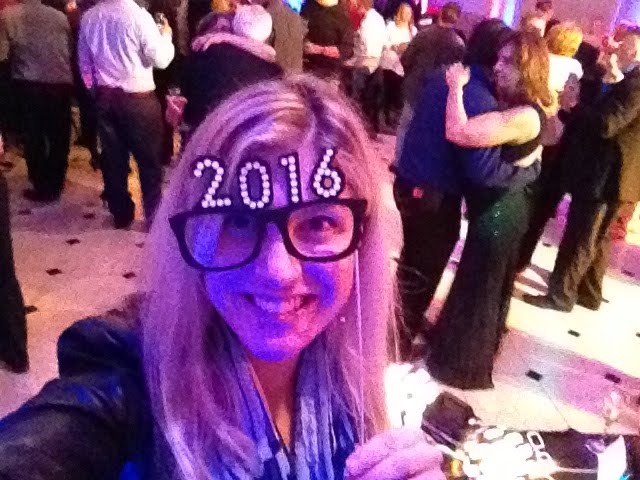 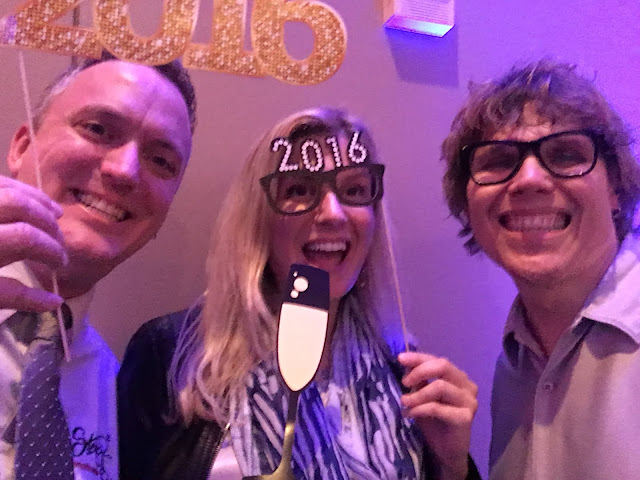 The next day, we headed to the Mall of America. One of my semi-New Year's Resolutions (I say "semi" because I never truly commit to my resolutions, and I guess I'm okay with that at this point) was to be more adventurous, so after bopping around in some stores, we set our sights on the thrill rides.

But, first, I would need beer. So, we headed to the Hard Rock Cafe where we sipped local beers, chatted up the bartenders, and tried to guess various people's ages. Other than someone guessing that I was 40 (what the what what ?!?!?!?!), it was a fun game. 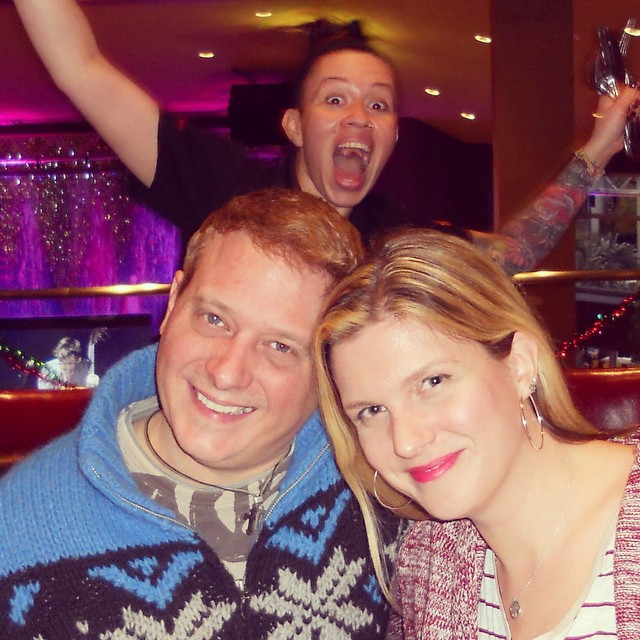 Then, we went on the mall's roller coasters and spinny rides (their technical name, I'm sure).
After riding, I wasn't quite sure if I wanted to throw up because of the rides or the beer, but we figured we would check into our hotel in either case.

We went to a place I found on hotwire, and, holy wow, was it ever disgusting.

When we pulled up, the parking lot was not plowed and was covered in snow. We were handed two gross looking towels upon check-in. P.S. If the front desk has to give you your towels, that is never a good sign, and you should run. Run far, far away.

When we got to our room, it smelled so bad of mildew that we almost had to open the windows (we would have had it not been 10 degrees outside). The heating was broken so there was a space heater in the room. We ordered a king bed, but were given two twins pushed together instead. The sheets contained cigarette burns. The towel rack was also broken as was the deadbolt.

The shower's tub was filled with hair, and it was so disgusting that I didn’t even take a shower in it because I was so terrified of germs. The bathroom floor looked like it hadn’t been cleaned in months, and there were pieces of dirt on it. The remote control did not work, and the tv kept going in and out.
As if this myriad of reasons was not enough to be completely horrified, the owner of the hotel knocked on our door at 3 am for no good reason. When we asked why, he simply said "I was just checking."

But, at the point the hotel offers "check on" service, I'm pretty convinced there are people regularly dying of meth overdoses. That's sad and all, but I would kind of prefer a non meth-ridden place when I'm on vacation.

We woke up at 6 am, got the heck out of there, and then headed to Plateville, Wisconsin, where I was to perform at the Arthur House that night.

We had some time to kill, which we did at some antique stores. Dan even got to try a local favorite, Taco John's. Ah, fine cuisine! But, hey, it was cheap, and unlike Taco Bell, Taco John's has its own salsa bar.

The show at the Arthur House was fun, and I even got a $20 tip. The drive home was much less eventful, and save for some icy snow in western Michigan, our drive was pretty pain-free.

Happy 2016! Here's hoping it's full of properly inflated tires!
Posted by Kate Brindle at 11:59 AM No comments: