Note to self: if you show up in a town where lots of people look like they're on meth, lots of people are probably on meth. And they probably want to steal your purse and break into your car to purchase said meth.

That's exactly what happened to me this past weekend in Montana.

After the show, while my buddy and headliner, Steve Sabo, was still on stage, I went to set up Steve's CDs and t-shirts on the merch table. Seeing as I was selling my ever-so-classy bumper stickers, I also put those on the table and set my purse right next to them.

I turned my head for what was probably ten seconds while Steve was finishing up his closing bit. In that time, a guy swooped in, pretended to look at the t-shirts, grabbed my purse and walked away with it.

He not only got the purse, but he also got my car keys and used them to steal a ton of things from my car. But, he didn't steal everything from my car. Nope, just random crap like a cooler full of Red Bull, a snuggie, and my car owner's manual. Apparently, he was really thirsty, likes robes with sleeves, and had a burning desire to know how many miles a Honda Civic can go before needing its oil changed.

The other issue was, after he got through taking all of my credit cards, IDs, money, and other useful things, he kept my keys. So, I couldn't even get into my car. And I was scared he was going to come back and steal it.

So, after filing the police report, I had to have my car towed across town to essentially hide it from this guy. And Steve and I had to think how the heck we were going to get to Idaho the next day in a car we couldn't get into.

While we were figuring this out, we got a call from the police saying they actually caught the guy. Apparently, he hit four other cars in the parking lot (he used a rock to break their windows), stole a cell phone from one of the vehicles, which was then tracked to his residence. Doh!

Up until this point, I thought he was a pretty savvy criminal (and gutsy, too, given that he actually had the audacity to buy a drink from the bar where he just stole a ton of stuff...on a stolen credit card, of course) seeing as he stole my purse when it was within feet of me. But, I'm pretty sure theft 101 dictates you're not supposed to take anything that's traceable. Apparently, dude doesn't watch enough Dateline.

This is where I feel like my law degree came in handy: after the police caught him, he refused to consent to a search, so I knew that even though he had our stuff, we wouldn't be getting it back any time soon because the police hadn't yet secured a warrant. Even if I can't get a job, at least my education helped prepare me for disappointment. Who knows if we'll ever get it back as it's now currently being used as evidence.

The next morning, I called a locksmith and begged him to rekey my car (and even talked him into picking us up from our hotel -- you haven't lived until you've sat in the back of a van, on a stool that probably isn't even street legal) in time for us to make it to our gig in Idaho. Luckily, he obliged. And thank goodness for the generosity of Steve Sabo, who not only lent me money for the rekeying, but helped me prove my identity when I tried to check into hotels with no identification nor credit cards.

The rest of the trip was a blur of dealing with insurance companies and police.

But, we did have a lot of fun in Billings, where we literally got to hang with Mr. Cooper at the St. Patrick's Day parade. 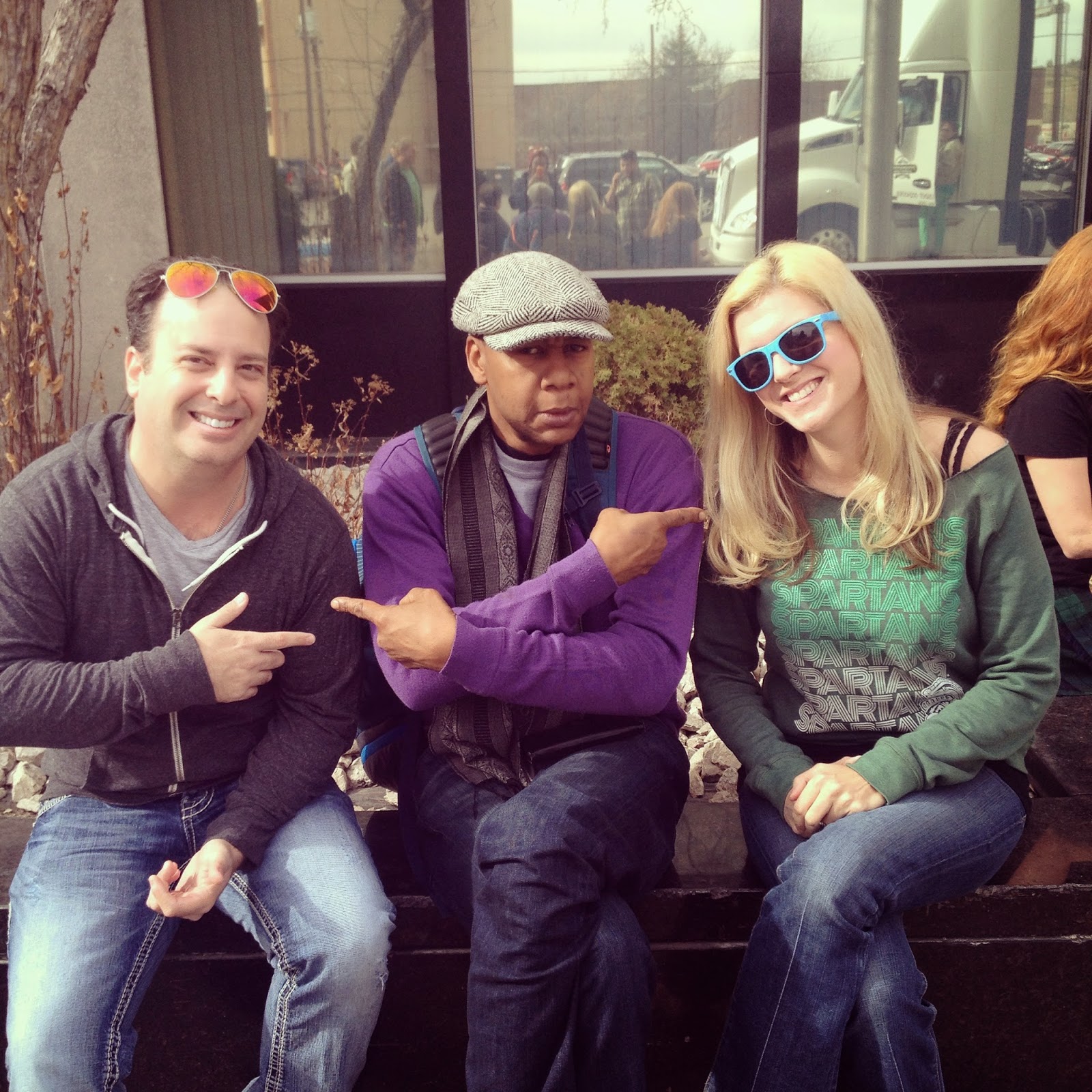 The parade was small, but cute, and after searching for two hours, we finally located green beer. Us with the good stuff: 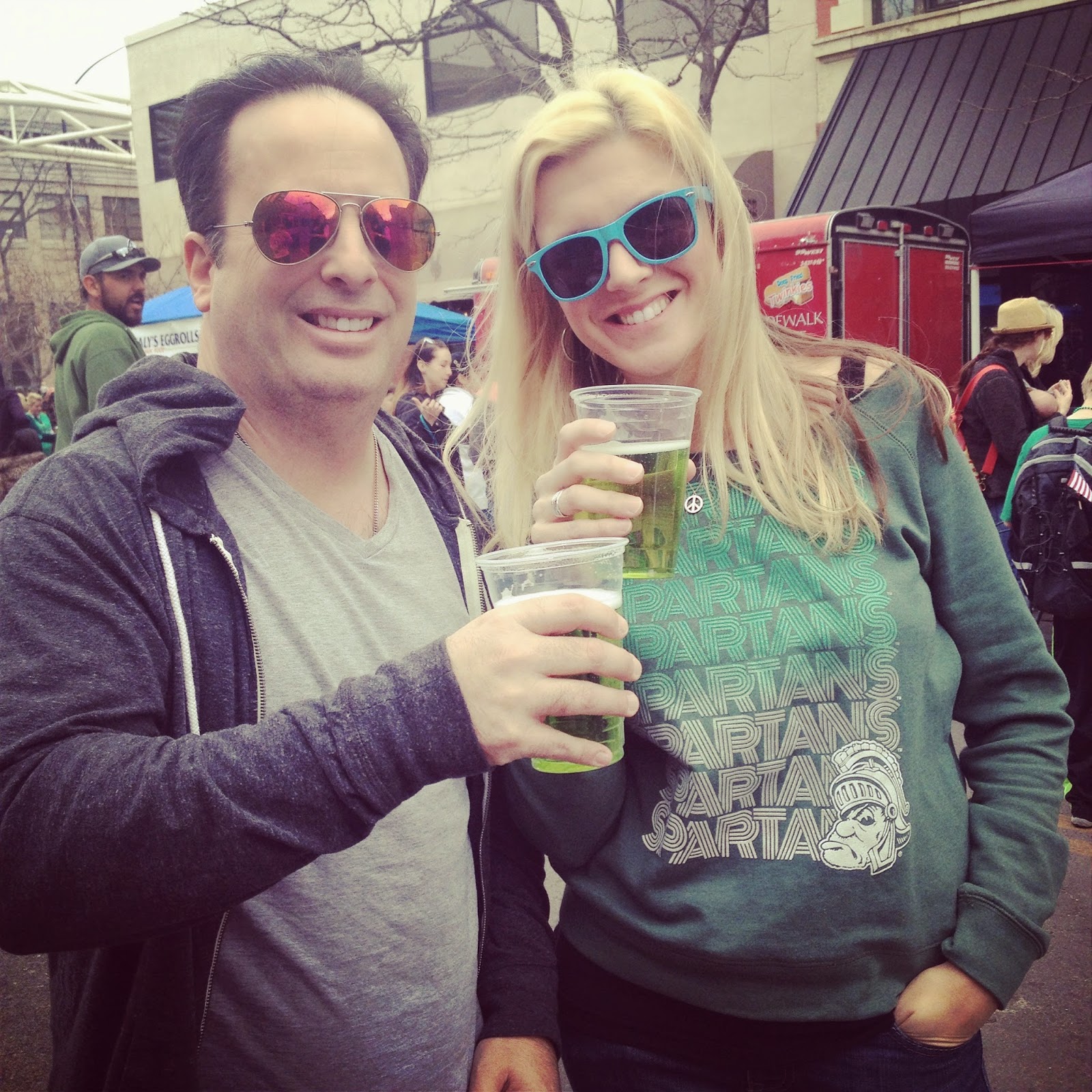 And, we met this guy whose hat game was seriously on point. 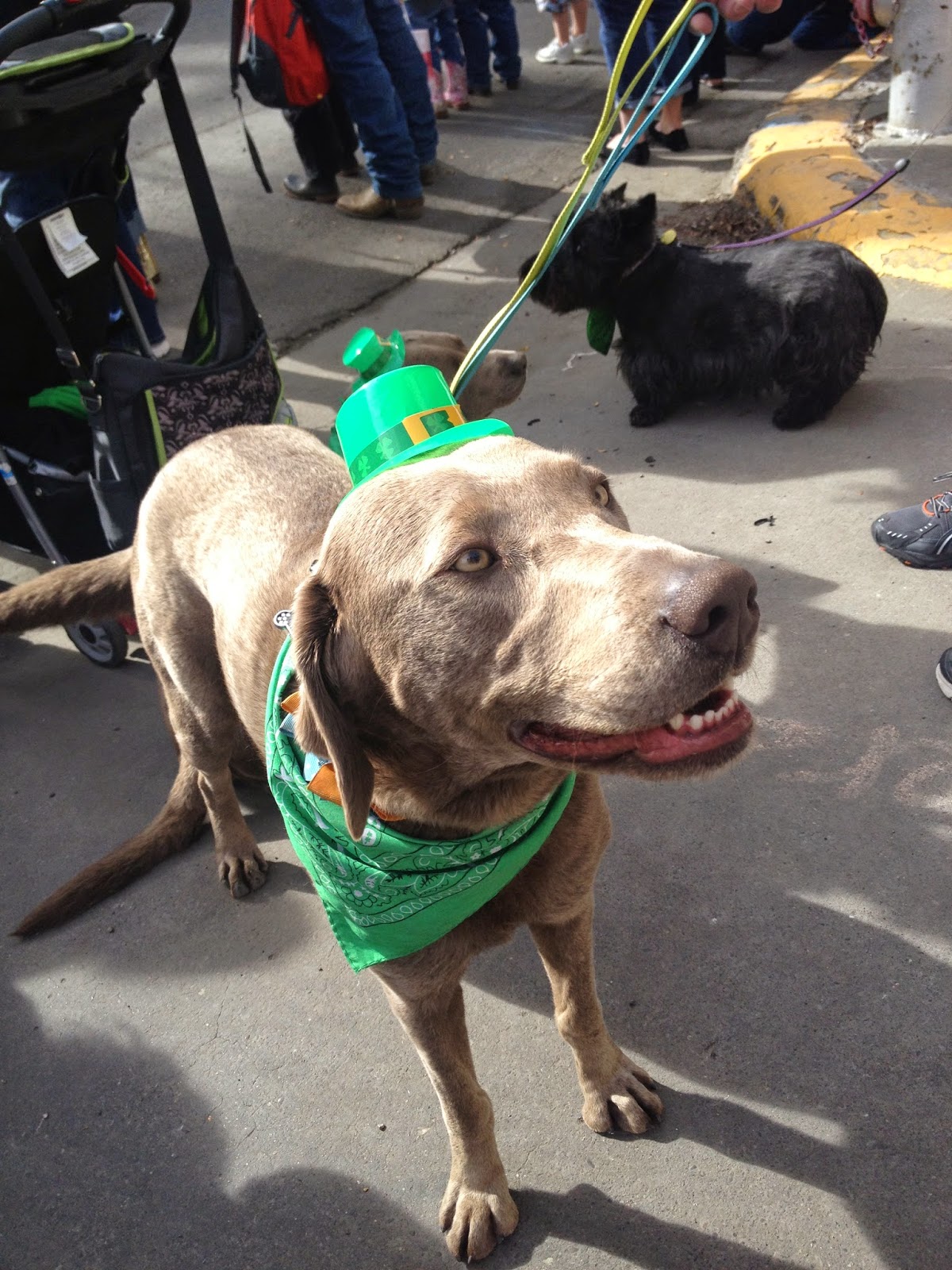 We even got to celebrate St. Patrick's Day again that night (this time with mustaches) in Miles City. 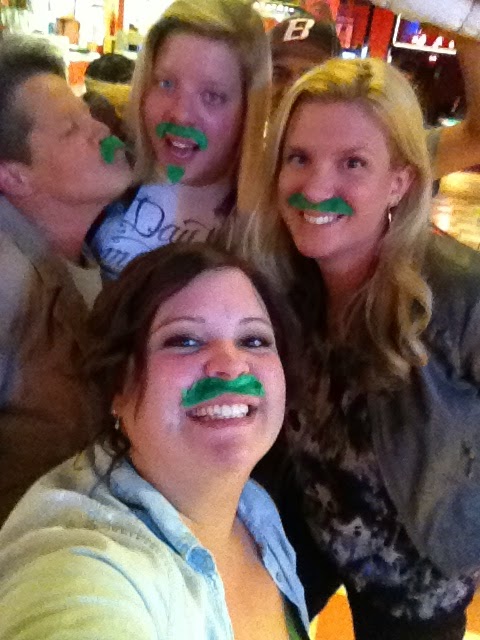 After playing a matinee show in a wedding hall on Sunday (which was surprisingly fun, despite afternoon shows having a tendency to not be so great), we headed home. Again, thanks to Sabo for pulling us through the 3 - 5 am time slot (i.e., the time were my eyes really betray me and my body thinks it's nap time).

And thanks to Montana for its beautiful skies. Despite the robbery being irritating, I still got to look at this every day: 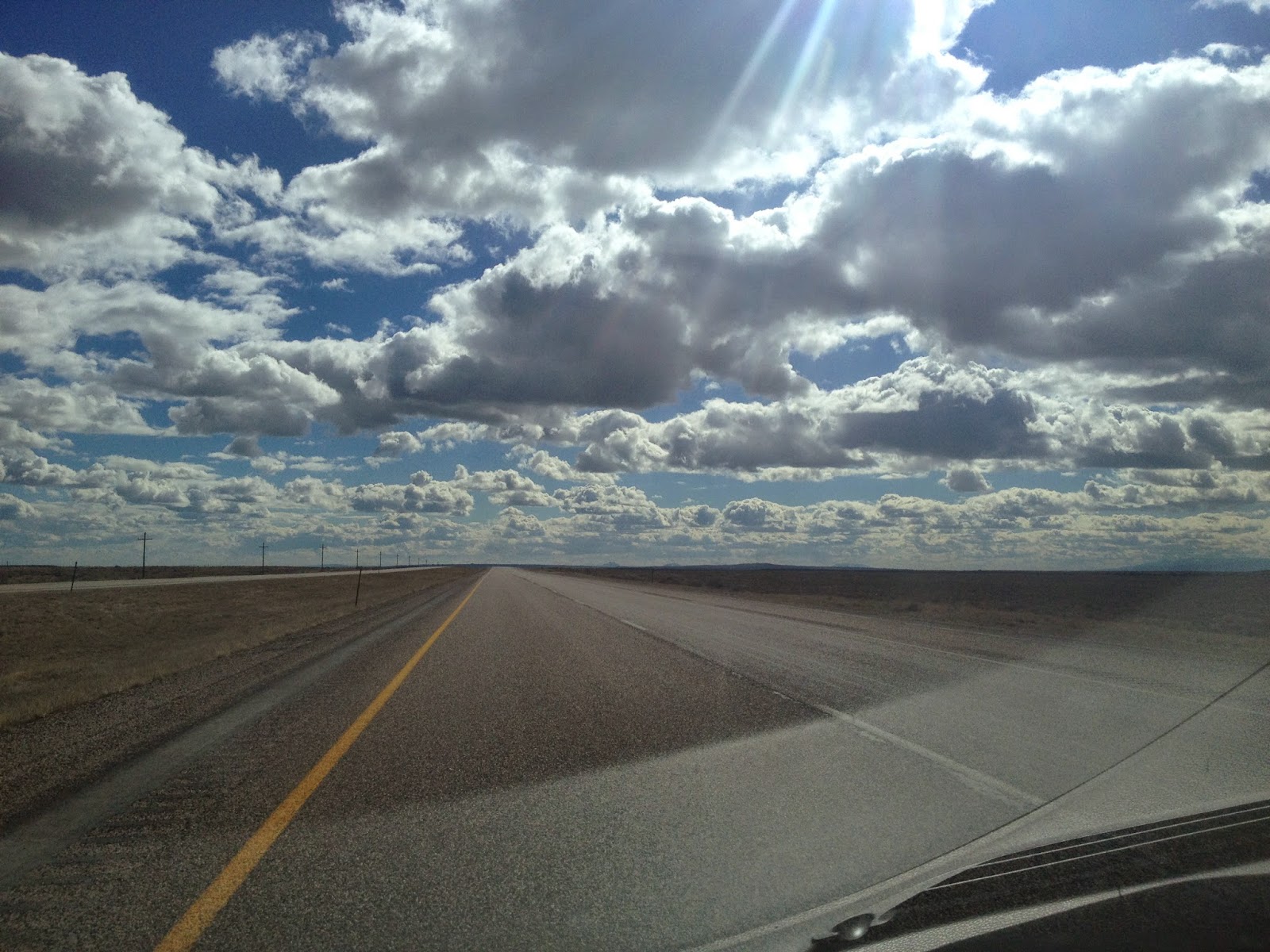 Posted by Kate Brindle at 8:36 AM No comments: 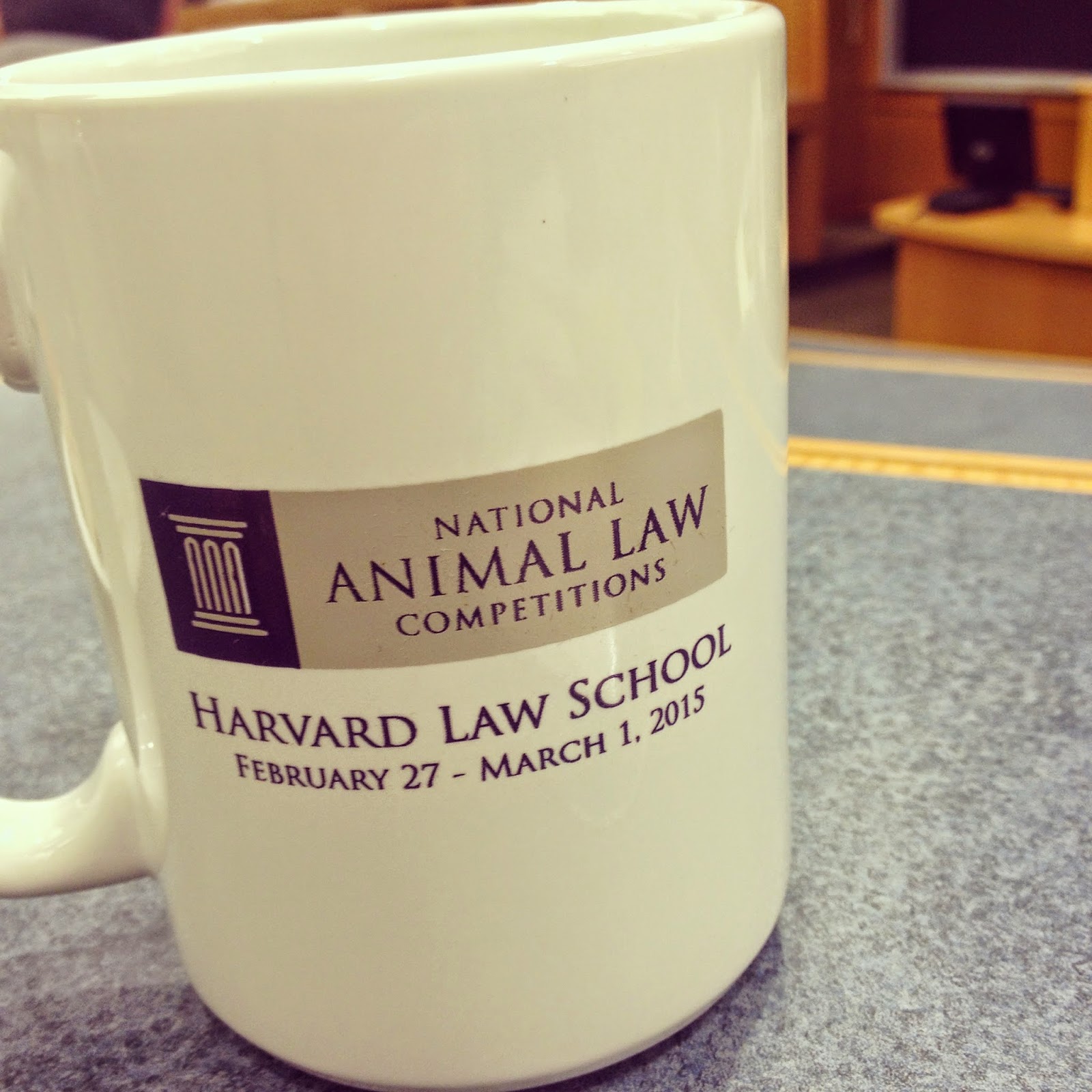 At the end of February, I had the pleasure of competing in the National Animal Law Competitions at Harvard Law School, and in short: it was amazing! I learned so much, had such a wonderful time, and it was easily one of the most valuable experiences I have had in law school.

Due to our early morning flight in Detroit, Claire, Alicia, and I met up at some ungodly hour to drive to the airport. Before leaving the house (yes, I am an expert at applying filters to eliminate under-eye bags). 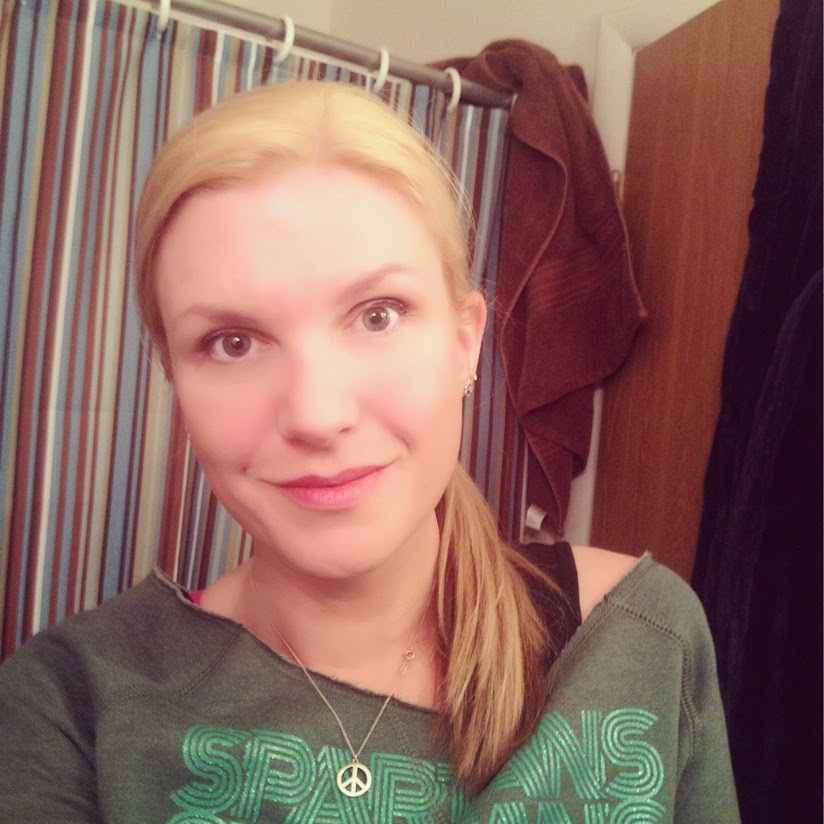 I am up way too early (3:30 a.m.), my hair is way too blonde, and I care way too little about neatly folding towels.

Every time I go to Boston, I am immediately reminded by how much I adore it. I'm sure it probably has something to do with my New Kids obsession given that they're from Boston and have some wicked cute (see what I did there?) Boston accents. 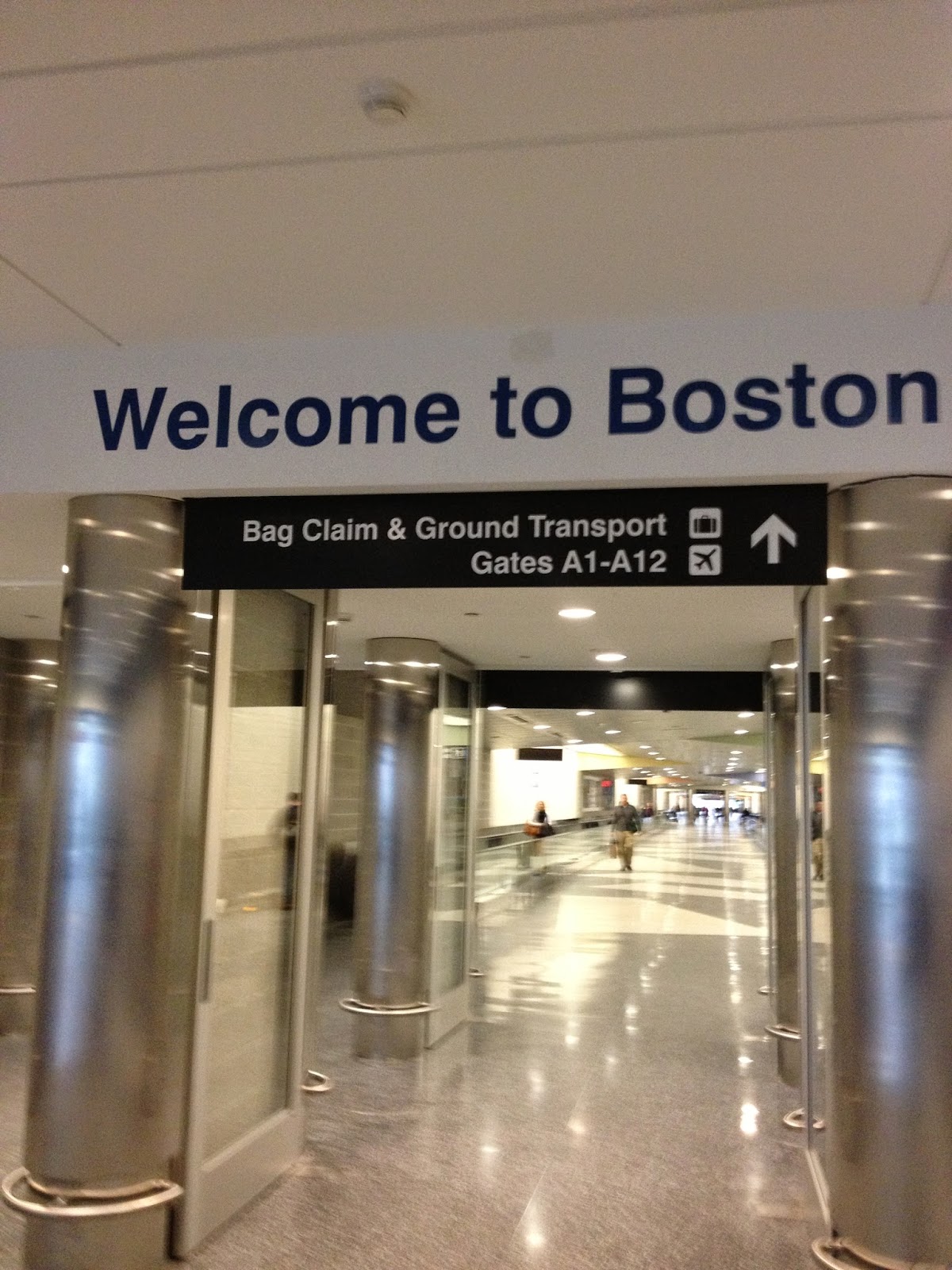 As soon as we got out of the airport, all I saw was snow.

Accordingly, a series of pictures I like to call "your instagram feed wasn't lying; holy crap, that's a lot of snow!" 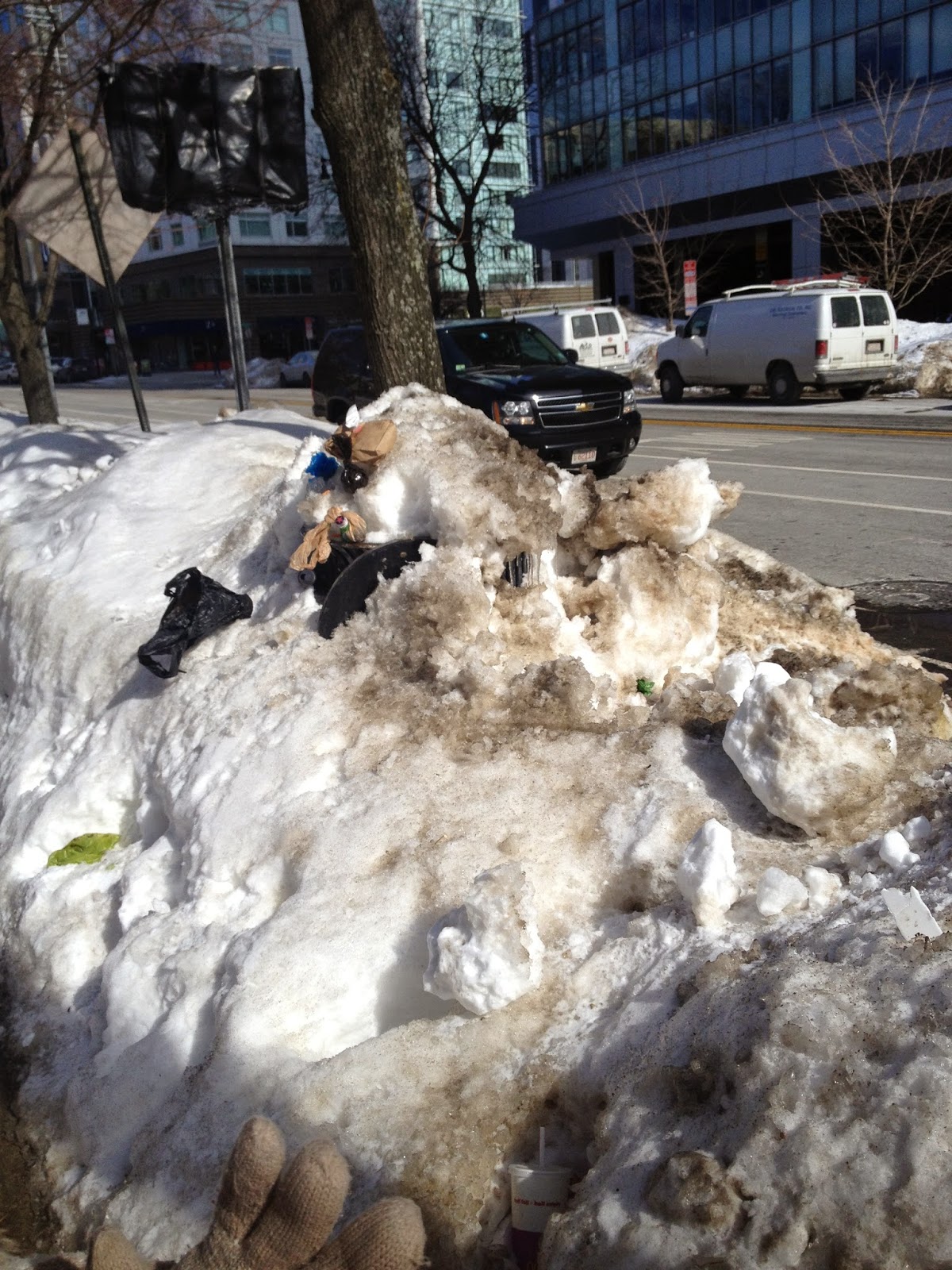 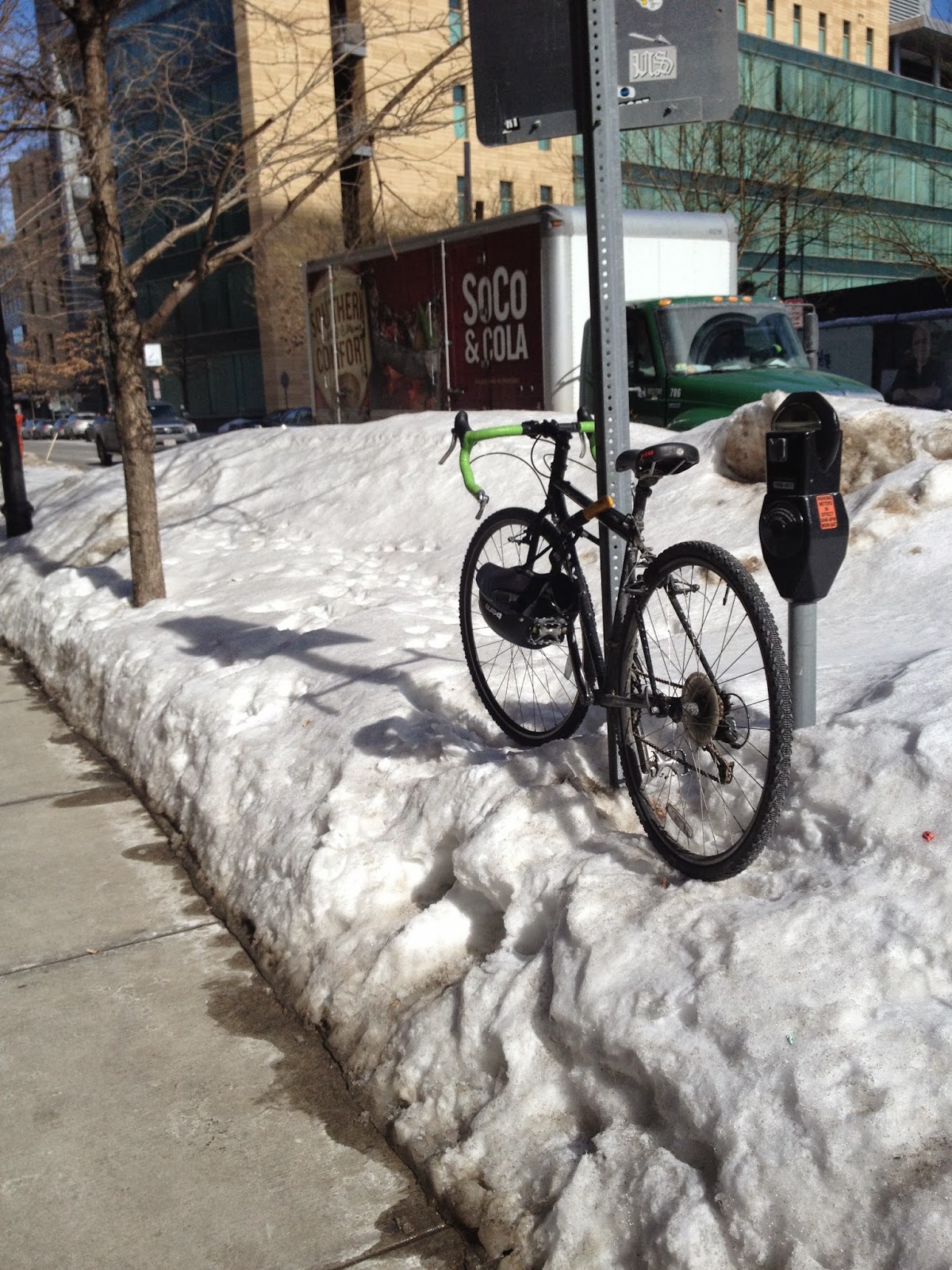 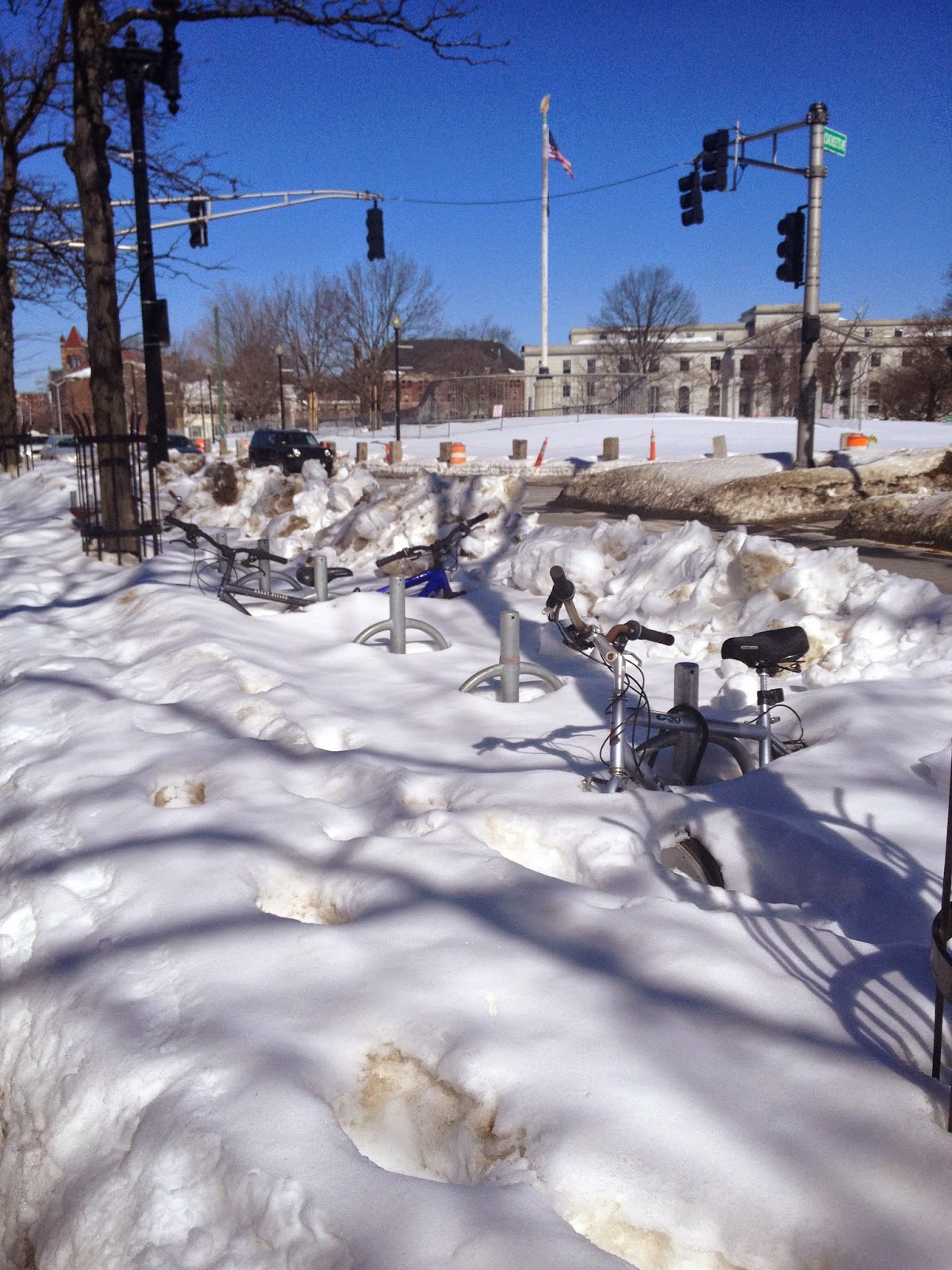 On our first day, we headed to a bar (Mead Hall) across the street from our hotel. Day drinking, party of two. We both had the Namaste beer, and it was pretty awesome. How cool is it that it came in its own cup? 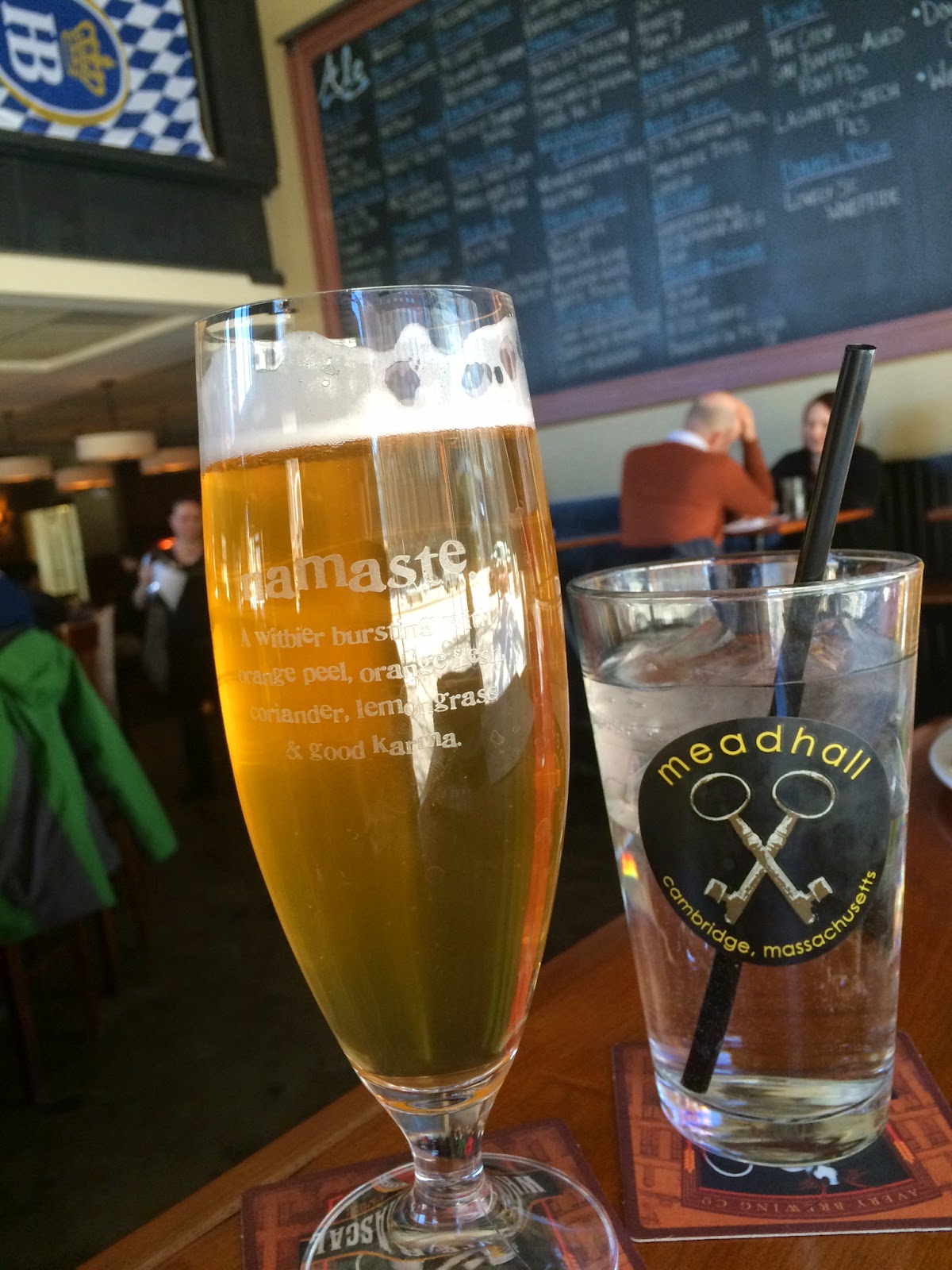 We then headed over to Harvard, where I promptly fell in love. Prior to this trip, I hadn't explored Cambridge too much, and Harvard Law School was everything you can imagine and more. They had their own pub and cafeteria, and it was simply gorgeous. All of Harvard's campus looks like something out of a Harry Potter movie (or, at least I think so anyway; I haven't actually seen a Harry Potter movie), but the law school takes the cake. 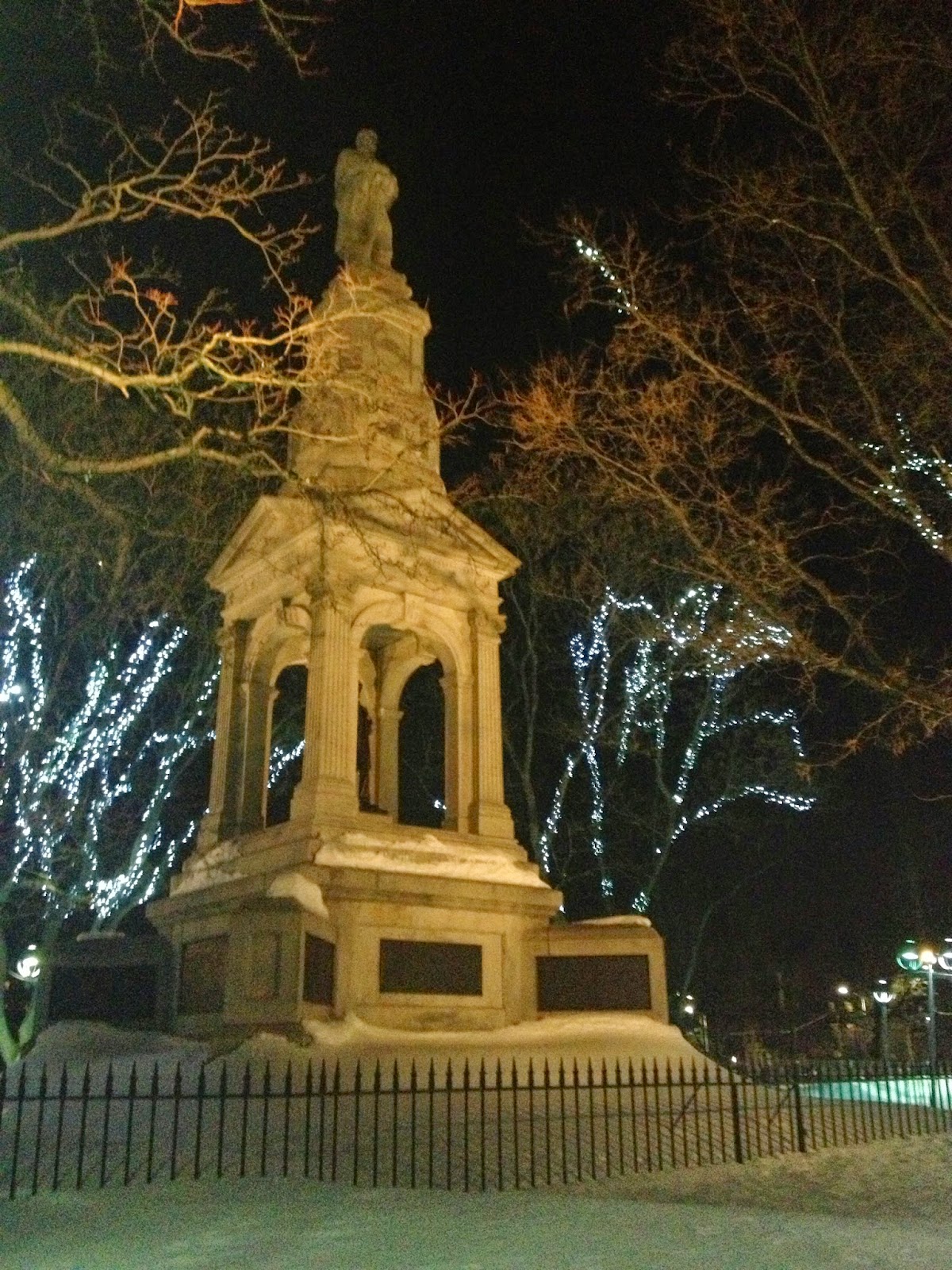 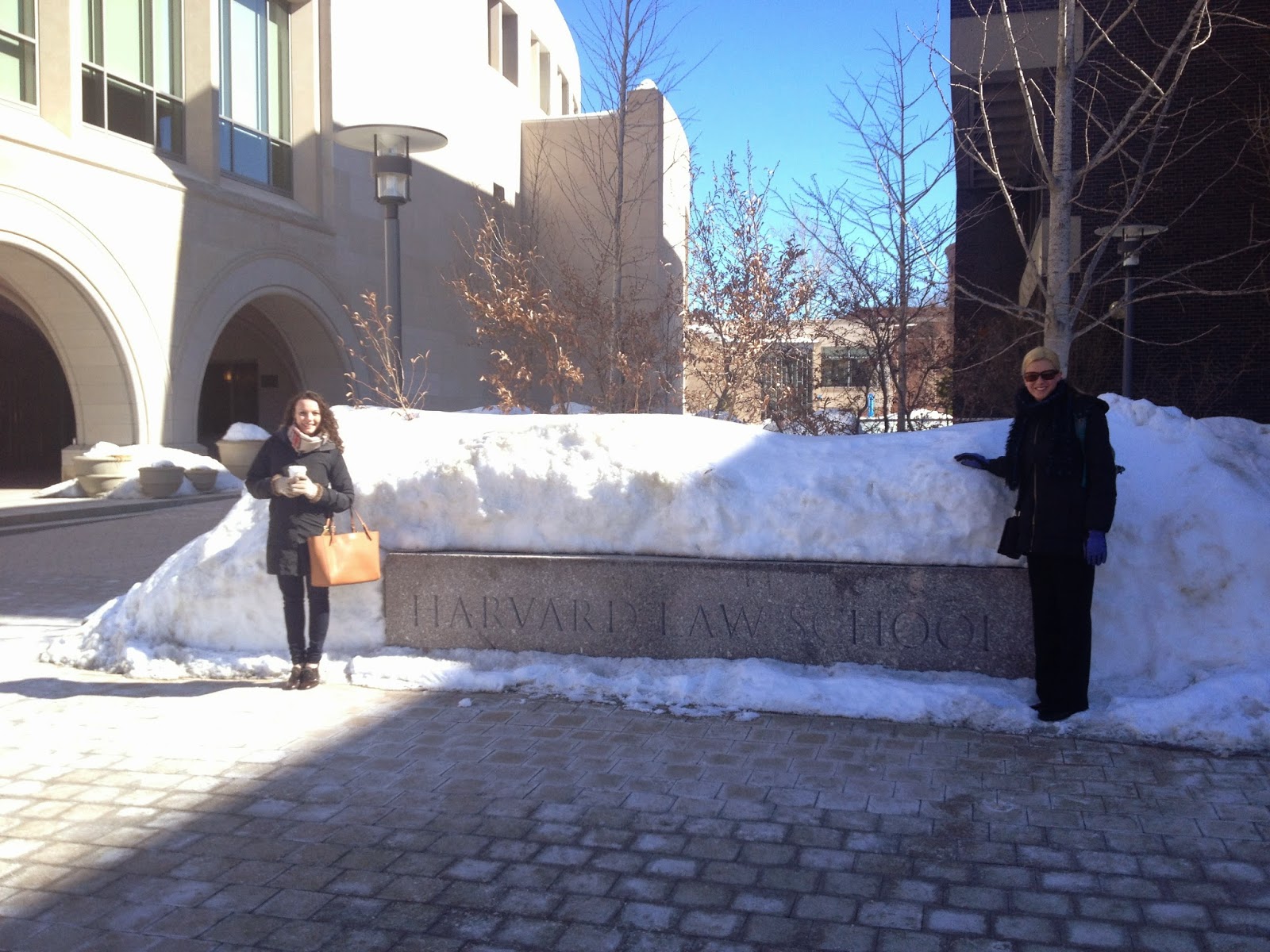 I wonder if Harvard students pose near the MSU Law sign?
Can we just take a movement to bow down to the food at this conference? The whole thing was vegan, and I was in all sorts of heaven. This was one of the breakfasts. 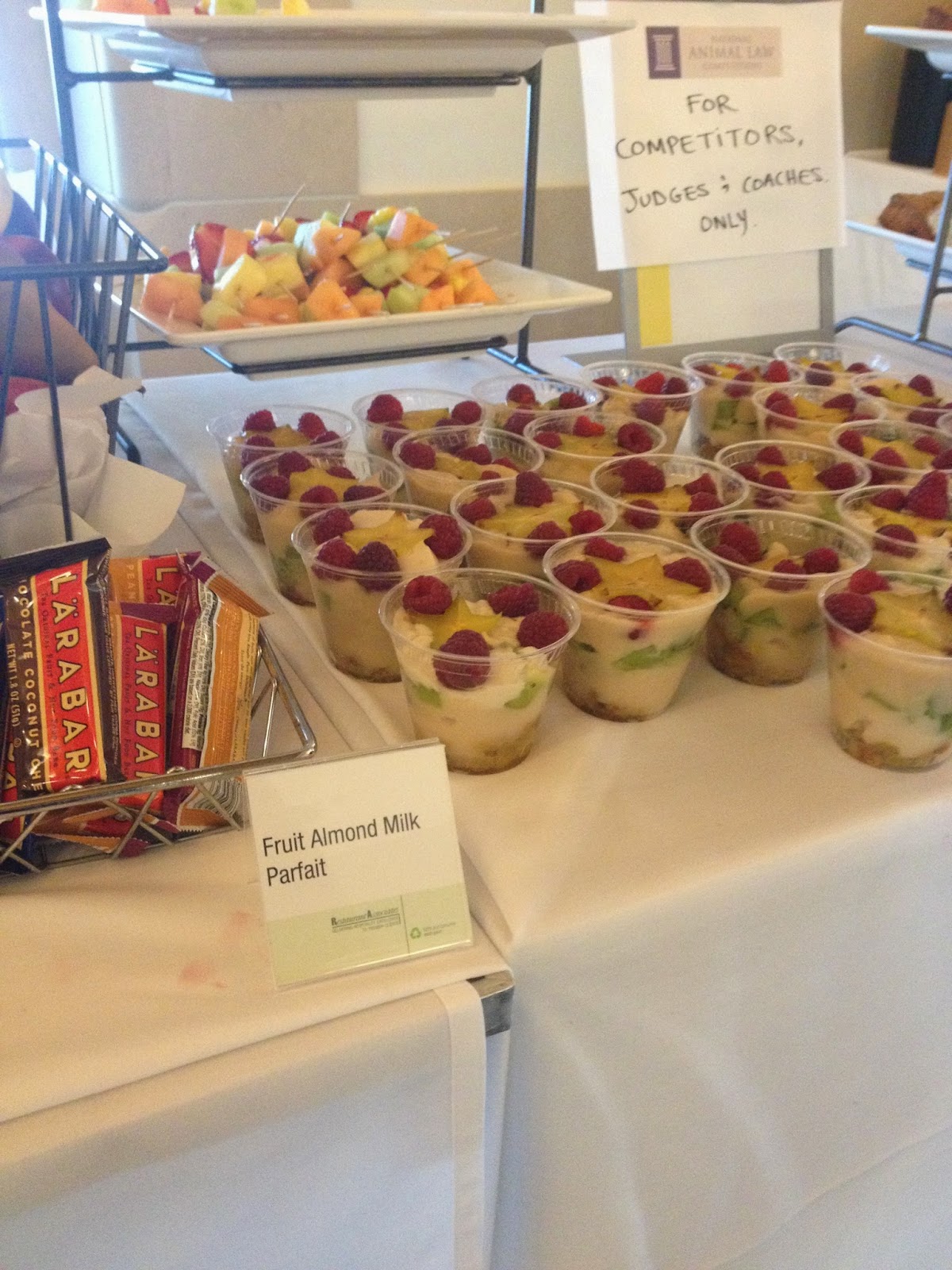 Our competition started on Saturday, and I'm not going to lie: I was pretty nervous. Despite public-speaking for a living, I still get nervous about these sorts of things. Something about experts in the field firing questions at you while you're talking is a little terrifying.

But, I was pleased by how amazingly nice and encouraging everyone was! Some of our judges were among the premiere animal law practitioners and animal legal scholars in the United States. So, arguing in front of them and hearing their positive feedback gave me confidence and made me feel encouraged that I can use the skills I have learned in law school and apply them to real-life animal protection work.

Not only did preparing our brief before the competition allow me to improve my writing and learn more about the Humane Slaughter Act and how it can be improved, but my experience at the tournament taught me many skills. I was able to practice giving oral arguments in front of justices who currently serve as judges in courts throughout the country. In addition to providing practical experience in the rounds, I had the chance to ask them questions after the rounds about what they find persuasive when they are adjudicating cases.

I was excited by our second place finish, and I left the competition feeling inspired and encouraged to continue dedicating my studies and efforts to animals. 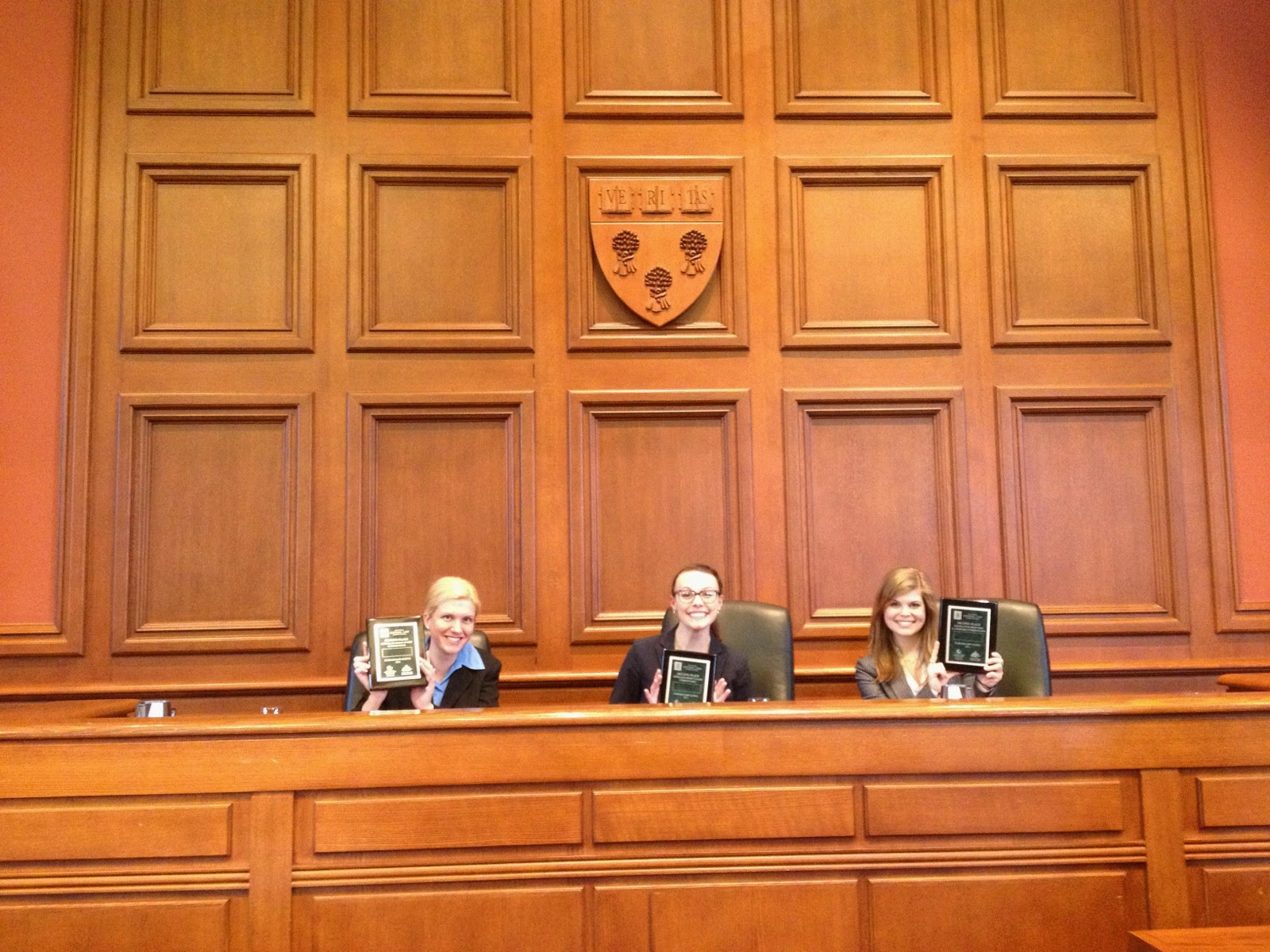 Our trip home was quite the adventure. And I can now say I've gotten a drunk guy kicked off a plane for groping and sexually harassing other passengers. Too bad I had a separate seat from Claire and Alicia and had to sit next to arguably the second most annoying guy on the plane (example: despite me repeatedly telling him I can't offer him legal advice, he kept asking me if he could pursue an assault with a deadly weapon case against a guy who spit in his mouth since the guy who spit might have had HIV; he also gave me a detailed history of all of the ways women have rejected him, complete with a sprinkling of swearing so heavy another passenger asked him to watch his mouth).

But, in the end, drunk guy and swearing-clueless guy couldn't wipe the smile off of my face for what a great time I had!

Oh, and if you'd like to watch a video of our final round, it's here.
Posted by Kate Brindle at 4:42 PM No comments: