My first 5K and Thanksgiving!

This year, my Thanksgiving week was quite eventful! I started the holiday by completing my first ever 5K (the Stuffing Strut in downtown Detroit). I never fancied myself a runner. Heck, I never fancied myself much of an exerciser at all, really. But, for some reason, I got this crazy idea in my head around early summer that I should compete in a race. So, I started, slowly but surely, working on the Couch to 5K program, which I highly recommend. When I first started, I got winded by running for more than 45 seconds (not even kidding about that one, folks). And now, I can actually run a 5K without walking (or hyperventilating too much). 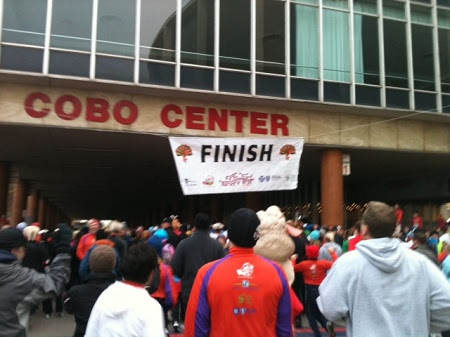 The race weather couldn't have been better (mid-50's), and since the race course was the same as the Thanksgiving parade route, there were people everywhere cheering the runners on (all 20,000 of us). I absolutely loved the energy! I was a bit concerned about how I would feel as I only slept for four hours the night before, but hearing the cheers, seeing all of the people in costume and running through downtown Detroit gave me such a surge and I was actually excited to be jogging.

In the evening, I went to my mother's house, where we made a vegan feast! On the menu this year: vegan meatloaf, stuffing (my grandma's old recipe, which I veganized), green bean casserole, apple/walnut salad, mashed potatoes, rolls and pumpkin pie. 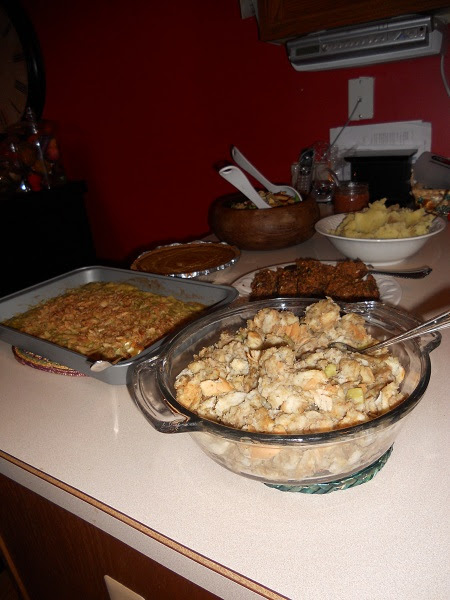 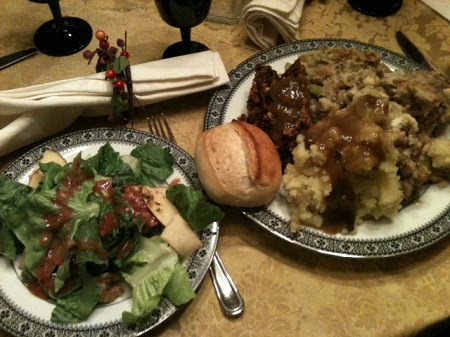 After eating, I went into a bit of a food coma. Not before snapping some shots of my family though. 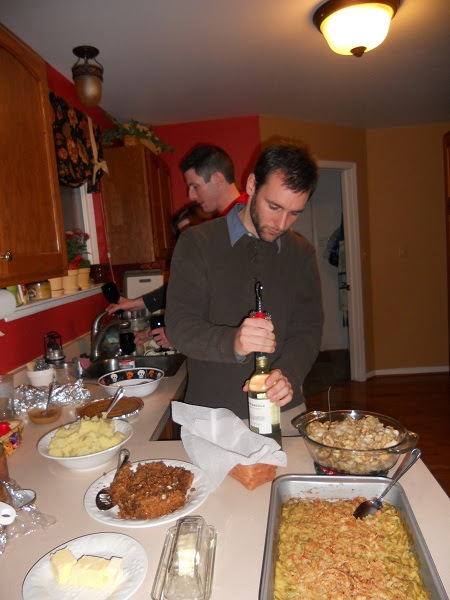 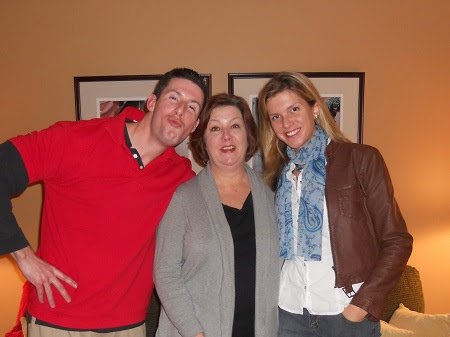 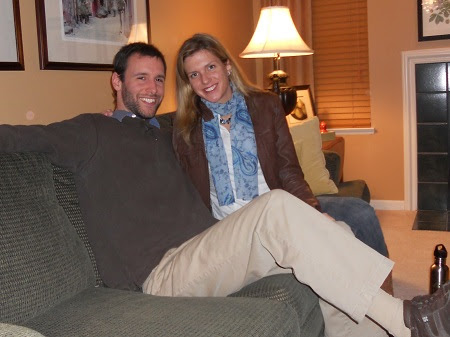 During the weekend, I performed at Leo's Komedy Korner in Windsor, Ontario. Leo's has always been one of my favorite clubs. The crowds are smart, and the staff are out-of-this-world nice. I performed with Leo DuFour and Tim Rowlands, and we had two great shows. I even had some friends of mine join me at the show, and of course, I made a stop to Tim Horton's. The best part though? I made it through the border with absolutely no hassle. So yay to not getting strip-searched!
Posted by Kate Brindle at 9:54 AM 1 comment:

While I hope everyone has a nice Thanksgiving and gets to spend time with their families (or chosen families), I also think it's important to consider the realities of this holiday. We go around laughing and saying, "gobble, gobble." We discuss cooking techniques to get the perfect texture. We take pictures of the finished "product" (not that I am above this). But, I think we forget about how the turkeys actually got to our plates. We don't see the suffering. Instead, we sit around, listing what we are thankful for, often forgetting that they lived a life of torture. They spent their entire lives suffering so our taste buds could feel good for five minutes.

From COK.net: "The average American consumes 17 pounds of turkey meat per year, resulting in the annual slaughter of 252 million turkeys—more than 65 million of whom are killed during the winter holiday season alone.

Most farmed turkeys spend their entire lives inside overcrowded and poorly ventilated warehouses that typically house up to 25,000 birds in a single shed affording as little as one square foot of space per bird. Such stocking densities make it impossible for most birds to carry out normal behaviors and cause the turkeys to suffer from stress and disease.

After 14 to 20 weeks, turkeys are transported to slaughter without food, water, or protection from extreme temperatures. At the slaughter plant, the birds are dumped onto conveyors and hung upside down in shackles by their legs. In the United States, there is no legal requirement that poultry be rendered unconscious before they are slaughtered.

Profits have taken priority over animal welfare. Standard industry practices cause turkeys to experience both acute and chronic pain. The treatment of these animals would be illegal if anti-cruelty laws applied to farm animals. But in the United States, unlike many other countries, there is no federal legislation protecting turkeys (or other poultry) on the farm, in transit, or during slaughter; and most state anti-cruelty statutes do not apply to farm animals.

This sort of cruelty is entirely preventable. And it's so easy to have a vegan Thanksgiving. For a list of delicious, cruelty-free recipes, I urge you to visit the follow sites:

I know it’s easy to forget about what really goes into the food on your plate, but I think it’s especially important to remember today. I hope we can all be thankful for compassion and practice it ourselves by having a cruelty-free holiday.
Posted by Kate Brindle at 7:38 PM No comments: 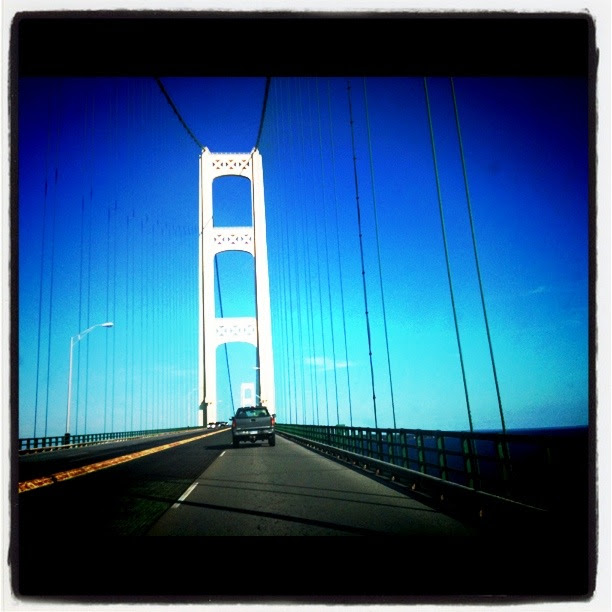 I performed in White Pine, Michigan this past weekend. When the booking email went around saying which gigs were available, I saw "Michigan," and thought, wow, that'd be great to be home for the weekend. So I put it for it. When I got the itinerary, it dawned on me what a large state Michigan truly is. Turns out, White Pine is roughly ten hours from my house. So much for being home for the weekend.

But, alas, I grabbed some of my best music (read: boy band cassette tapes) and self-help/meditation MP3's (personal growth and getting your life together seem like a great way to kill a long drive, right?), and I was off. The drive wasn't too bad, and it flew by fairly quickly. And bonus for the Mackinac Bridge actually being open this time around (unlike last time I was there).

After driving in nothingness for what seemed like hours, I finally arrived at the gig. I was quite shocked to find I was going to be performing in an entertainment complex. This place had a tanning salon, bowling alley, and bar. That's, like, the trifecta of fun right there (AKA heaven to the cast of Jersey Shore)! It also had hotel rooms and a spa attached to it (yay for being able to stumble home after the doing several shots).

Before the show, I perused the hotel's bookshelf and found this: 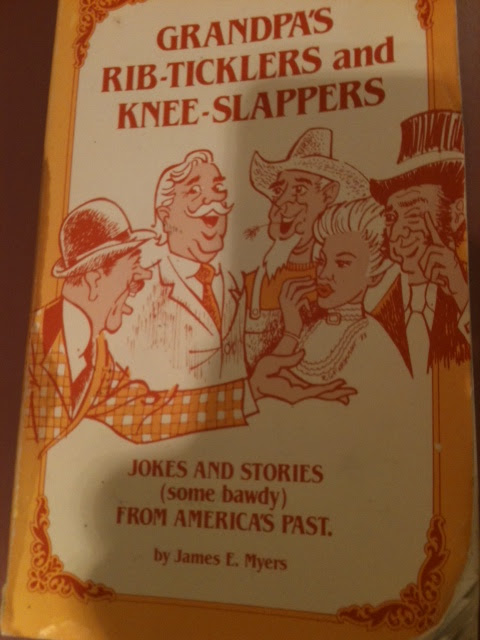 Unfortunately, it didn't contain any material I could actually use in my set.

A picture of the spa (yes, that sign does contain a warning to watch for black bears): 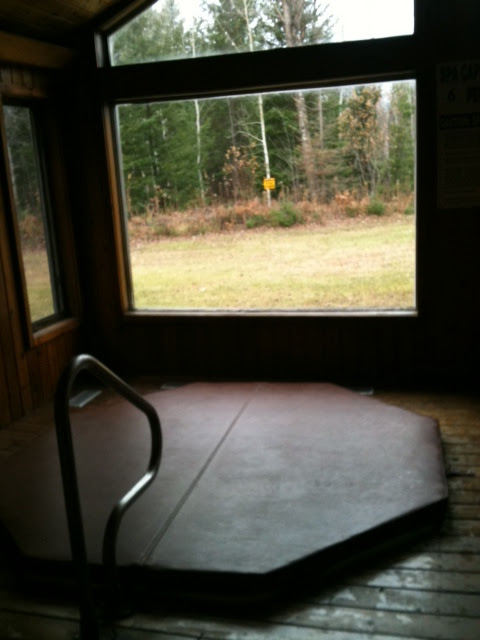 The show was really fun! And it was packed. The town seemed so small, and I was pleased that they were able to get such a great turn-out. And I sold a ton of bumper stickers ($70 worth to be exact). Congratulations, Yoopers, you just set a new merch record!

White Pine is in a really beautiful area. It borders Lake Superior and the Porcupine Mountains. If you haven't ever made your way up there, I recommend it.

Here are some pictures that I tried to make all artsy-fartsy with my new iPhone app. I took these the morning after the show. It would have been ten times more tranquil had I not been hungover. 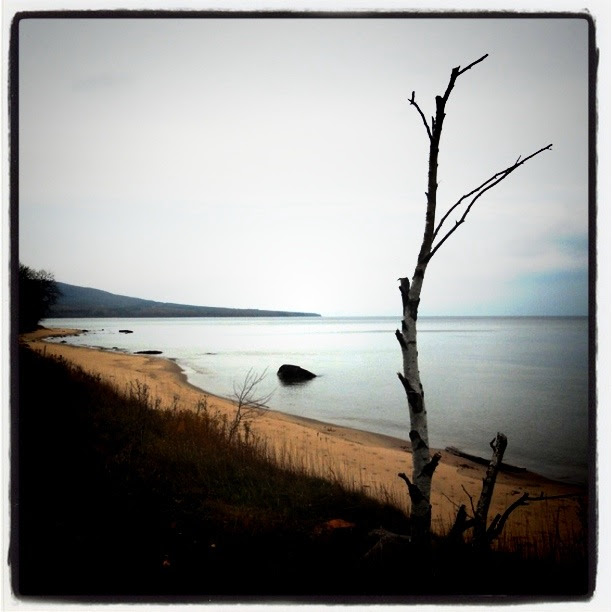 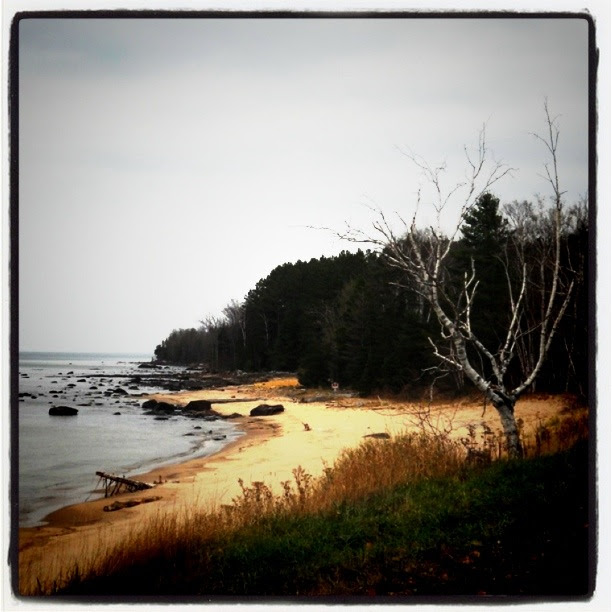 Posted by Kate Brindle at 2:15 PM No comments:

I absolutely love Halloween. In the words of Celine Dion, I lurve it! In the words of 50 Cent, I love it like a fat kid loves cake. So, as you can imagine, I was quite excited that, this year, I got to have a week's worth of Halloween festivities.

On Sunday, October 23, 2011, I performed at the Laugh Riot Dolls' Halloween Show at Joey's Comedy Club in Livonia, Michigan. It was so wonderful to perform with many of the funny women of Detroit, and of course, it was great to bust out a Halloween costume a week early. 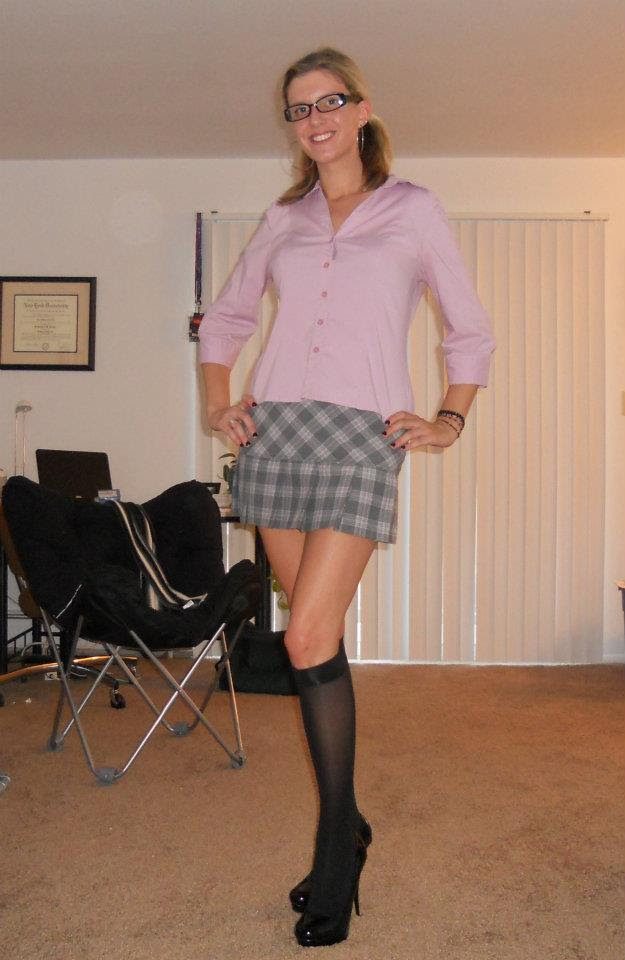 Pre-show in my apartment. Definitely the most revealing outfit I've ever worn on stage. 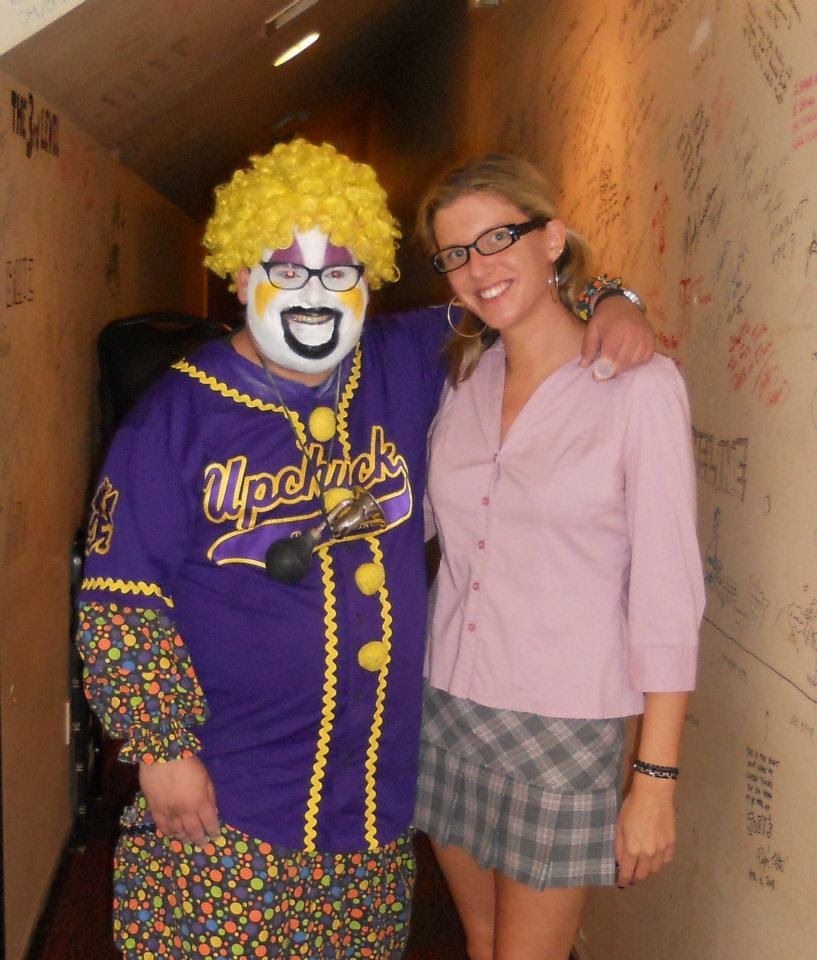 Backstage at Joey's Comedy Club with Upchuck the Clown from Psychopathic Records. Juggalos of the world: be jealous, be very jealous.

Some of the other dolls from the show: 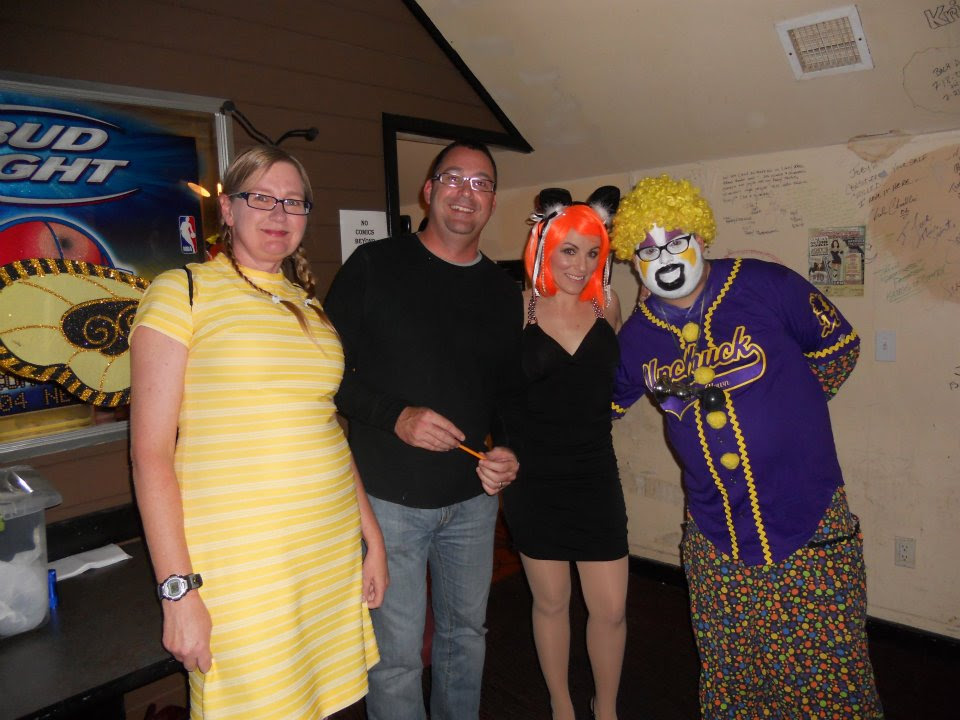 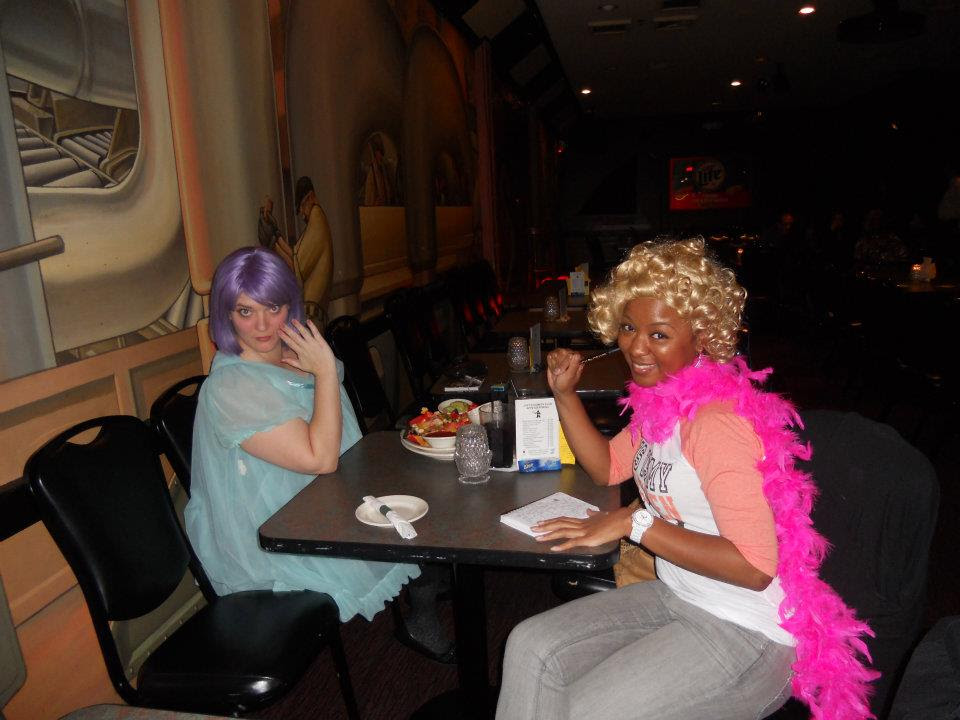 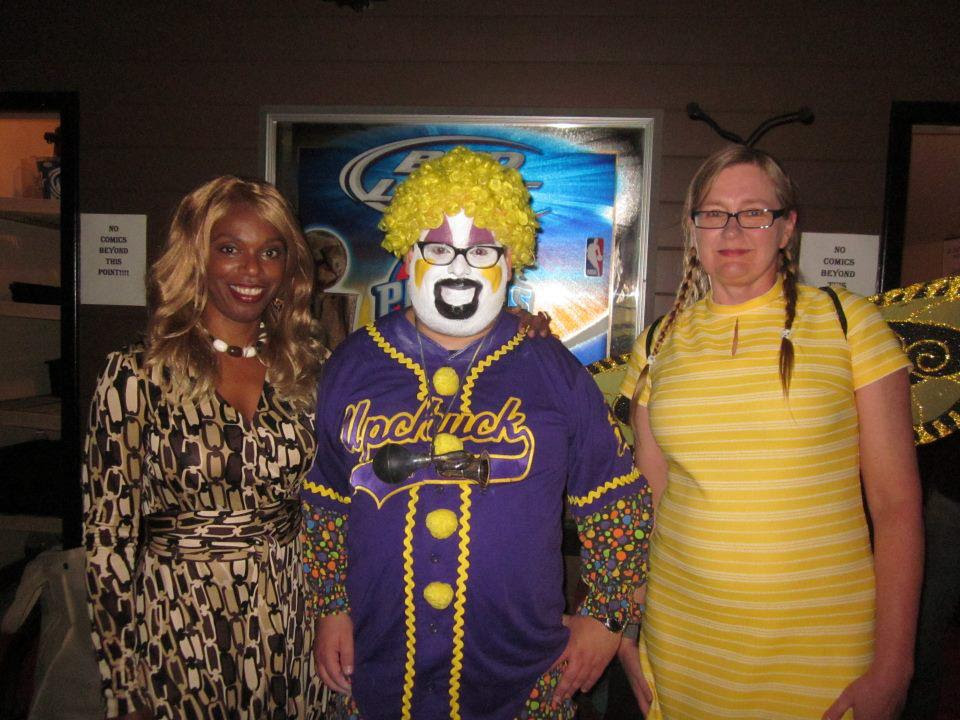 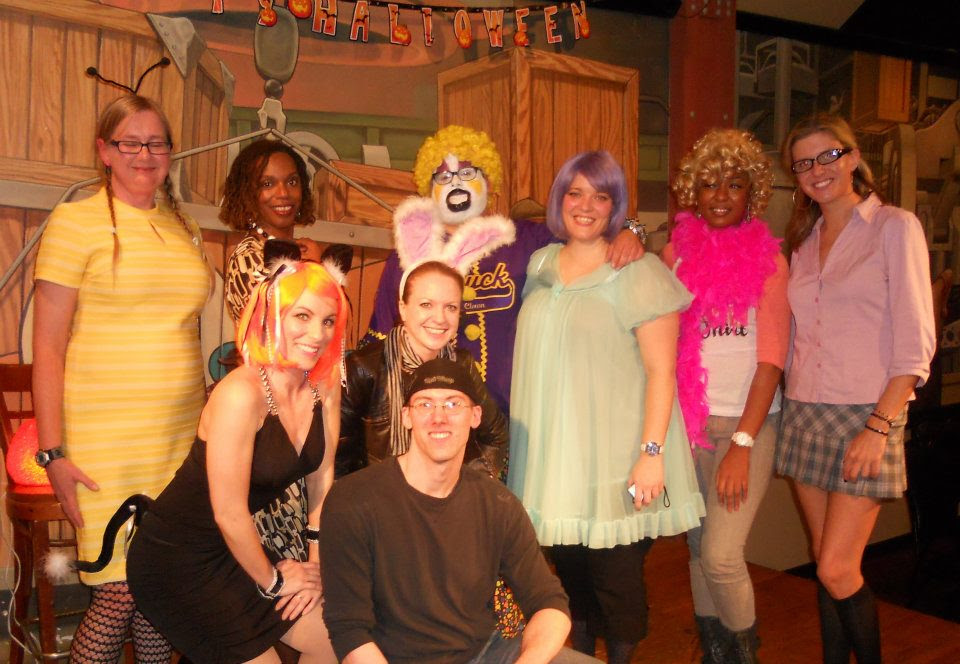 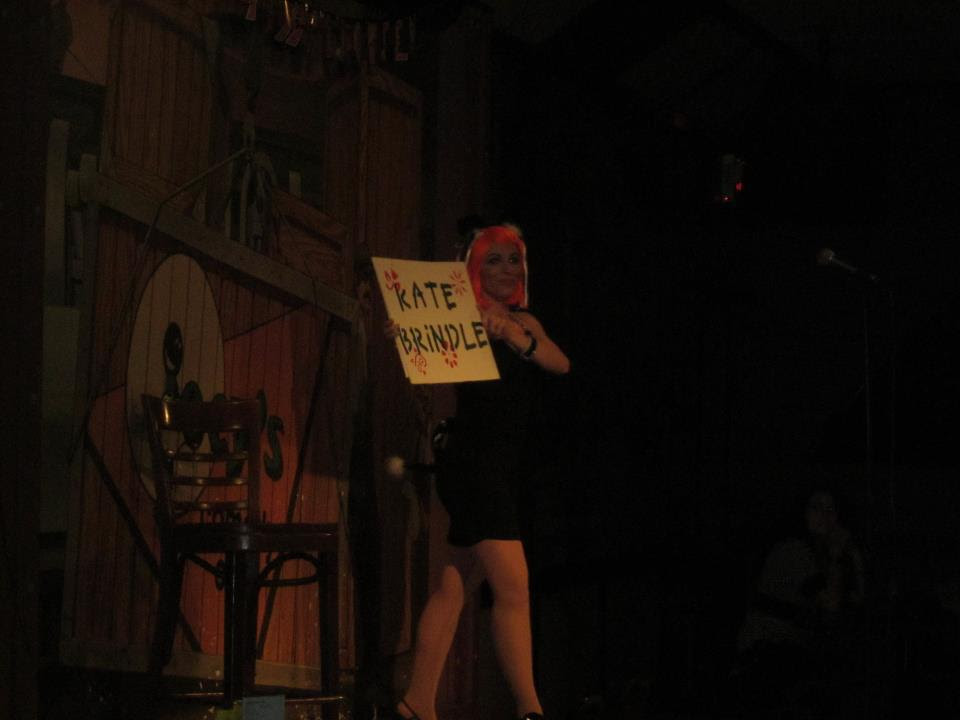 The following weekend, I headed to Rochester, Minnesota to perform at Goonie's Comedy Club for the first time. I had heard great things about the club (awesome audiences, really kind staff, etc.), and it definitely lived up to its reputation! Everyone was super nice there, and the audiences were smart and attentive.

Plus, the hotel (the Hilton Downtown) rocked! You know you're in a nice hotel when your room has mouthwash, a shower cap, and a lack of blood stained carpeting. 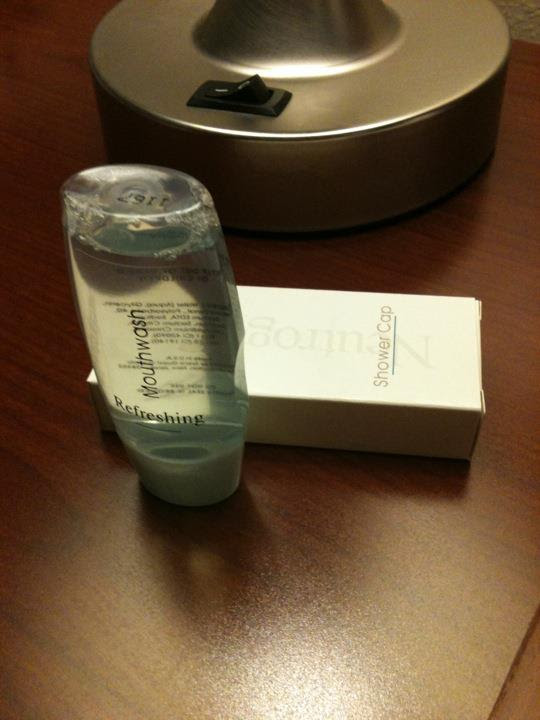 Not only did it have a nice workout room and pool, but it also had a refrigerator and microwave, which allowed me to make dinner every night. I swear, I'm going to write a cookbook and hotel room cooking (said book will feature ways to use the iron to make toast and coffee maker to make ramen noodles).

On Saturday night, nearly everyone at the club dressed up. Thinking nobody else would actually follow thru, I forwent my Halloween costume. However, when I walked in and saw people costumed as everything from Bat-Woman to a lime wedge, I was instantly filled with regret. 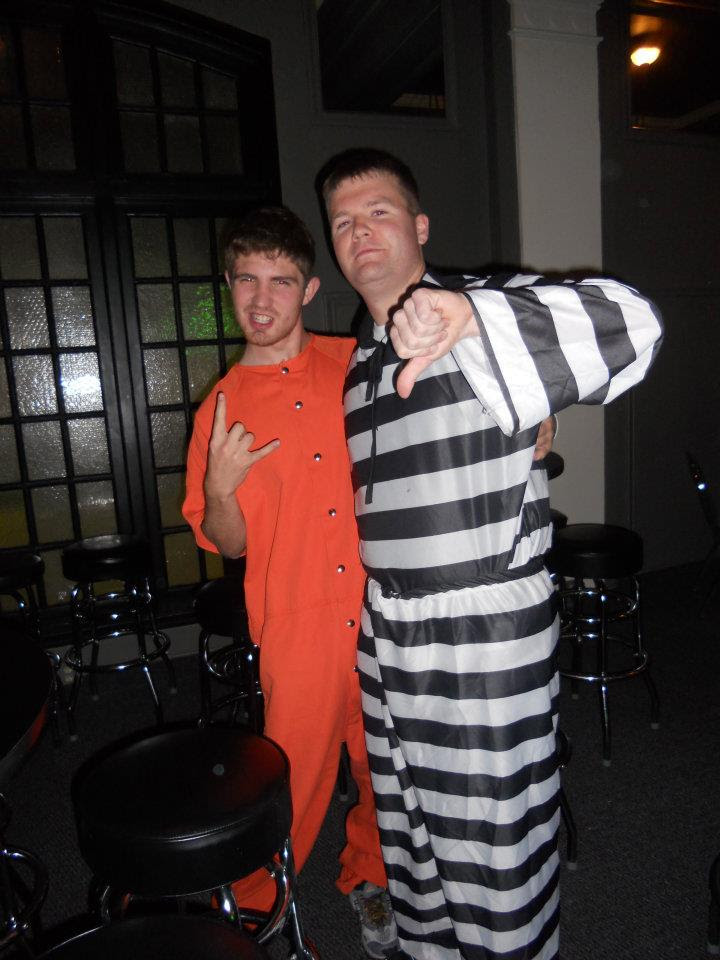 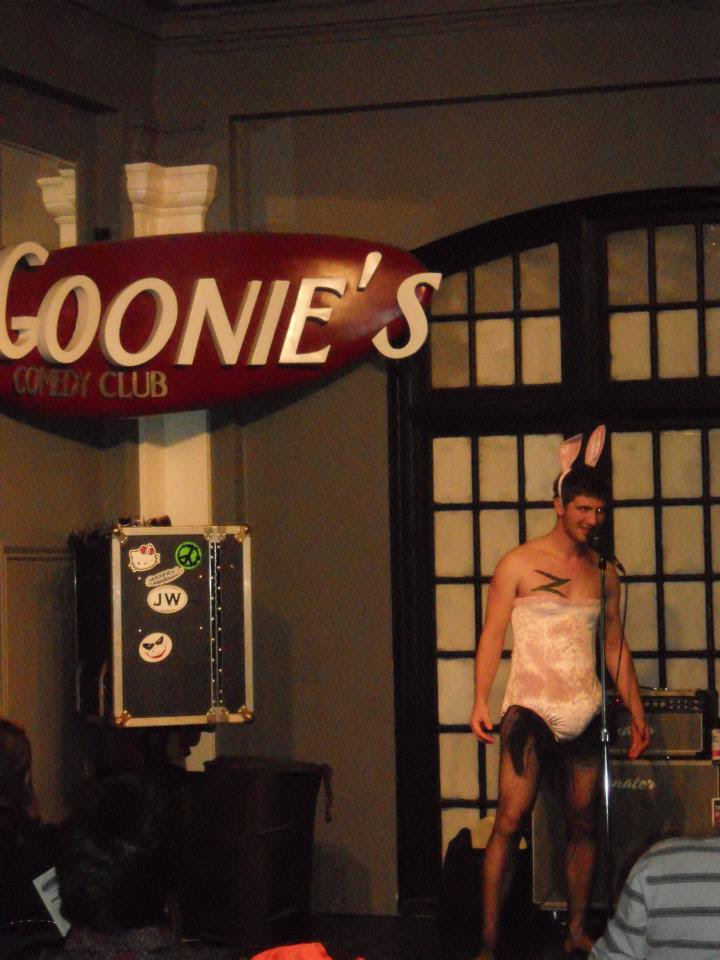 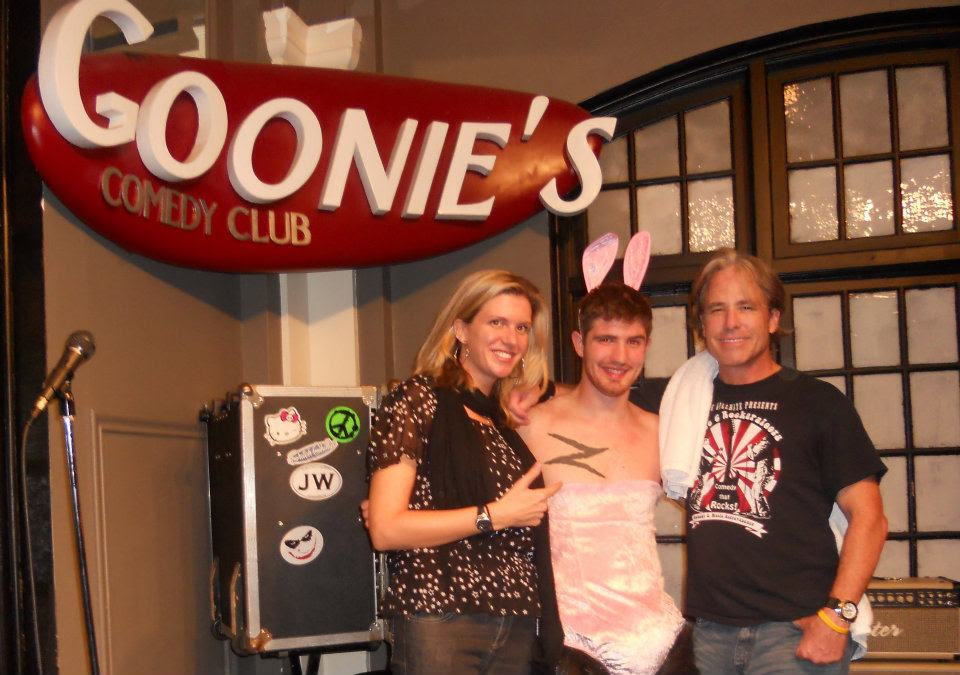 With Simon Zais (who MCed) and Jack Willhite (who headlined). 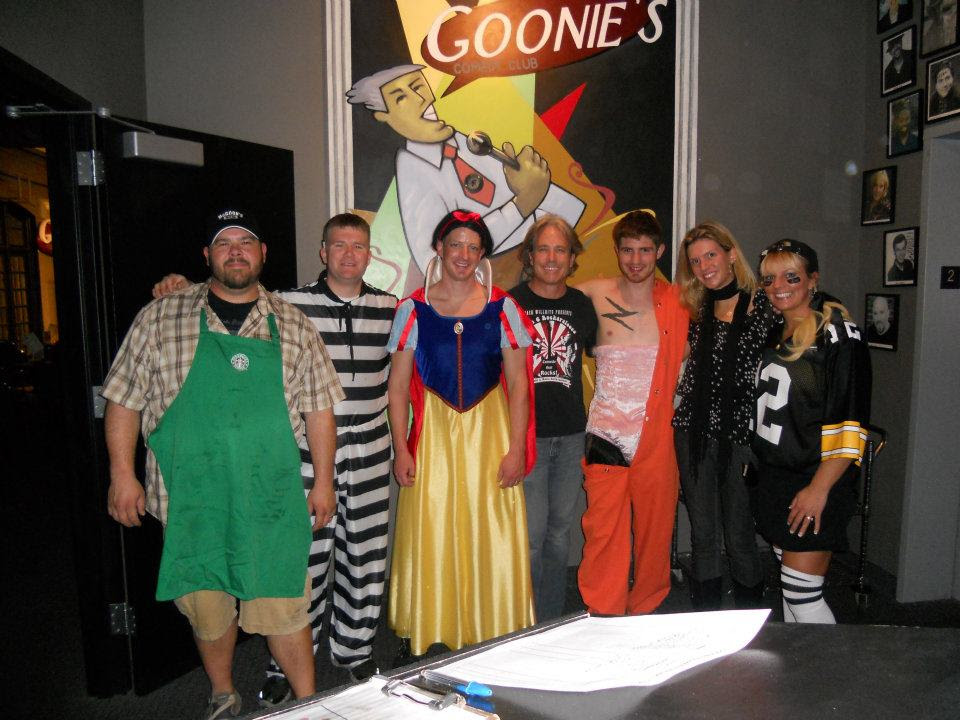 After returning home from Rochester, Drew and I decided to embrace the sluttiness that has become Halloween. Yes, we actually left the house like this. 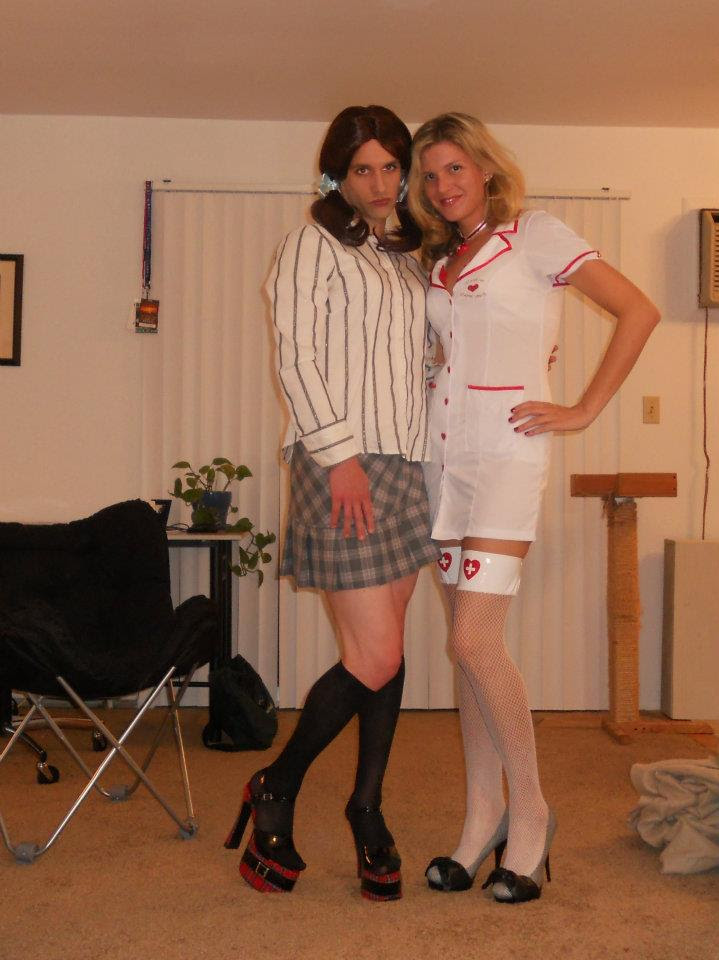 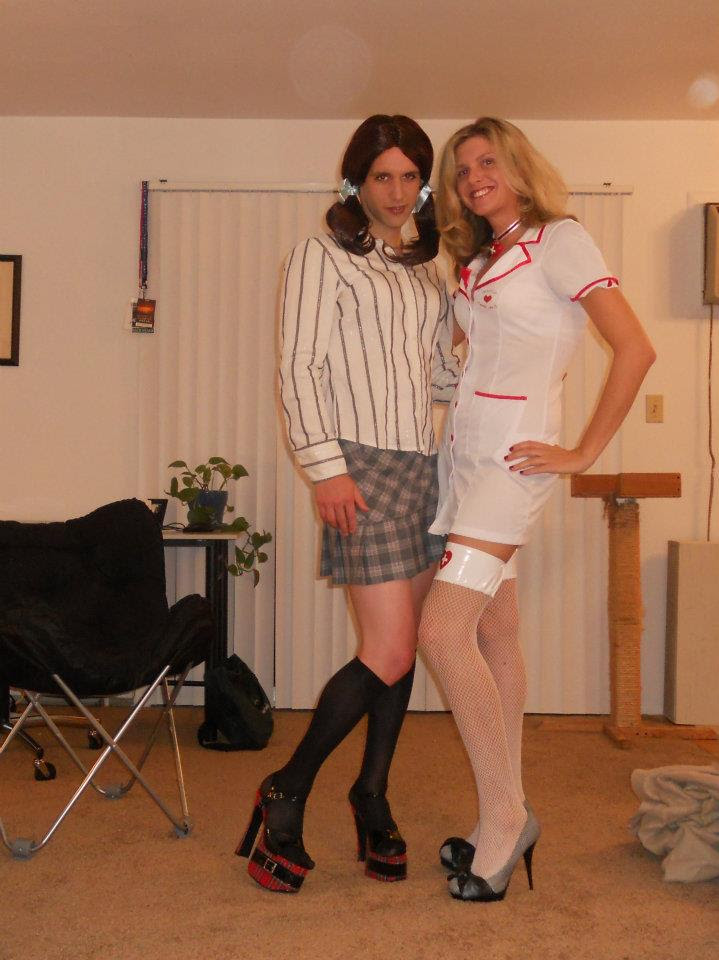 Due to the economic downturn, strip clubs have developed a multi-tier program. The one on the left is for men who've already had five pitchers of PBR. 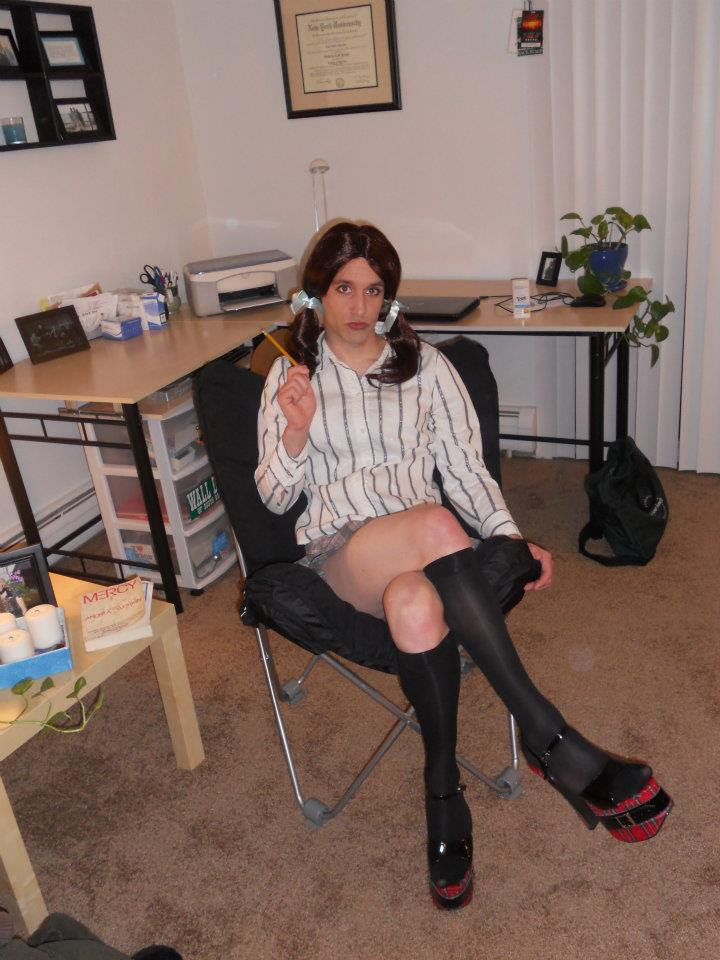 Drew is having a hard time finding work as a writer. 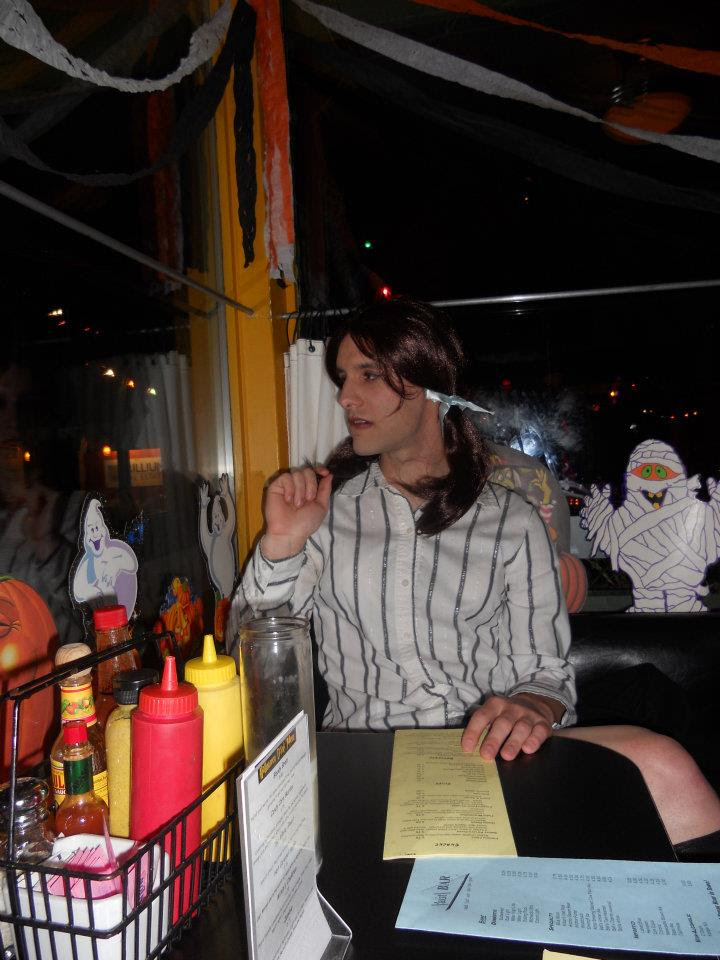 When Drew told his parents he was going back to school, this is not quite what they envisioned. 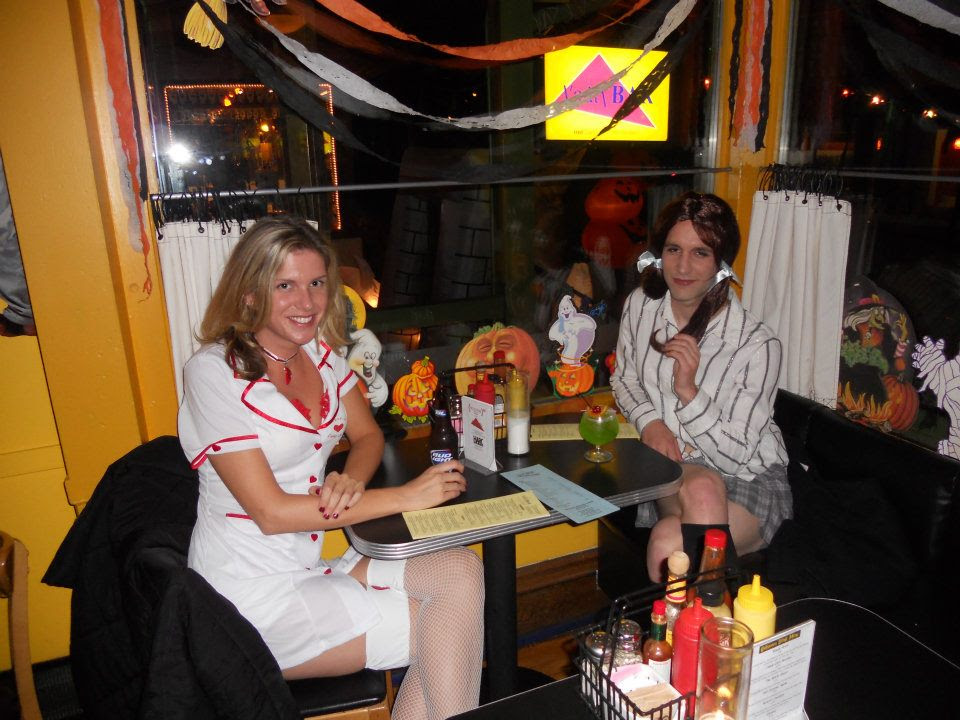 A nurse and a schoolgirl walk into a bar...

Sadly, since Halloween fell on a Monday, not very many other people were in costume. But, as you can see, that didn't stop us from rocking our skank-tacular outfits.
Posted by Kate Brindle at 7:48 AM No comments: