This week was mega-busy, but very fun!  In addition to studying and playing Candy Crush for 16 hours, I did a bunch of shows and participated in the Walk for Farm Animals (I also found time to eat copious amounts of Taco Bell as well).

On Wednesday, I worked with Norm Stulz at a fundraiser for the Boys and Girls Club.  I absolutely love Norm!  Not only is his energy fantastic, but he has stage presence that would make any theater major jealous.

After our show, we had some fun in the photobooth. The prompts:
1. You just got booked in Vegas!
2. Turns out it's a one-nighter in a bowling alley.
3. Where some really creepy weirdo hits on you.
4. Oh well, at least you won fifteen bucks on the penny slots.

On Friday and Saturday, I worked at the Ann Arbor Comedy Showcase.  I really can't say enough about how awesome this place is!  This is the club where I started, and the place I spent most weekends of my twenties.  They're moving locations, and while I'm sad that I'll no longer worker at the old one again, I'm excited to see what the future holds in an even bigger, better venue. 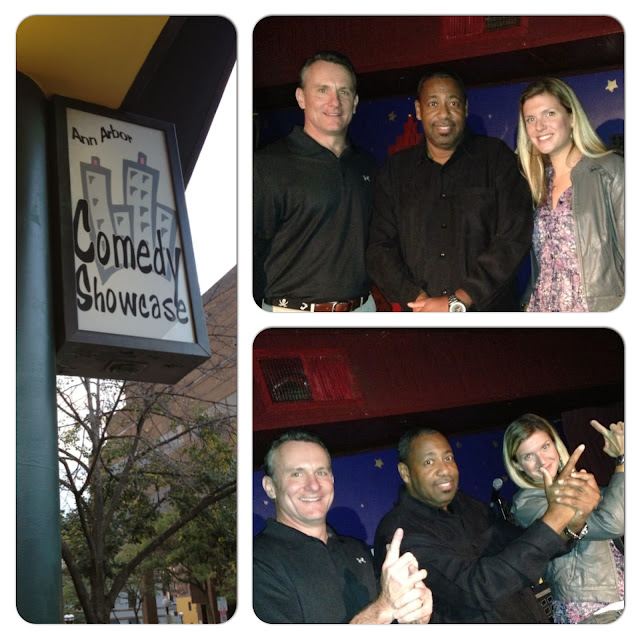 On Sunday, I headed up to Grand Rapids to participate in the Walk for Farm Animals.  Not only did I get to see this adorable pig, but I also joined nearly 100 other activists to raise money for Farm Sanctuary.  If you haven't heard of Farm Sanctuary before, pop on over to their website (and while you're there, if you want to buy me a logo hoodie, I certainly wouldn't mind).  Their work is nothing short of incredible!

The walk took place during Art Prize, so we took full advantage of the captive audience and leafleted our little hearts out.  Overall, the walk was pretty easy (especially when compared to my half marathon the week before), and we managed to beat the rain  And best part?  We only got heckled once.  Way to not be rude (at least for the most part), western Michigan! 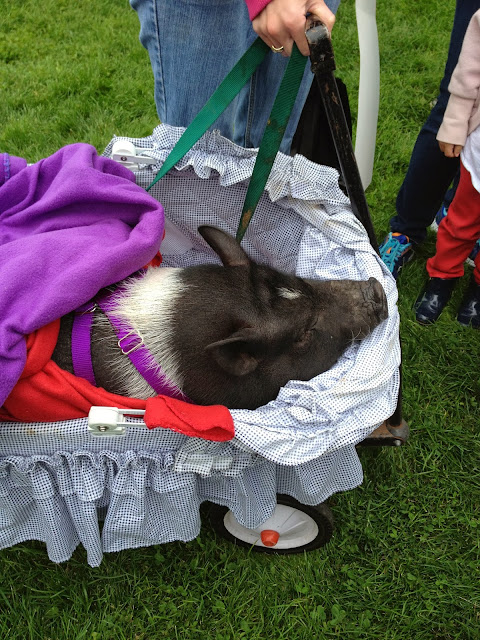 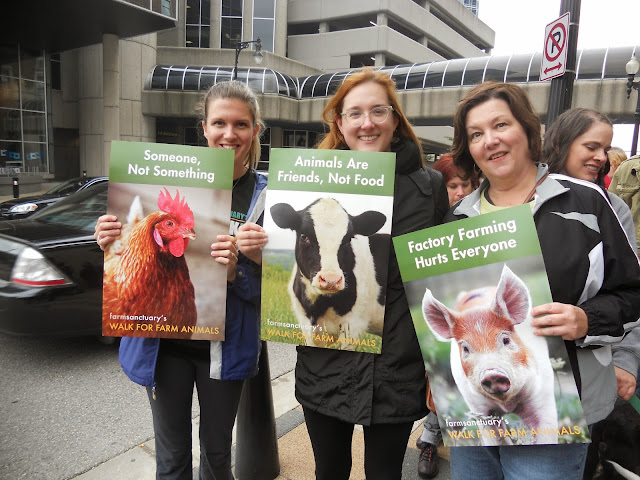 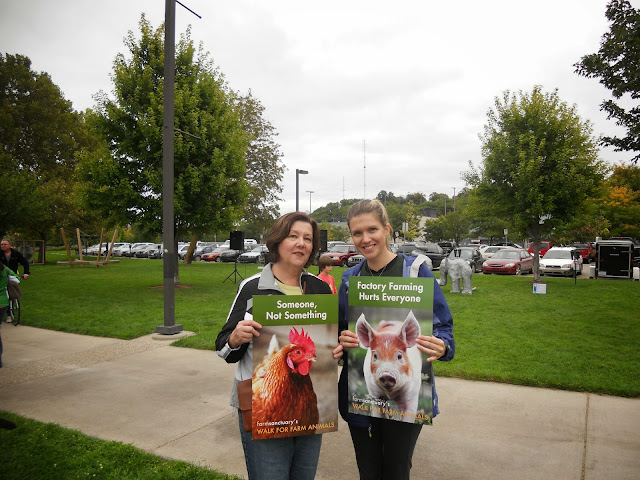 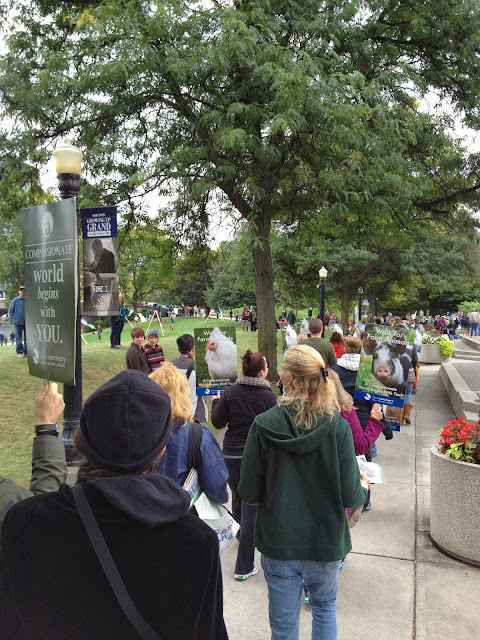 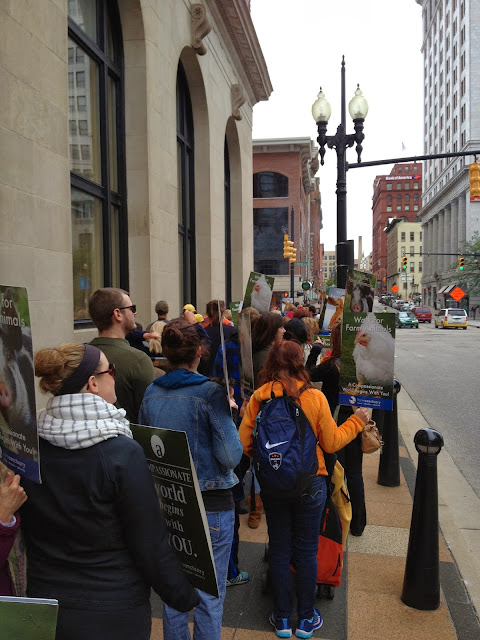 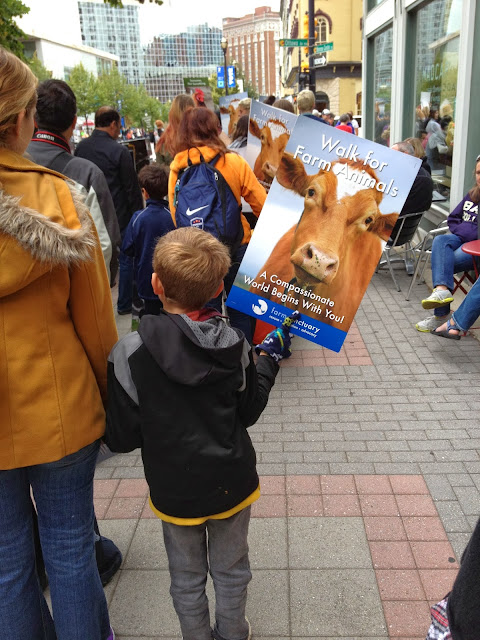 Posted by Kate Brindle at 1:56 PM No comments:

Telling jokes, raising money, and running like the wind (or a very slow breeze)

This weekend was definitely a special one.  Not only did I get to perform with some fantastic women on a benefit show, but I also completed my second half marathon!

On Saturday, I did a show to raise money for the Michigan Animal Adoption Network. It was the first time I got to try out my animal attorney jokes, and they went over really well!  Not sure when I'll ever bust them out again, but it was good to get them out.   I performed with some awesome women: Leslie Ann Thompson, MaryAnn DeMoss and Laura Witkowski.  And, as an added bonus, my good friends Angie and Kellie stopped by the show. 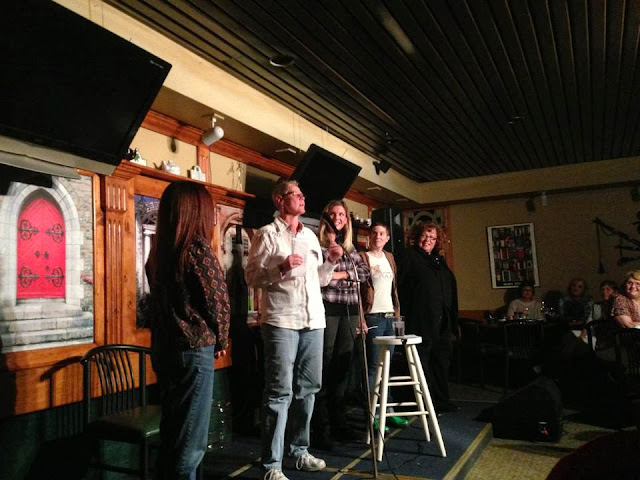 After the show, I drove back home and got a few hours of sleep before heading out to do the Capital City River Run Half Marathon.  When I signed up for the race, I made a concrete training plan that supposedly would make running 13.1 miles feel as easy as crossing the street.  Too bad being a full-time law student got in the way.

Not only did I not stick to my training plan, but I only ran once a week for the past month or so, and none of those runs was over 4 miles.

So, on Sunday, I decided to pack my bus pass along with my gels and Swedish fish.  I figured I would run until I got tired and then take the bus home. I mean, it wasn't like I was going to win the thing, so they not just have fun and enjoy the free t-shirt?

Speaking of which, here she is: 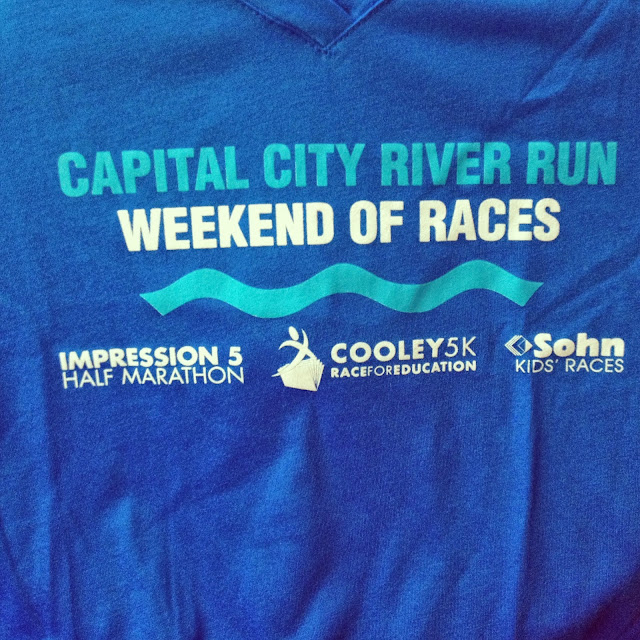 I started off with the twelve minute mile group and felt pretty good for the first couple of miles.  Then, I had to pee.  Bad.  So I left the group and waited in the line at the port-a-potty. I made a feeble attempt at catching up with my group, but to no avail.

So I decided to run my own race.  I'd walk when I needed to, take in the scenery (the course was along the river) and blast New Kids on the Block through my headphones (per usual).

To my surprise, I felt great until mile nine.  After that, I hit the wall runners always speak of, and by mile ten, I was ready for the race to be over.  But, by that point, I figured I might as well finish.  What's another three, if I had already made it ten?  Plus, my bus pass was so covered in sweat that I'd be too embarrassed to use it.

My legs and stomach cramped pretty bad, but somehow, I pushed through. When I spotted the finish line, I could not stop smiling (that and because I was listening to New Kids).

That's one of the things I love about running: it makes you push yourself to places you never thought you'd be able to go.  And when you finally reach them, the feeling is overwhelming!

After crossing the finish line, I practically limped to my car, treated myself to some Taco Bell and a nap (not at the same time) and studied the rest of the night.

As much as running 13.1 miles hurts, it's still a lot more fun than homework.

And now, onto the pictures: 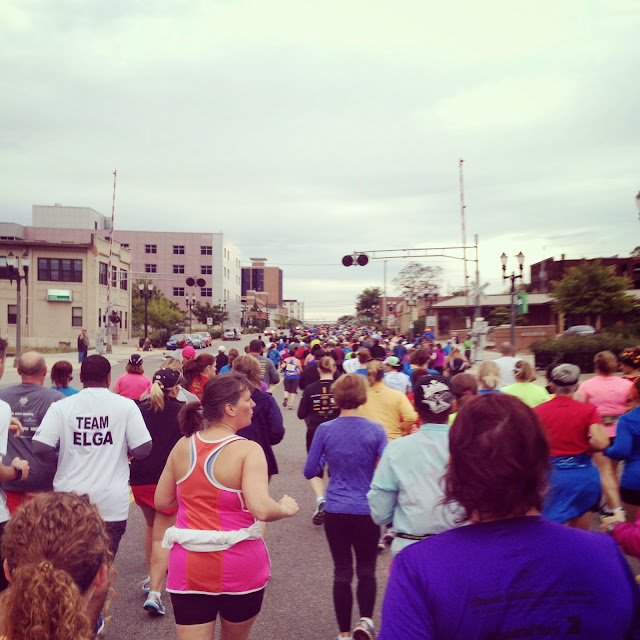 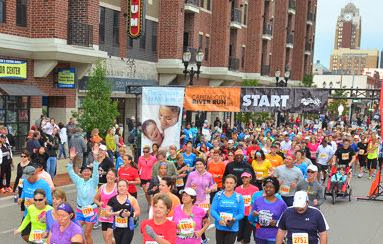 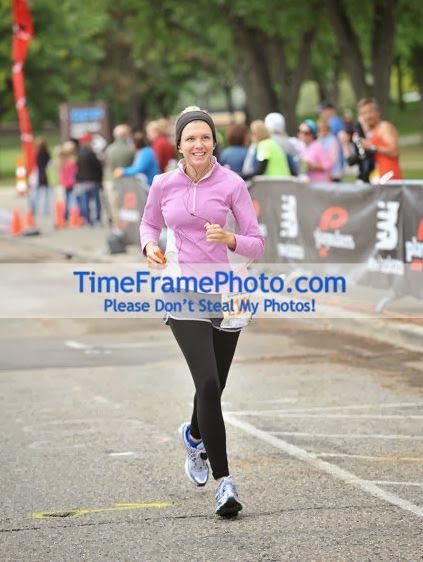 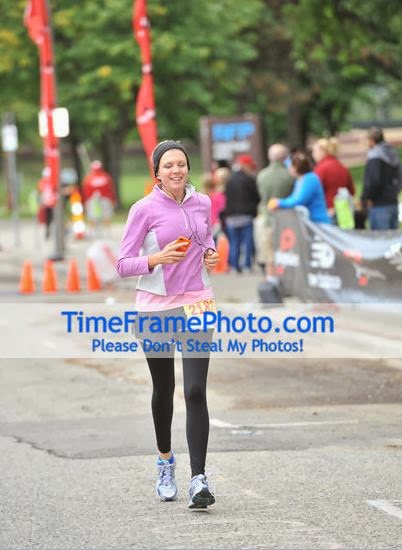 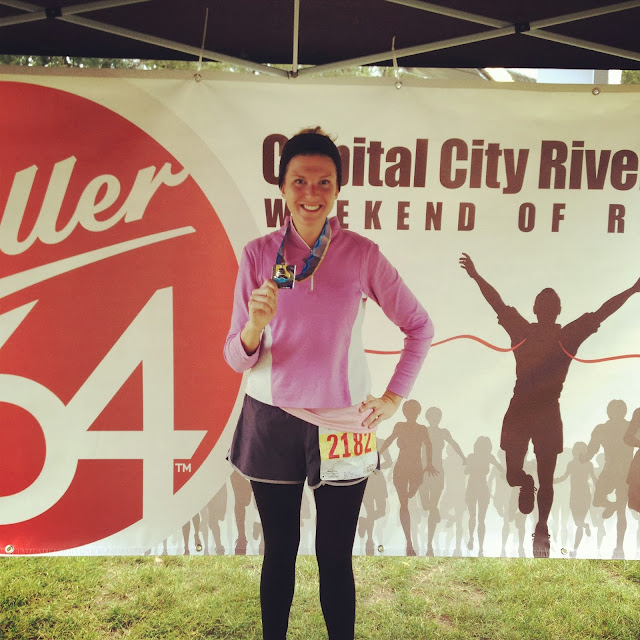 I'm blaming my slow time on stopping to pose for pictures like this along the course: 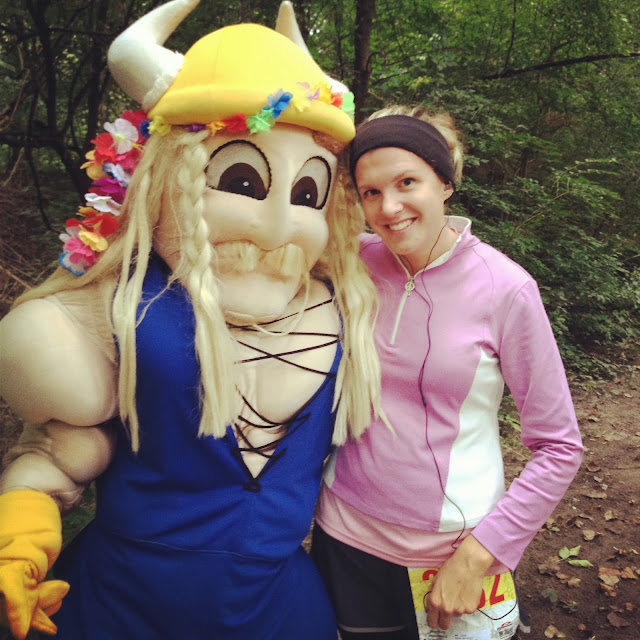 Posted by Kate Brindle at 5:32 PM No comments: 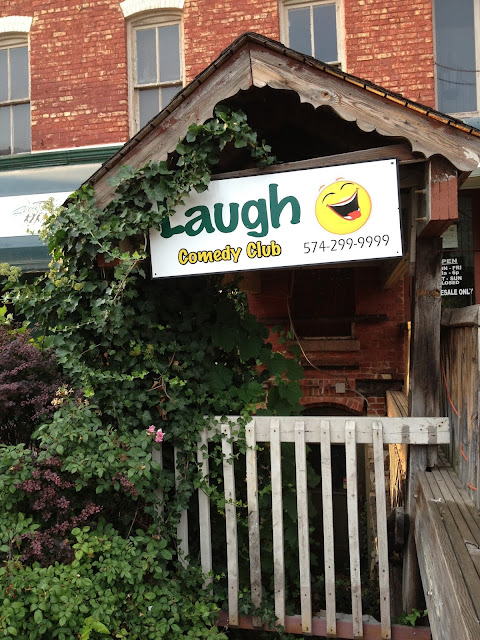 I took a break from cursing doing homework to head down to Laugh Comedy Club in Mishawaka, Indiana this weekend.  I performed on an all-women's show that featured several hilarious ladies!  Not only were they super funny, but they were all incredibly nice. It's rare to work with fellow estrogen-producers, so whenever I do, it's a real treat.  Plus, the staff was really nice and awesome! 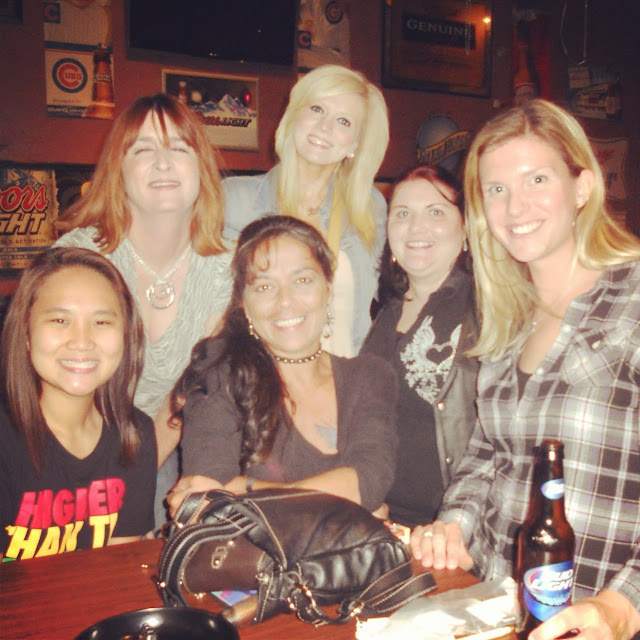 Other than the residents all seeming to hate Ann Arbor (more on that below), I totally fell in love with Mishawaka. 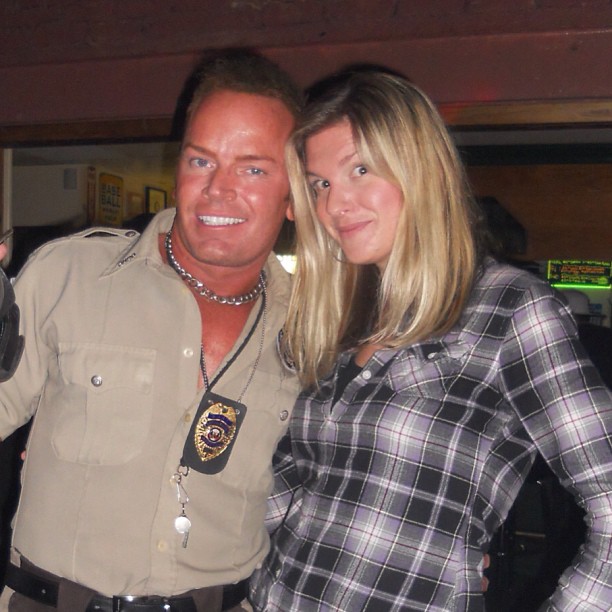 On Saturday, I even got to make friends with the law.  And by the law, I mean a male stripper. 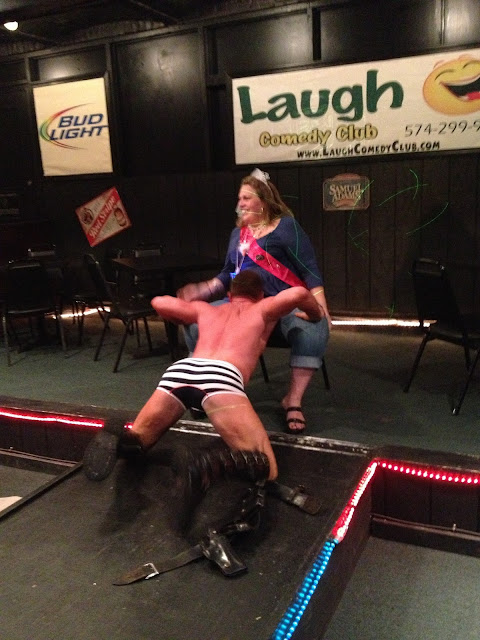 I'm pretty glad none of the cops I've been pulled over by do this.

After our shows, we headed over to watch Full Circle play at the bar across the street.  If you haven't seen them before, and you live anywhere near Northern Indiana, check them out!  I first met them when we shared the stage back in June.  I was totally impressed then, and I was so excited to see them again. 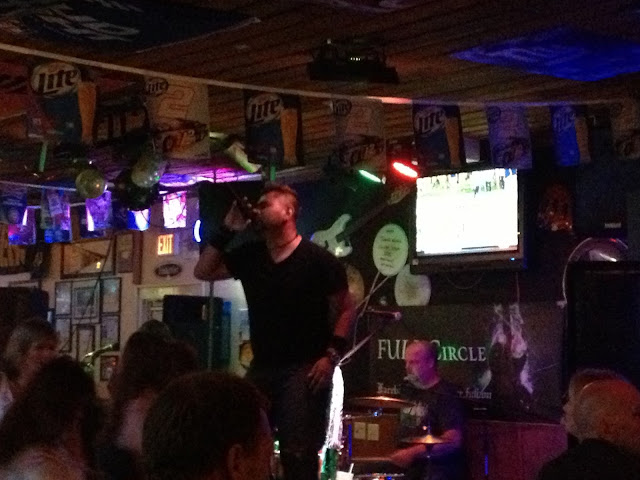 Before they took the stage, the bar broadcast the Michigan/Notre Dame football game.  Such hostility!  Yowsa! 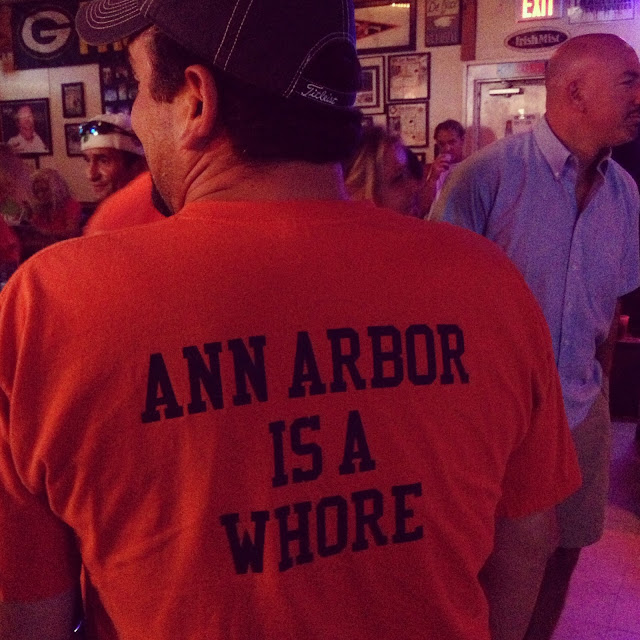 In fairness, they do take football very seriously: 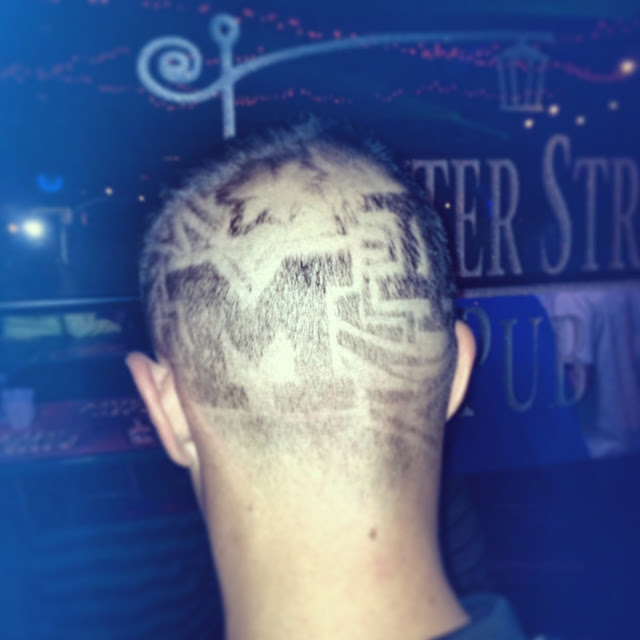 And now I'm home and back to cursing doing homework.
Posted by Kate Brindle at 4:05 PM No comments: