On Saturday, February 18, 2012, I had a chance to perform at the Brew Ha Ha in Saginaw, Michigan. Not only did it take place in a 2200-seat theatre (by far, the largest crowd I've ever performed in front of), but it also featured microbrews from all over Michigan. Plus, I got to work with some really awesome (not to mention nice) fellow comics. 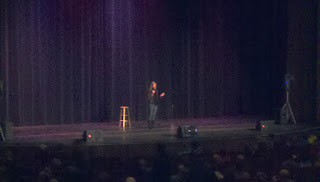 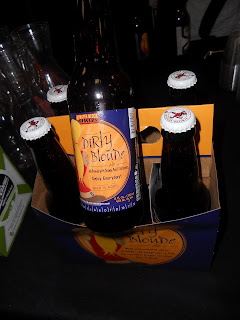 Dirty blondes are delicious...and the beer isn't half bad either. Heyyyy-oooo! 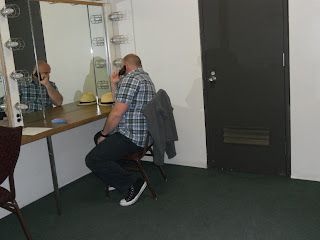 David Dyer pre-show, unaware that he was modeling our fancy dressing rooms (when I snuck up and took a stealthy shot). 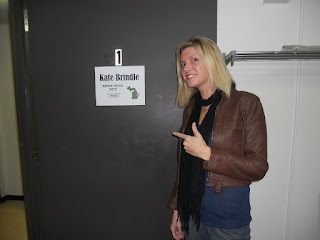 Love, love, LOVED having my own dressing room, complete with private bathroom (especially since the beer was free and flowing). 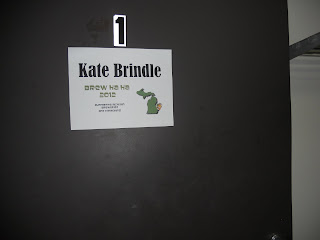 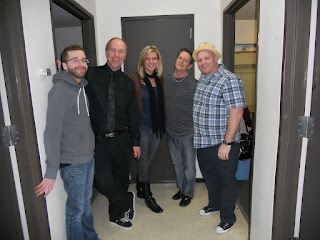 Backstage.
Posted by Kate Brindle at 7:33 AM No comments:

The day after the puppet show (and a fun one-nighter in Michigan, that I, unfortunately, did not get any pictures of...I did get a really cool soy candle from an audience member though), the main squeeze and I decided to go cross country skiing. And by cross country skiing, I mean we attempted to not fall down while having weird, plank-like devices attached to our feet. As you can see, we weren't all that successful: 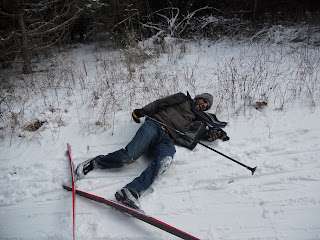 Some more pictures of our adventure: 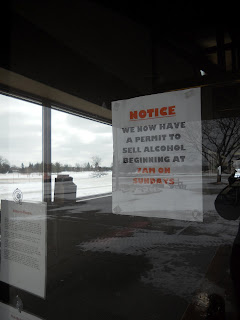 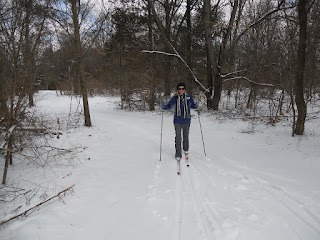 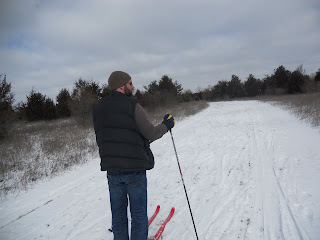 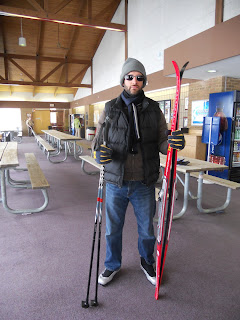 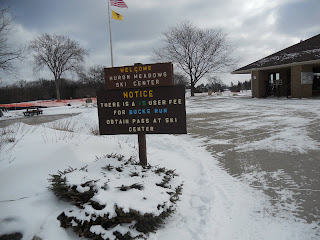 After acquiring several bruises from falling down, we then indulged in some yummy deliciousness from Whole Foods: 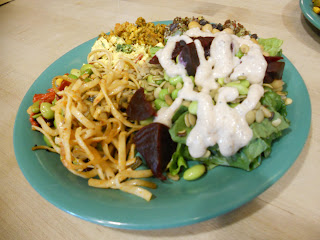 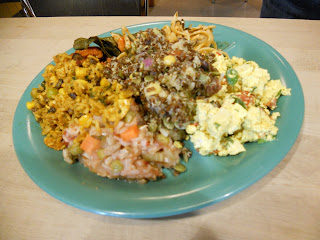 And then headed out to the Dirty Show. 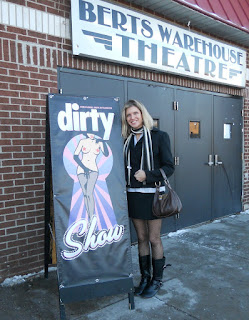 I also reviewed the show for ZoiksOnline, which you can read here.
Posted by Kate Brindle at 6:55 AM No comments:

On Saturday, I was asked to perform at my first show for children. Because most of my jokes involve not-so-children-friendly material (my act isn't dirty, it's just that I don't think kids really appreciate the true comic genius of Jägermeister jokes), I was excited about the challenge. As the performance date drew closer, I began to get more and more nervous. In fact, I even told myself that I was counting the show as a success if nobody cried (both the children and me).

The show ended up being really fun! Angela Madden put the show together, and I worked with Chris Young, Mike O'Keefe and Khurum Sheikh. The best part? After we each did our sets, we got to play with puppets and do an impromptu puppet show. 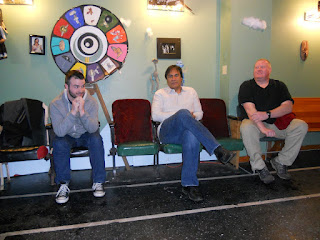 Contemplating some last minute act clean-ups before the children arrive.

The Dreamland Theatre, in Ypsilanti, Michigan, where the show took place, was so cool. It's this quaint little place that's mostly used for marionette shows. Here are some shots of the various puppets and sites around the theatre: 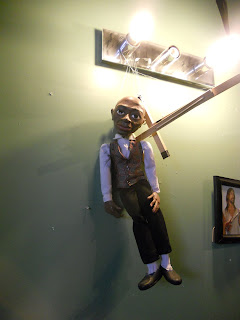 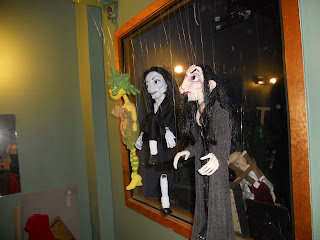 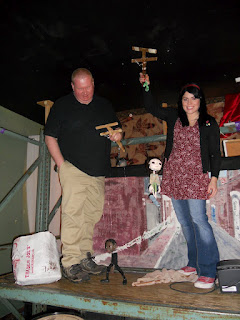 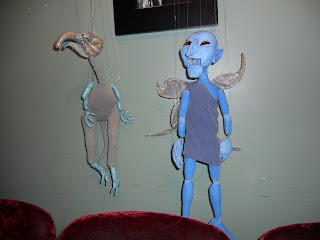 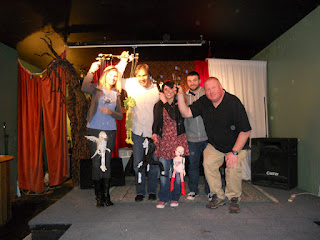 First-time puppeteers.
Posted by Kate Brindle at 8:52 PM No comments: 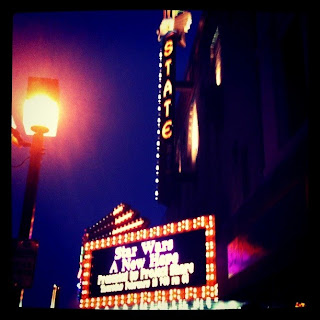 I performed at the State Theatre in Bay City, Michigan last night was Norm Stulz and Steve Lind. The show was absolutely fantastic! Steve and Norm are both so funny, and the crowd was on fire! Wow, what a difference it makes to perform in a place other than a bar with five people in the crowd.

The drives there and back were absolutely brutal! 20 mph in a blizzard anyone? I seriously started to wonder how many foursquare points I'd get for a check-in in the ditch. But the show made risking totally my car so worth it.

Now, off to my show for children at the Dreamland Theatre in Ypsilanti, Michigan. It's times like these that I really, REALLY wish I knew how to make balloon animals.
Posted by Kate Brindle at 10:09 AM No comments:

I had several Midwestern dates during the past couple weeks (and by dates, I mean comedy shows, not, like, awkward match.com meet-ups at Starbucks). Because that's how I roll, y'all, I play Wisconsin in the winter and the south in the summer. Fantastic routing, no?

Actually, I was really excited to be home. Except for a quick stop by Wisconsin (and by quick, I mean an 8 hour drive each way), I spent two weeks in Michigan.

I performed at Eastern Michigan University (my grad school alma mater) with Steve Sabo, who is apparently "hillarious" as evidenced by the poster below (I had no idea he was filled with peaks, but I guess so).

And I even got to perform at the club where I started, the Ann Arbor Comedy Showcase.

Hanging with Mike Evitts, Dwayne Gill and Ricarlo Flanagan after the benefit show we did for Planned Parenthood at the Showcase.

That show marked the first time I was given condoms as a post-show thank you present. Also included was wine...to inspire activities that involve said condom usage.

I'll leave you with some shots from my trip to Wisconsin. In addition to bowling alleys, high school proms, and Christmas parties, I can now say I've performed in a barn (cross that off the ol' bucket list).

Here was the hotel where I stayed.

From the outside, it doesn't look like much, but it was so cute! I had the cowboy themed room. Somebody had been watching some serious Martha Stewart as the entire place was COVERED in Western crafts. I was afraid to blow-dry my hair for fear that I might get carried away with the round brush and knock down one of the papier-mâché boots.

Despite the cold and snow making me curse every time I step outside, it still feels nice to be in a place where people understand if you order a pop.
Posted by Kate Brindle at 7:09 AM No comments:

Question: is it possible for me to be any more excited

Answer: I think not.
Posted by Kate Brindle at 11:29 AM No comments: