The marathon that wasn't 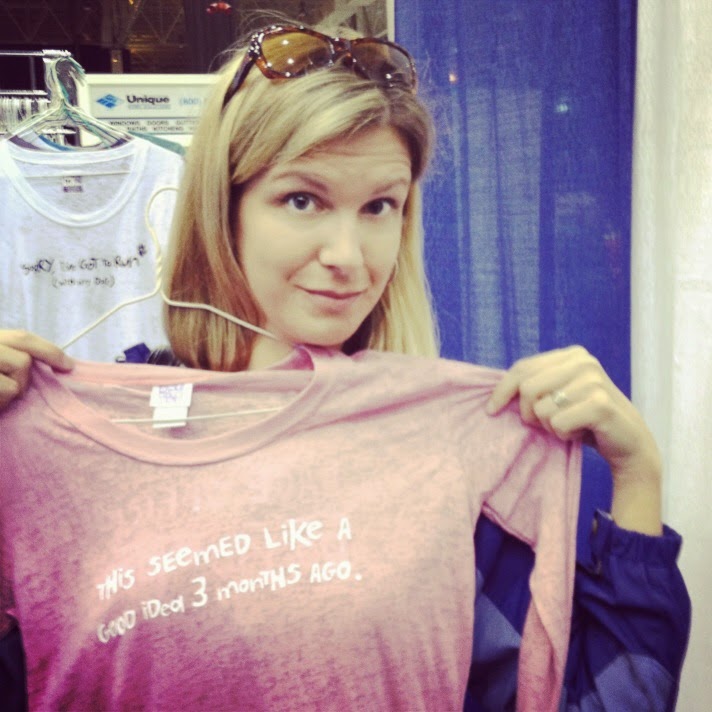 So, this weekend was supposed to be my first marathon.

After completing my first half marathon, I was so thrilled and energized, that I immediately looked for a marathon to run. Sure, I was in pain from 13.1 miles, but, I had a killer runner's high that compelled me to hand over my credit card information and sign up for 26.2 miles in Cleveland.

I remember thinking that training for a marathon would be an awesome way to relieve the inevitable stress that was sure to follow from law school. I researched training plans, read tons of articles, and eagerly awaited training for something that had been on my bucket list for as long as I can remember.

I gave myself six months to train.  For the first couple months, the training was great. I felt strong, and running on the treadmill was an awesome excuse to blast boy band music.

But, then, not just the stress, but the reality of law school hit. I had never done so much work in my life. And between schoolwork, comedy, working, interning, and being involved in various student organizations (not to mention still trying to prepare food for myself and shower every once and a while), I was averaging about 4-5 hours of sleep per night. That amount of sleep isn't really conducive to remembering your own name, let alone training for serious distance running.

So I did something I never thought I'd do: I decided to give up.

And it felt wonderful!

You see, I'm a bit of a perfectionist (and by "a bit," I mean it's practically my middle name), and I pride myself on not quitting when I set my mind to do something.

But, I had to listen to my body. And when I did, I felt so much better!

By the end of my first year at MSU, I was so stressed, so tired, and so out-of-shape, that I still decided to go to Cleveland, but I switched to the 10K instead.  Rather than pushing myself too hard and taking what would probably be a huge risk with my health, I figured, since I still had the hotel room, still paid the entrance fee, I'd still journey down there and just relax. Well, if you could waking up at 4 am to sweat as relaxing. 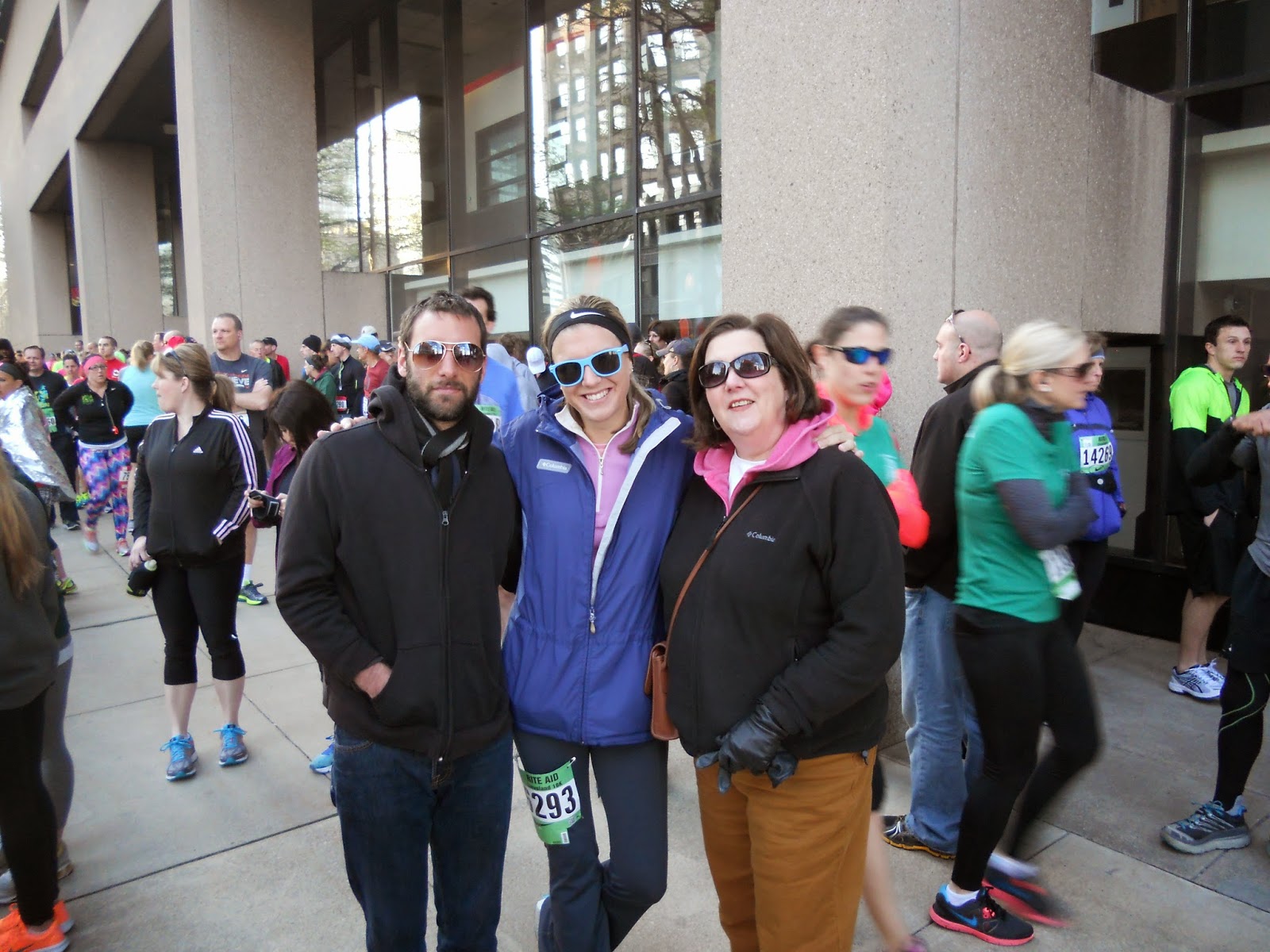 I was so thankful that my mom and Drew still agreed to go with me. They're incredibly supportive, and they were there to cheer me on and tell me how proud they were of me (even if 26.2 miles became 6.2 miles). They let me drag them to the expo (where I may or may not have forced them to play carnival-esque games), and they made the drive so much fun! They also helped me polish off some pretty amazing falafel that we found near our hotel (well, I should say, we found a restaurant that served falafel; we didn't just pick up some deep-fried chick pea balls from the street and start chowing down). 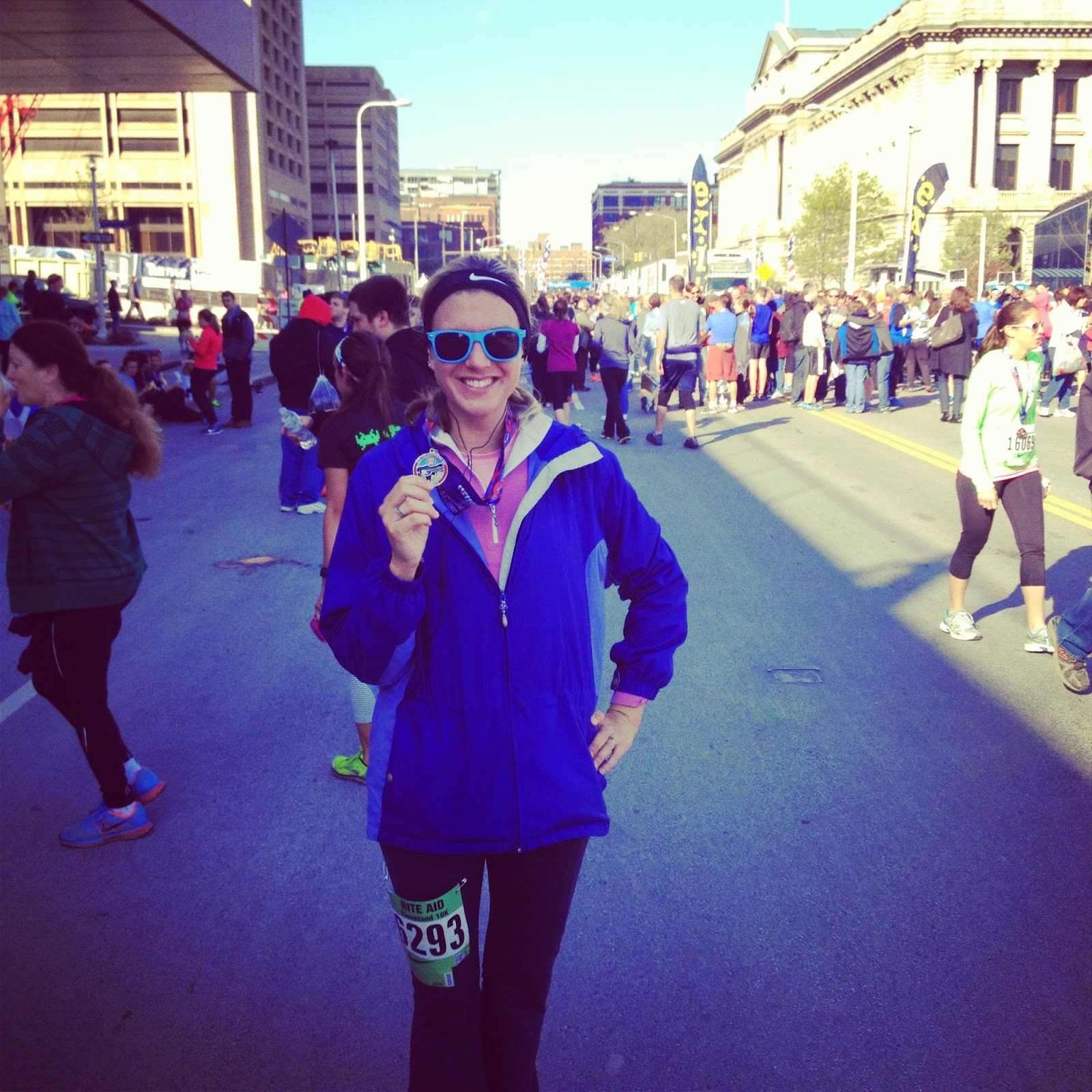 I still got to take this shiny lil' guy home.

One day I will run a marathon. Today was not that day. And I can honestly say that I'm okay with that. Running long distances feels good, but listening to yourself feels pretty good, too.

Oh yeah, and not having killer blisters and feeling like I'm going to collapse = also pretty amazing!

Posted by Kate Brindle at 6:42 AM No comments:

After finals, I took a trip to Nicaragua for a week of relaxation. My mantra for the week: beach, beer, repeat.

When I went to Nicaragua last year, I had a wonderful time. I loved going to museums, learning about its history (P.S. It's not quite what we're taught in U.S. schools. For a more accurate account, check this book out), and exploring different cities. As soon as I got home, I vowed to return.

This time, I headed to San Juan Del Sur, a tiny beach community that has recently exploded with tourism.  I posted most of my pictures on facebook (which can be found here), but I'll share a few here as well.

But, if you learn to beat the system (like the time I wore a backpack under my coat so I wouldn't have to pay for a carry-on; I don't know that scoliosis has ever been shaped like a Jansport, but nobody said anything, and I saved myself $35), Spirit can get you a lot of cool places on the cheap. 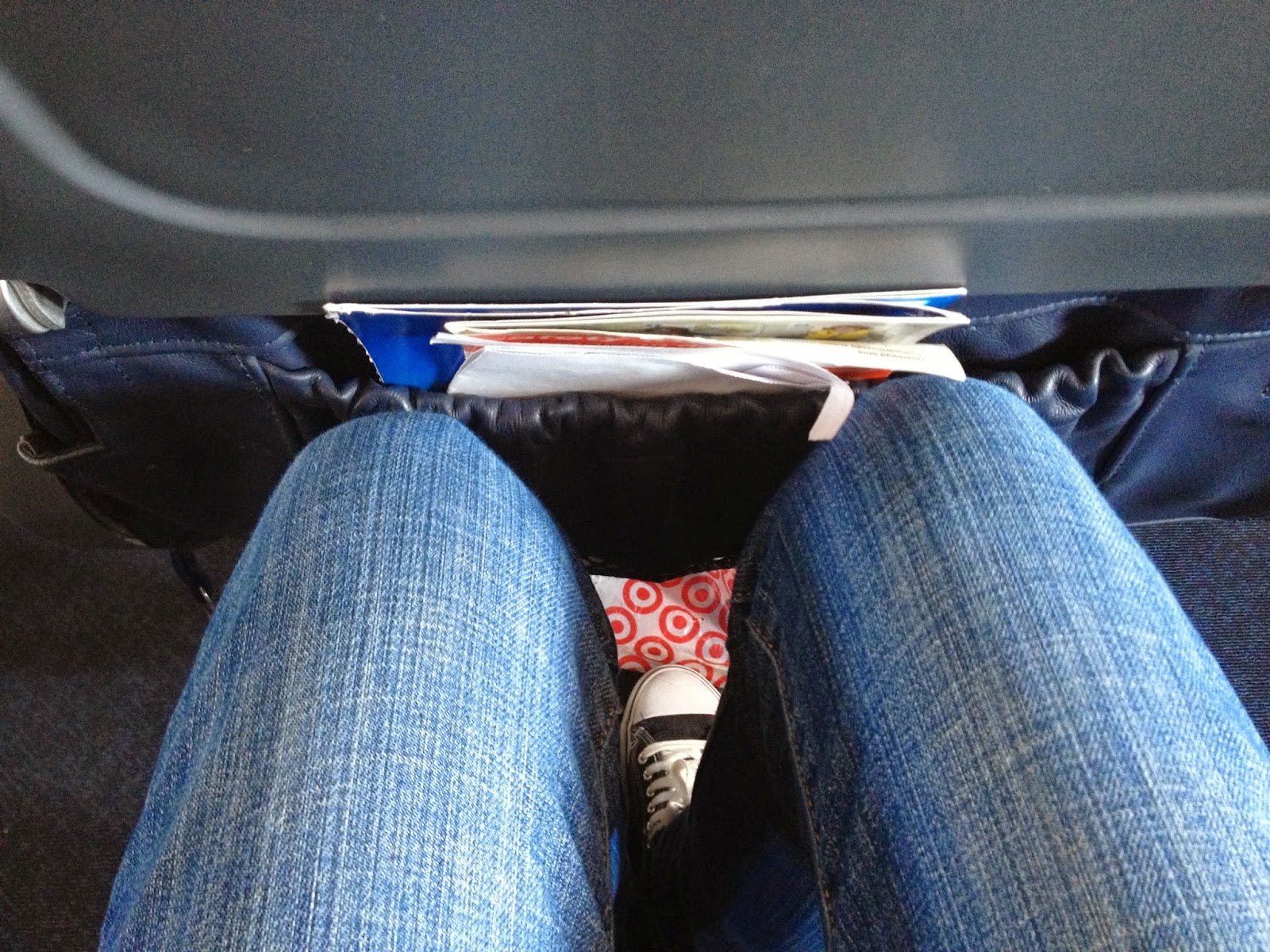 Not exactly a lot of leg room, but how can you argue with free?

After arriving in the middle of the night, like last year, we stayed in Managua for the night before heading out to San Juan Del Sur. 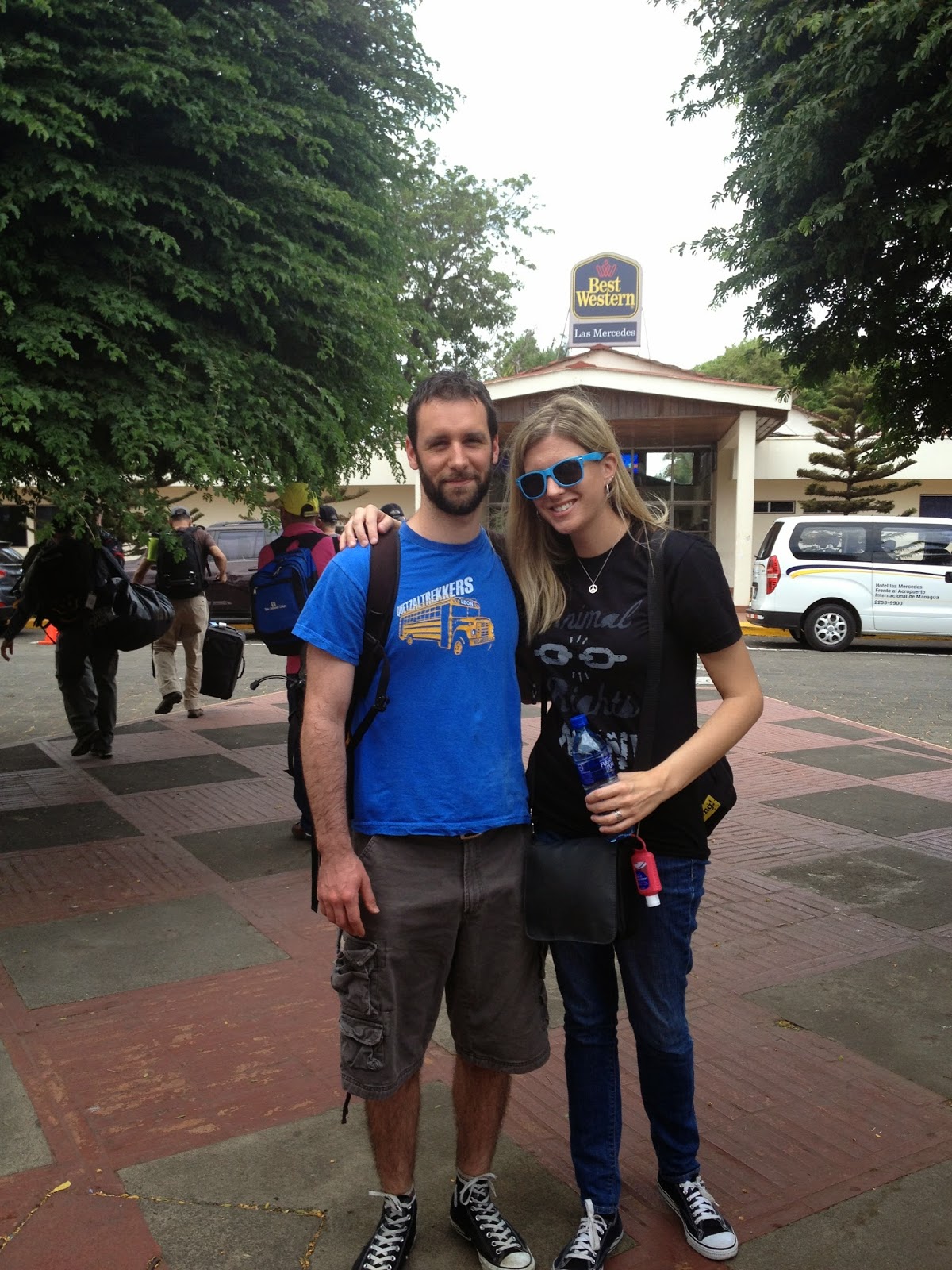 The cheapest mode of transportation offered on our last trip was 'micro-buses' (basically, a cross between a mini-van and a van that seats 15 people). However, this time around, we got to experience the chicken buses, which are old U.S. school buses that have been painted with bright colors and outfitted with stereo systems that are probably worth more than the buses themselves.

The ride was four hours long, and the bus was absolutely packed. We met a combination of locals and people from various parts of Europe. Of course, it's impossible not to get to know someone when you're sitting three to a seat and it's 95 degrees out with 1,000% humidity. In my younger days, I've been in quite a few situations where I had the opportunity to be sweat on by strangers (mostly at dance clubs where the men insisted on removing their shirts), and I can safely say, I'm still not a fan of it.

If I sound like I'm complaining, I'm not. It was, after all, an adventure. But, it definitely made the air-conditioning that we paid $18 per night extra for at our first hostel completely worth it.

This was the first place where we stayed, which we absolutely loved! 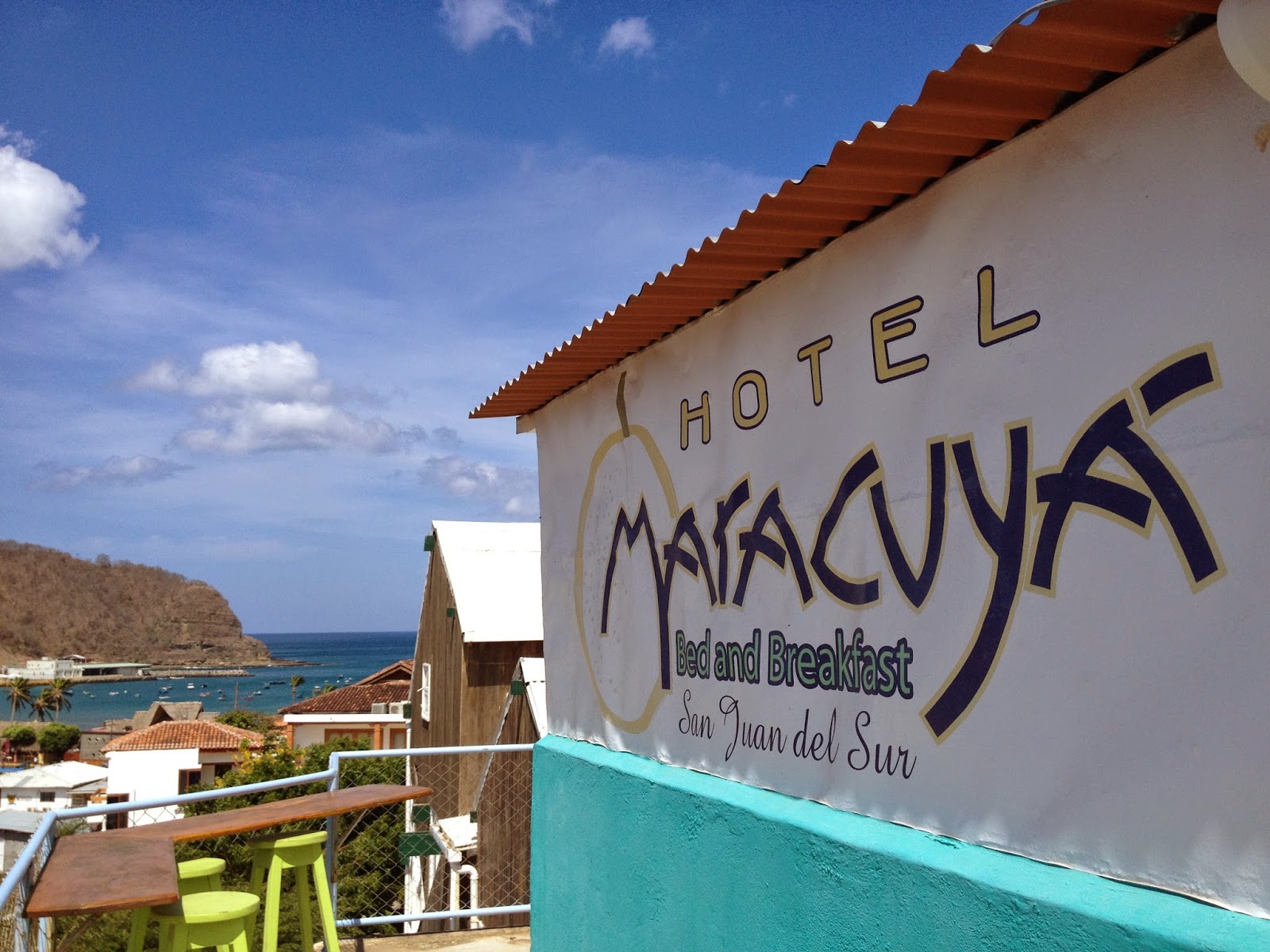 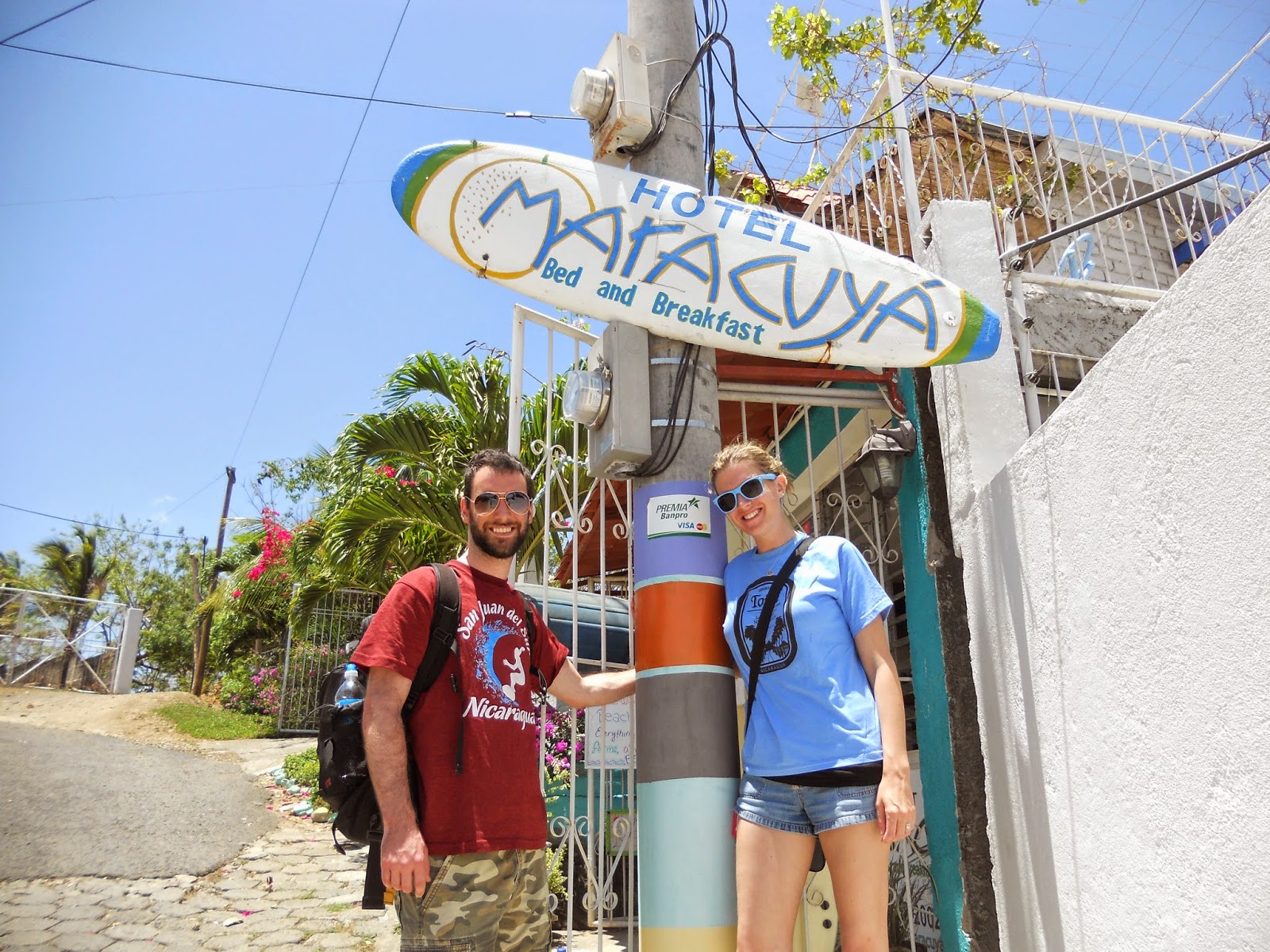 We ate breakfast outside every morning and got a chance to look at the beach before heading to it each day. 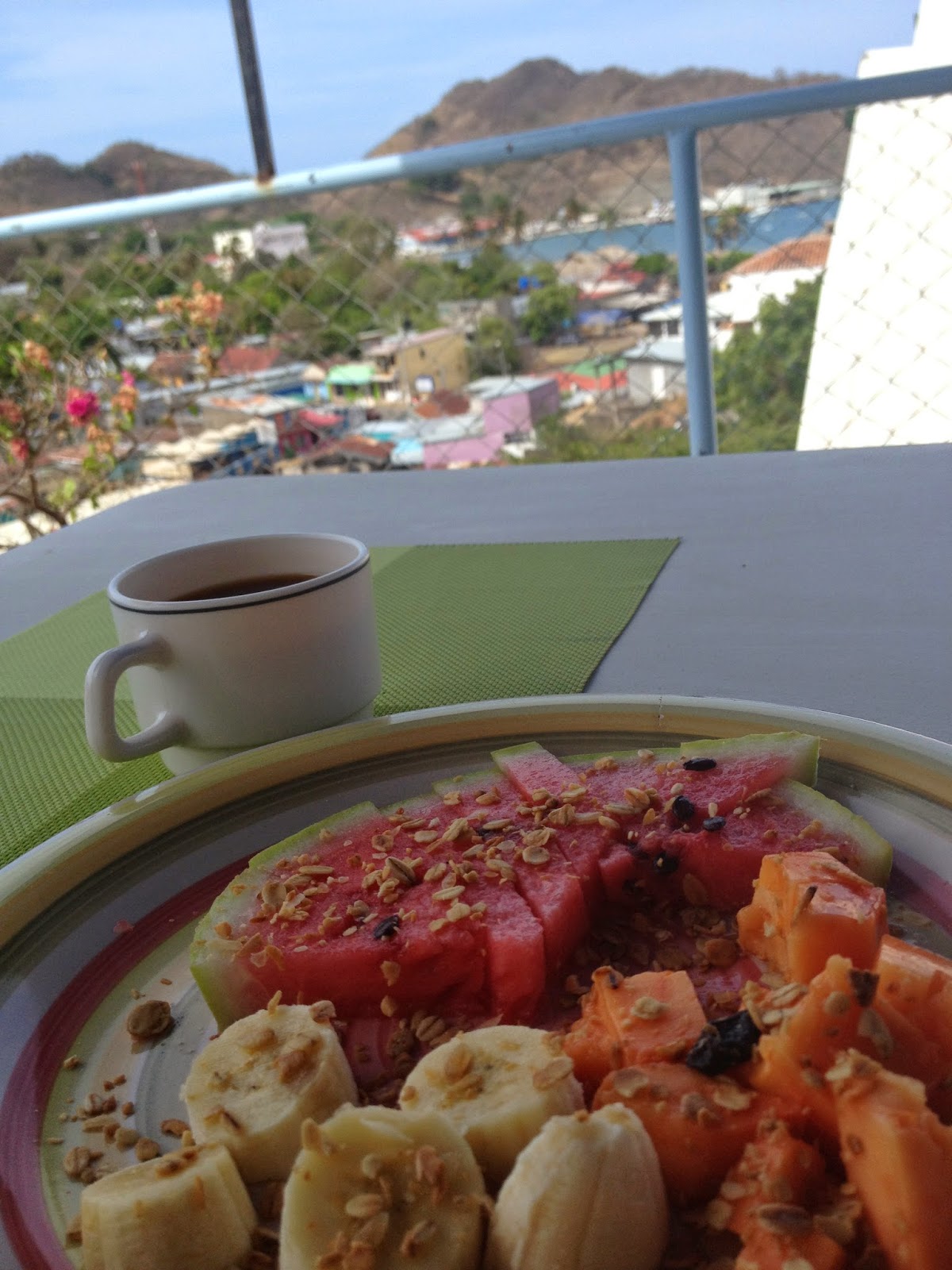 The next few days were a blur of beach, beer (what can I say? I'm true to my mantras), relaxation, and reading. 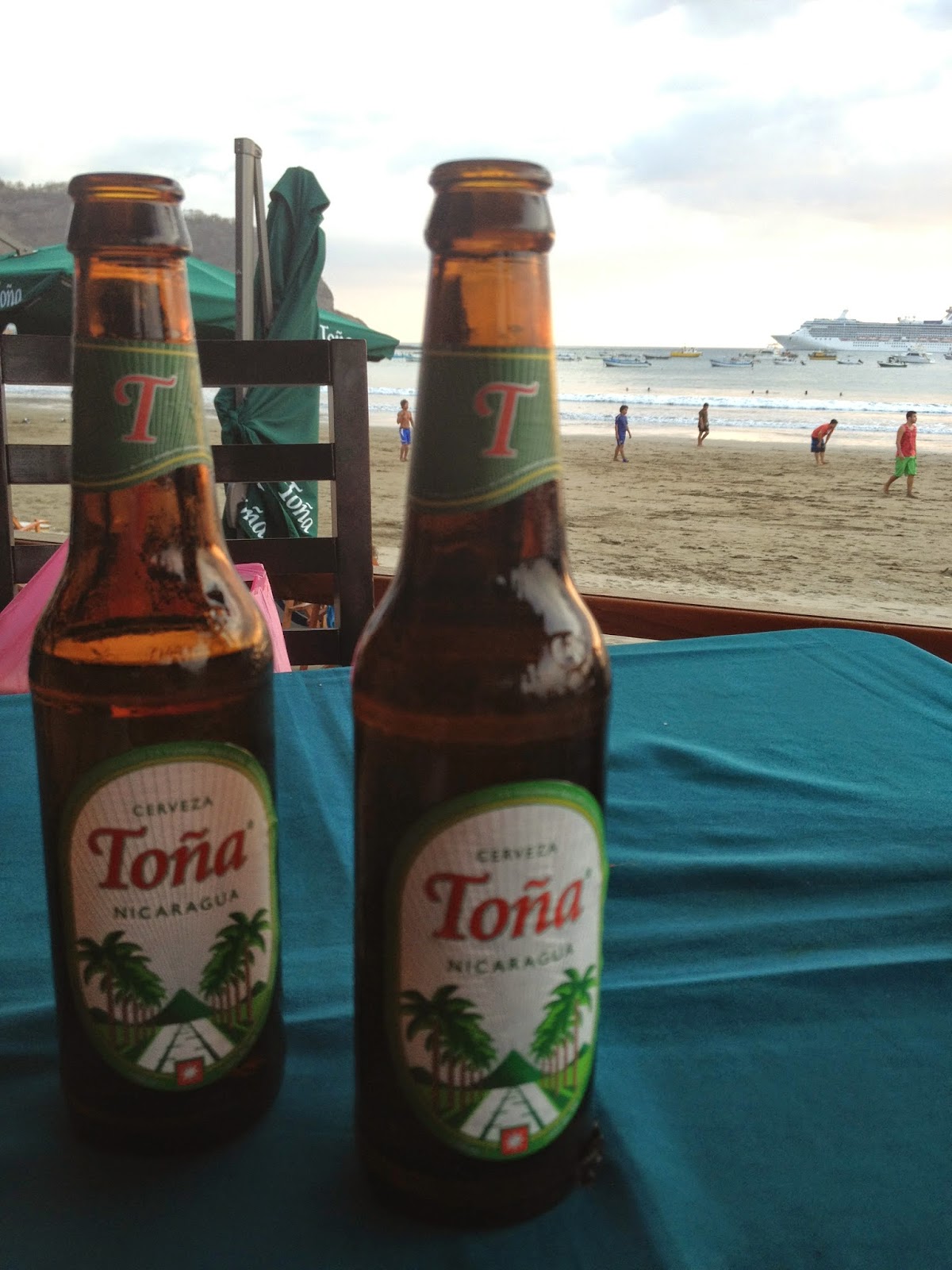 We also discovered an amazing raw vegan place and curry restaurant.  Neither were exactly authentic Nica cuisine, but they were delicious anyway. 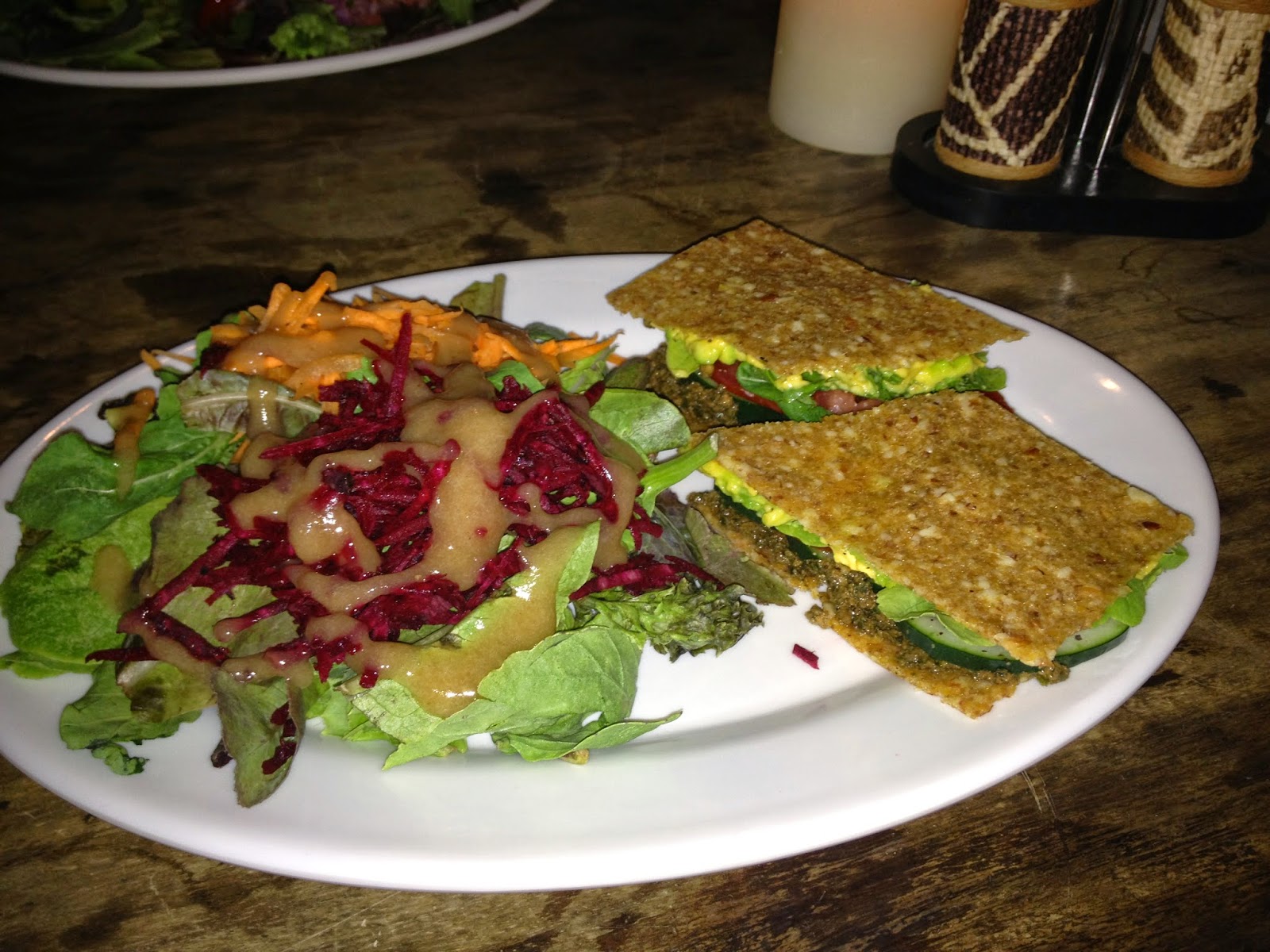 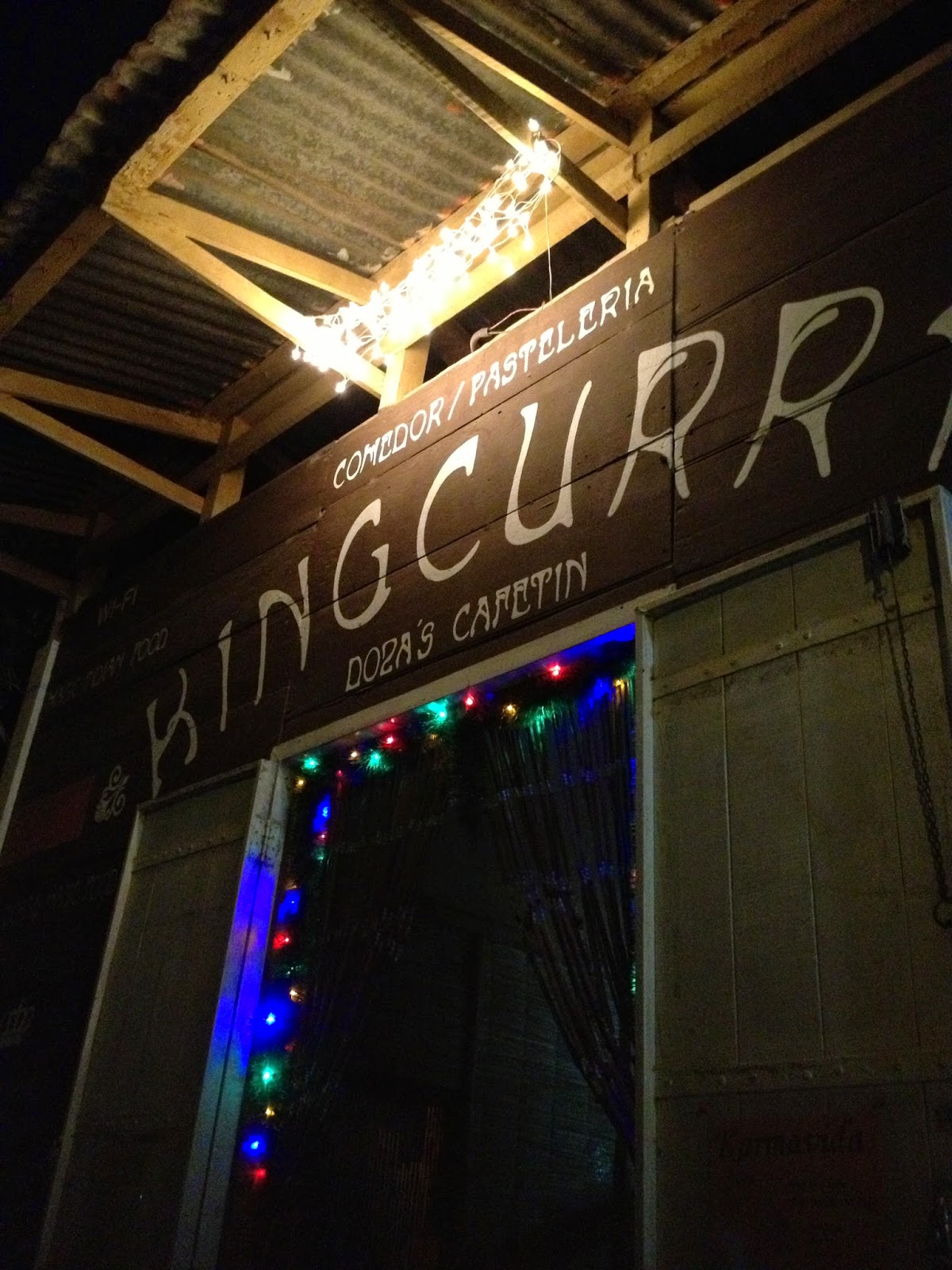 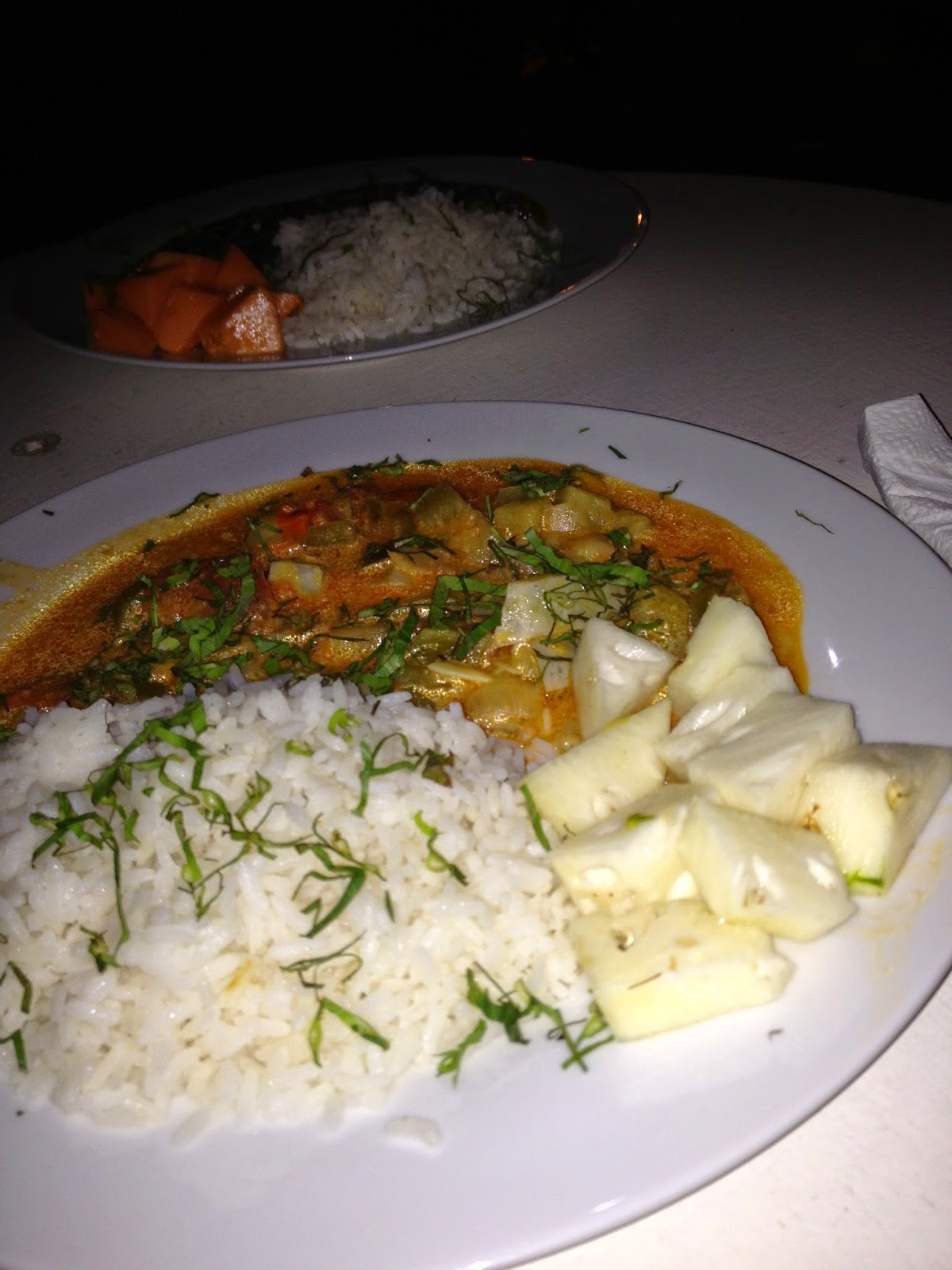 Despite loving our first place, we moved to another hostel mid-trip because it was cheaper. 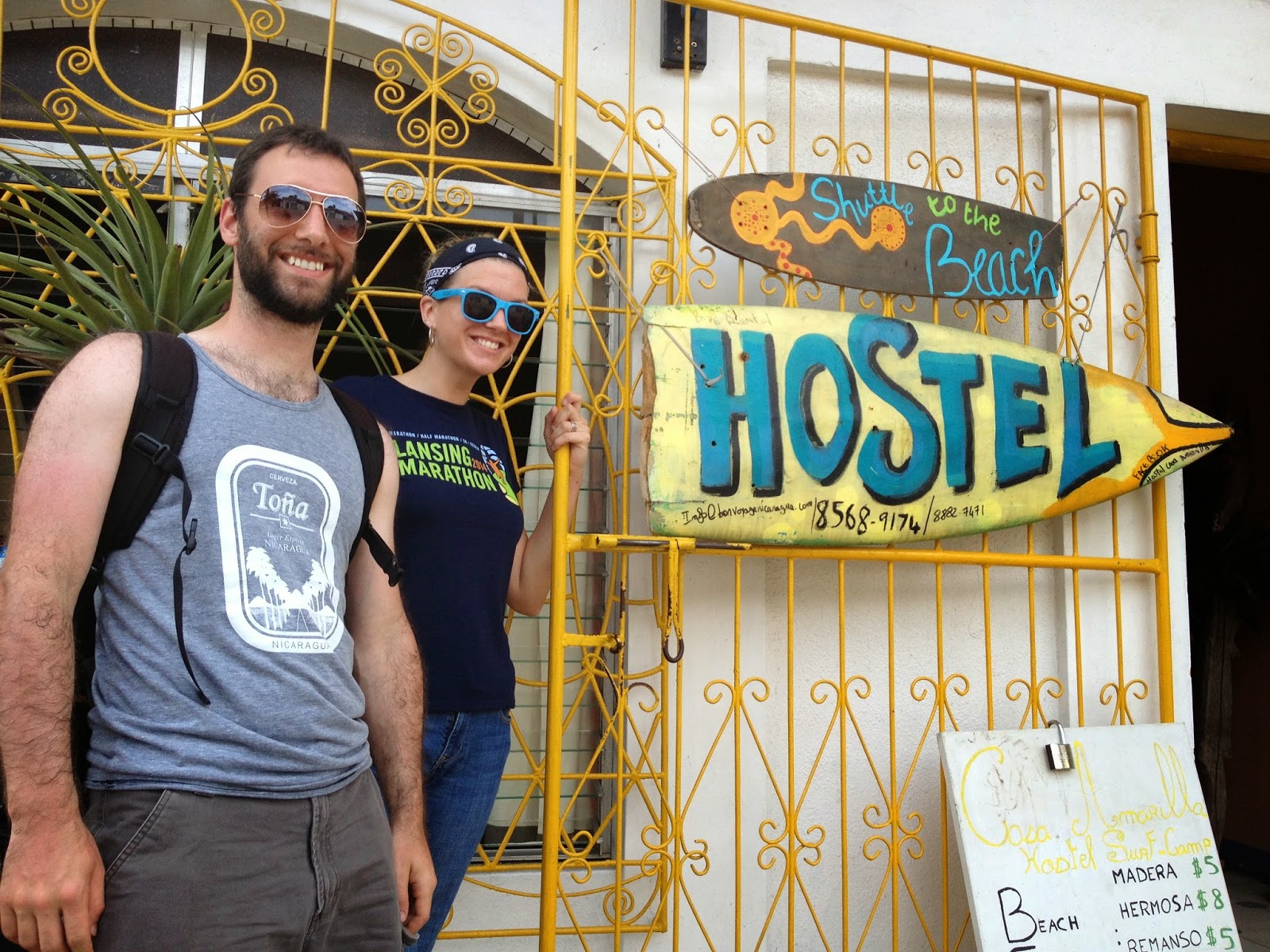 The new hostel was right near a surf shop so Drew took some surfing lessons, and did really well (he even got up his first time)! I didn't get any pictures, but I did make a little video of our trip that features him riding some waves.

On one of our last days, we discovered a nice little coffee shop and got a lot of reading done. 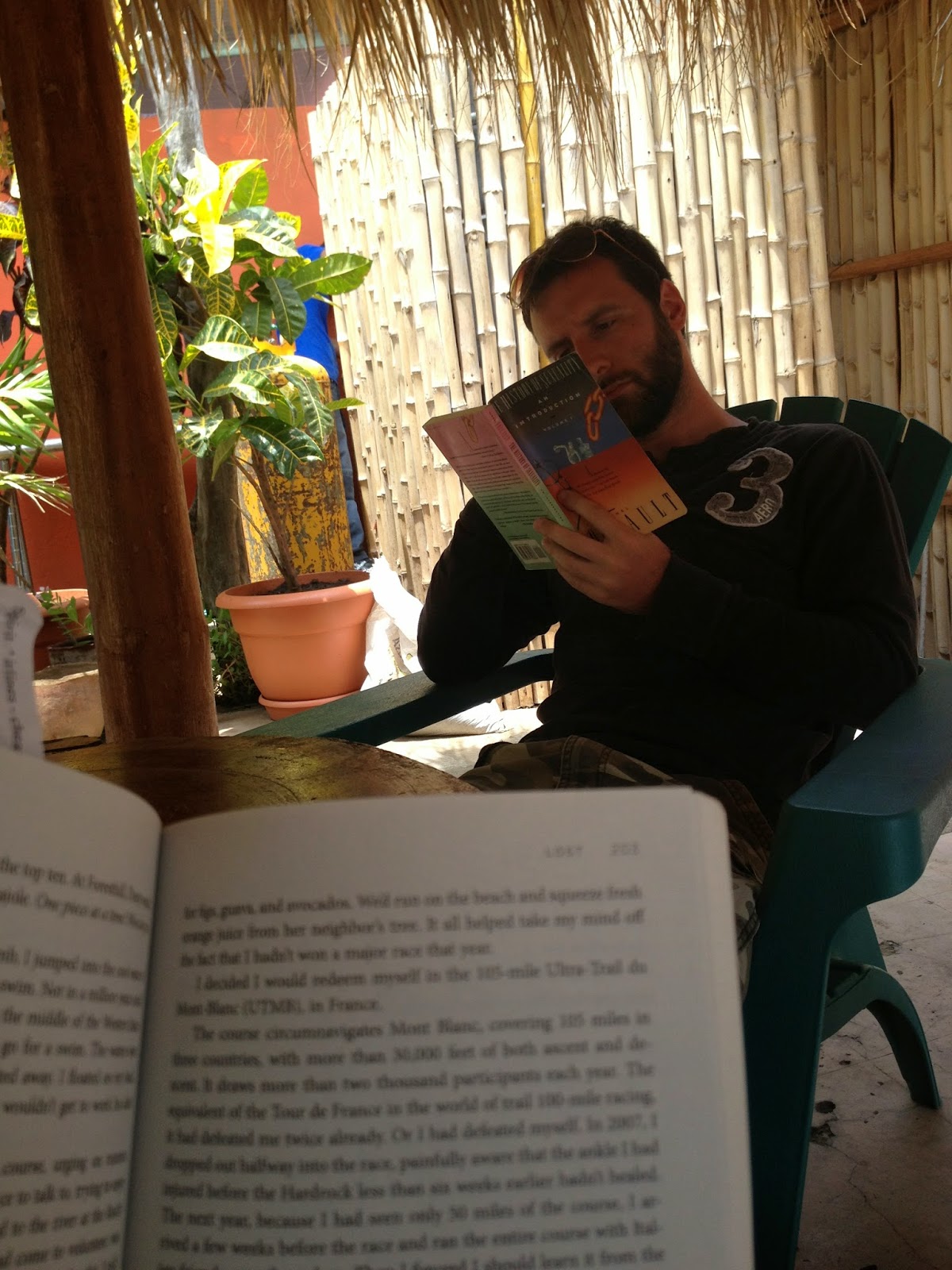 When we left after a week, I was actually kind of glad to go.  As strange as it may sound, beach and beer actually got somewhat boring after a while.  I suppose I got too used to always being on the go.  Plus, the fact that the water went out two days in a row (as I mentioned, San Juan Del Sur has boomed recently, and it seems the infrastructure hasn't quite caught up yet) made me rather excited to return to a flushing toilet again.

I also felt kind of old there. If getting ridiculously drunk is your thing, San Juan Del Sur is your place. They have these pub crawlish events, but instead of pubs, they take place in pools.  Everyone seemed to be raving about them! We were told that they were $50, but worth every penny because it was all-you-can-drink.

But, when I heard that, all I could think was, "why would I pay $50 to throw up the next morning?"

Yup, I'm officially old.  When I was 22, I probably would have thought that was heaven.  Now, heaven seems a lot more like Netflix and really good chocolate. Dear God, what is happening to me? If I start talking about wanting to purchase a pair of Crocs, please stage an intervention.

Despite not taking part in the pool crawl and being pretty ready to leave when we did, overall, we had a nice time and it was great to be able to get away from a lot of the stresses back at home. 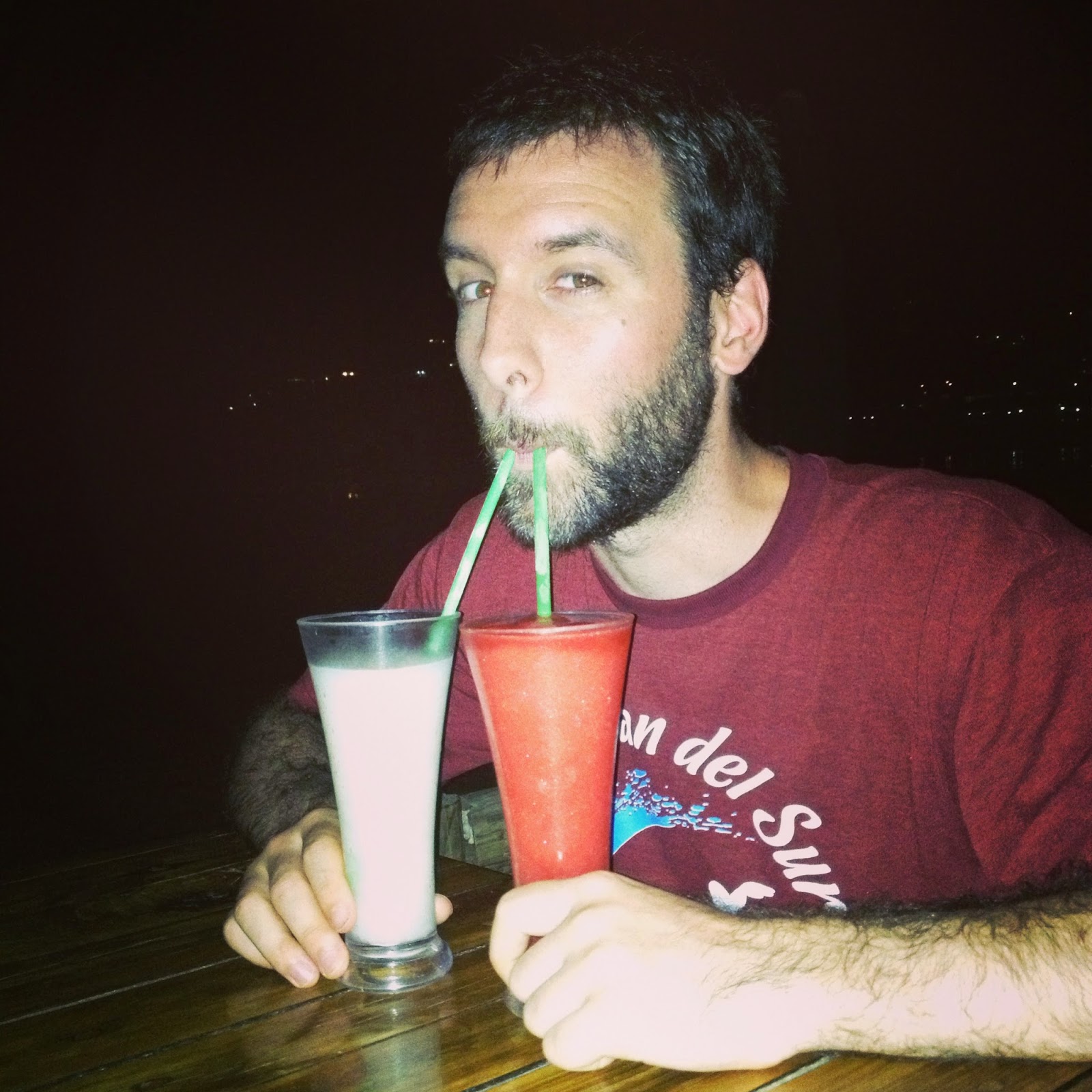 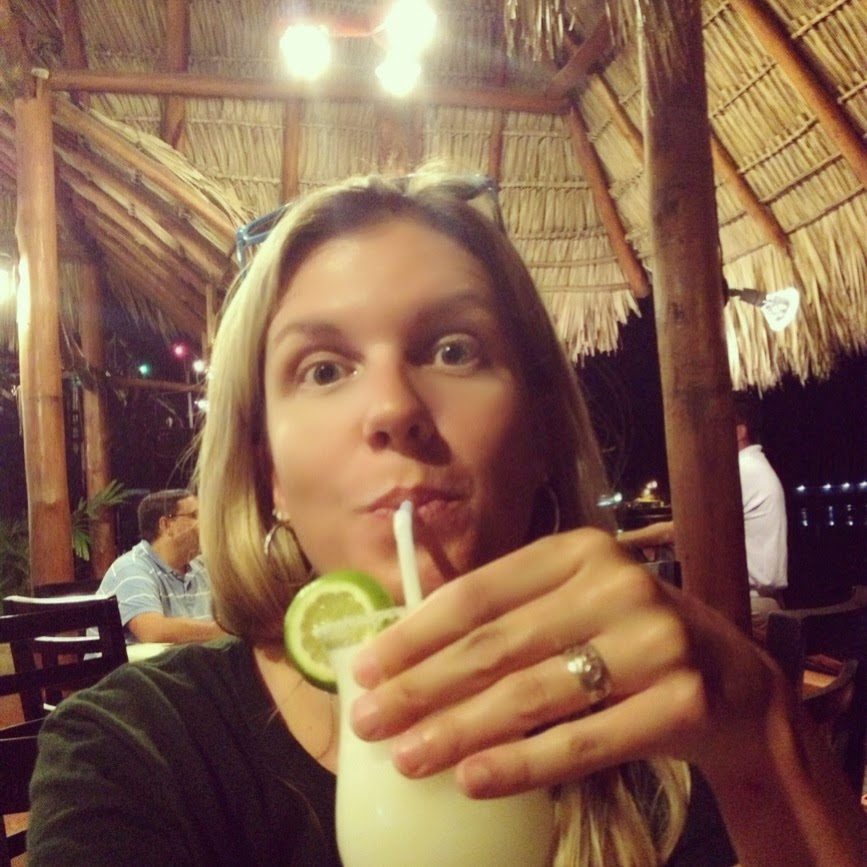 And we did manage to throw back a few hard liquor drinks. I suppose I'm not a complete lost cause.
Posted by Kate Brindle at 7:20 AM No comments:

On May 4, 2014, I ran my third half marathon. It ended up being a bit of a doozy in that I didn't really train for it (P.S. I don't recommend that), but I still had fun. And I added another medal to my collection. Granted, it was the equivalent of a 'You're Special' ribbon that pre-schoolers get just for doing something that everyone else in their class can do, but still, it was nice to feel it around my neck.

Oh yeah, and I made a video all about my experience.
Posted by Kate Brindle at 7:41 AM No comments:

So I did. I made it through my first year of law school at Michigan State University.

There were definitely times when I felt like I couldn't.  There were sleepless nights (due either to stress/insomnia or needing the time to finish all of my work). There were tears (especially after taking my first final, which I was convinced I failed. I'm happy to report, I did not.). And there were many questions (specifically, "you're in your 30's, all of your friends have houses and families, what are you doing going back to school?" and "how in the world am I going to do all this reading?/how in the world am I going to pay all these bills?").

There were times when I was filled with doubt, and the voices that told me I never should have left my job, should have followed Drew to Houston, etc. were hard to quiet.

Along the way, I met amazing people, and I realized that I am so lucky because I have quite the support team in my corner.  Whenever I needed someone or something, it somehow seemed to appear. When I needed someone to listen to me cry, I was gifted with a willing ear. When I needed make-up notes from a class I missed, one of my new friends provided me with those. And when I needed some home-cooked meals, my mother loaded me up with tupperware full of them. I received countless check-in calls and cards of encouragement, and I even got a care package of homemade marinara sauce and pickles (thanks Tim!). To say I'm grateful for the awesome people in my life would be an understatement.

-the parking meter enforcers at MSU are no joke; I'm pretty sure I spent more on parking tickets than I did on books

-it's possible to need Botox after one really tough semester (that's right, I said need. Pumping your face full of botulism moves beyond a mere want once stress has caused you to have an eleven permanently engraved between your eyebrows)

-free food always tastes the best, and there's not a lot I won't do to get it

-procrastination is not your friend

-nor is the Bluebook

-wine, however, is definitely your friend

-I actually kind of dig wearing suits (and posing like a news anchor, as evidenced below) 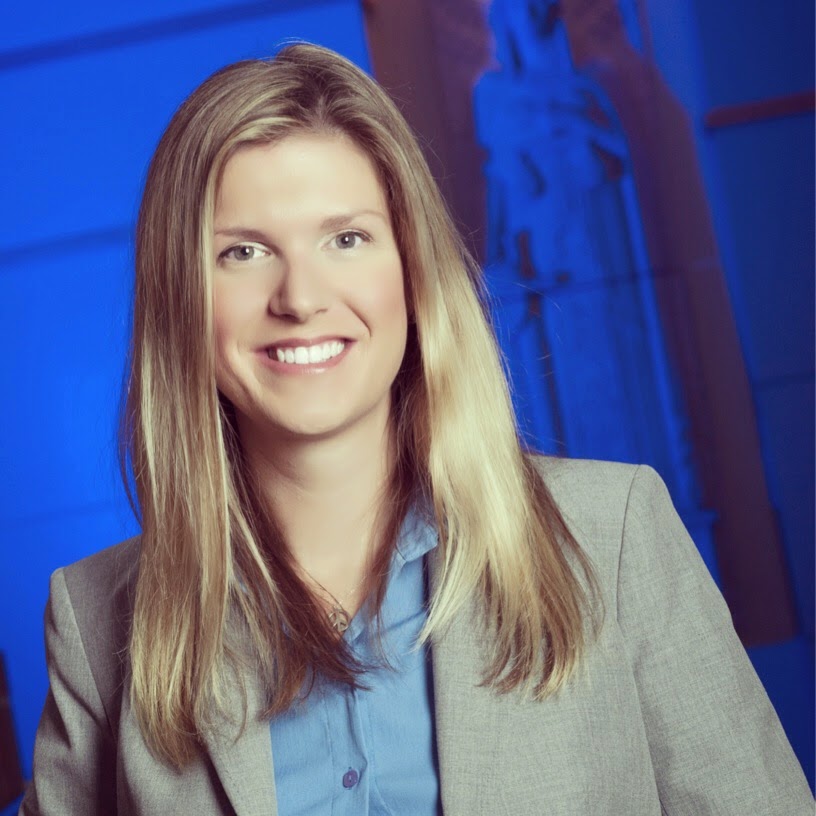 Posted by Kate Brindle at 12:11 PM No comments: